This Indian butter cauliflower recipe takes just 30 minutes to make, fits perfectly in many diets, and makes a super healthy and delicious lunch or dinner. 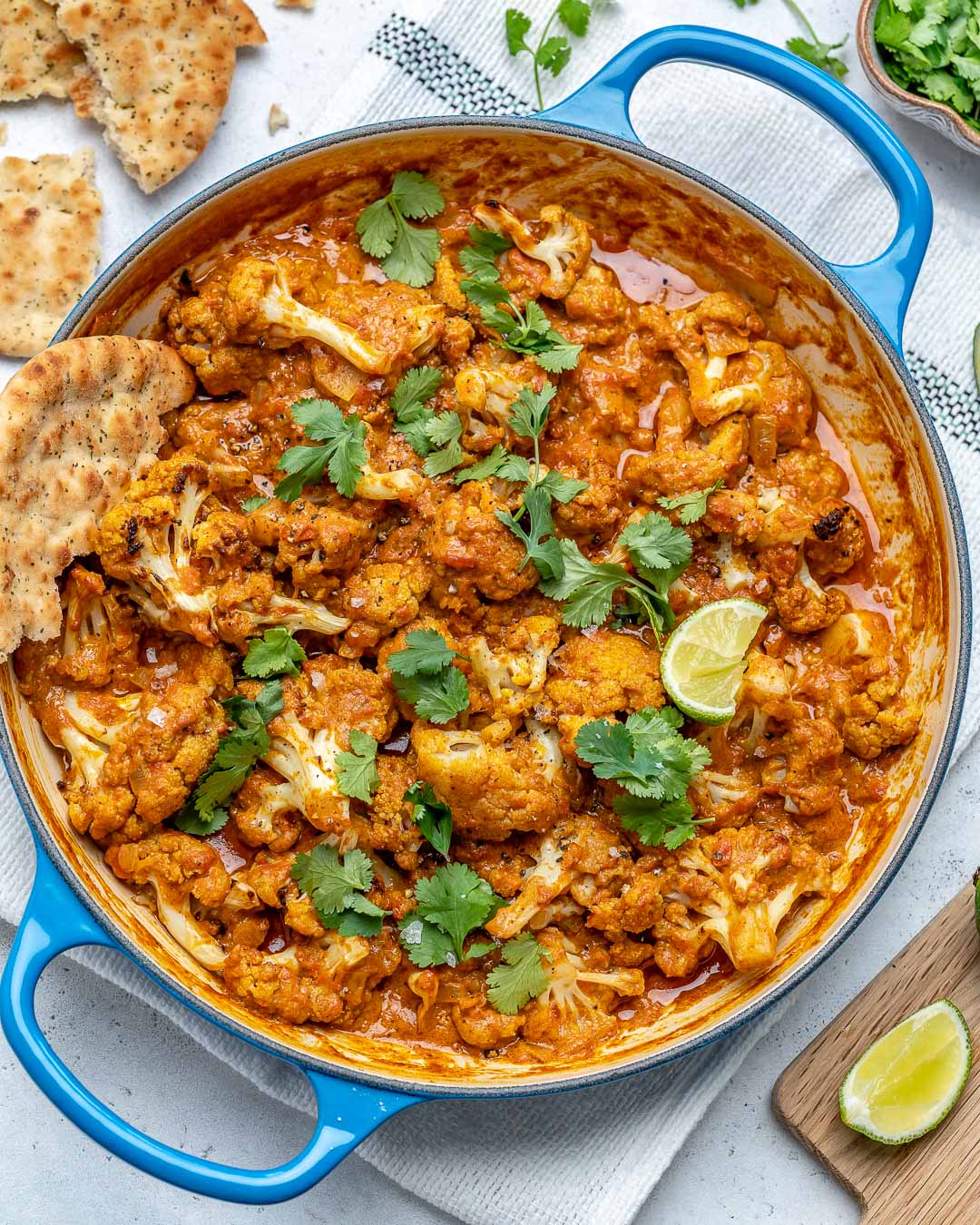 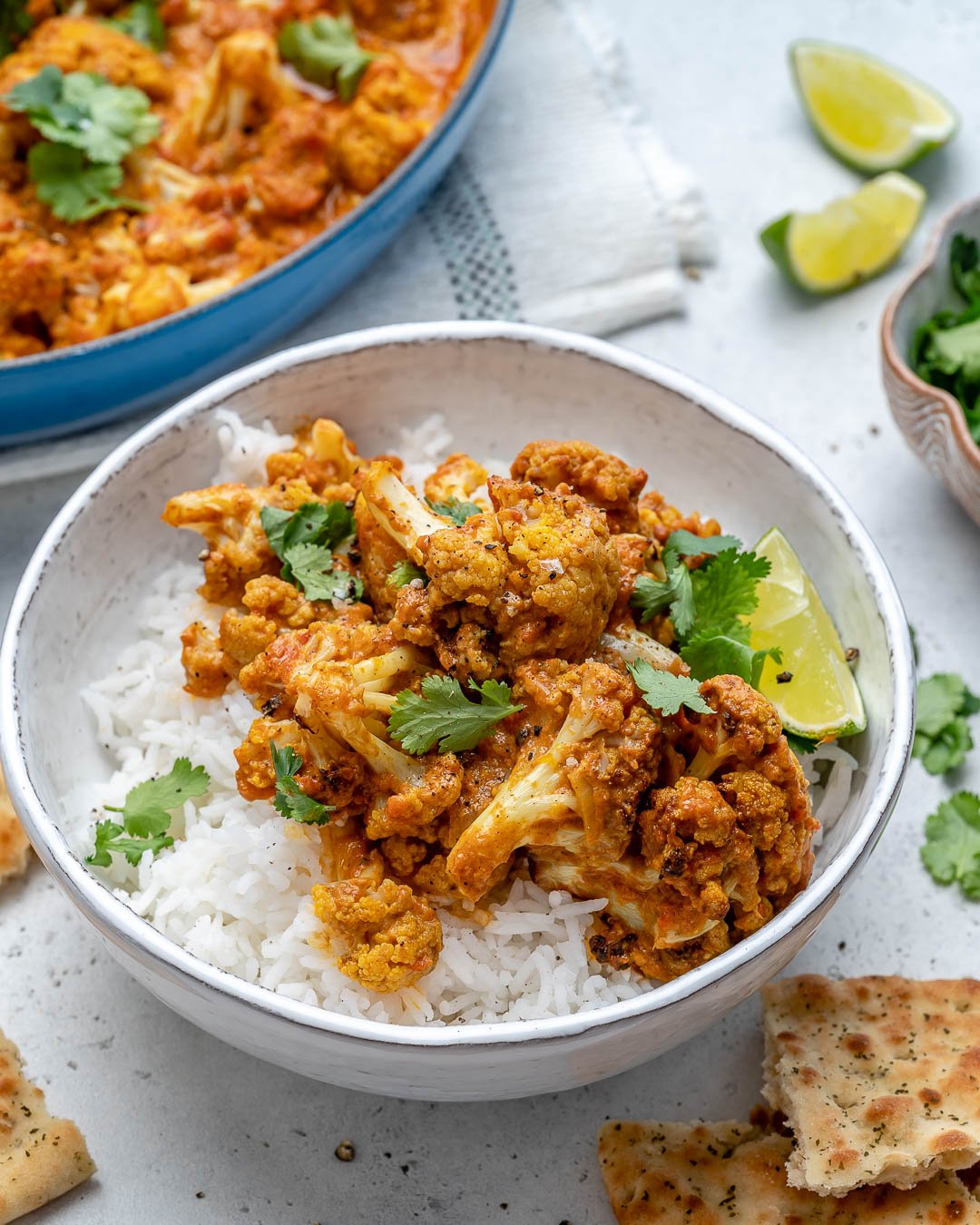 Oh, and it’s so easy even a kid can make it; it’s really one of my best 30-minute lunch or dinner ideas.

And if that doesn’t make you want to run to the grocery store for cauliflower and make it straight away, then perhaps my Tips & Tricks will. 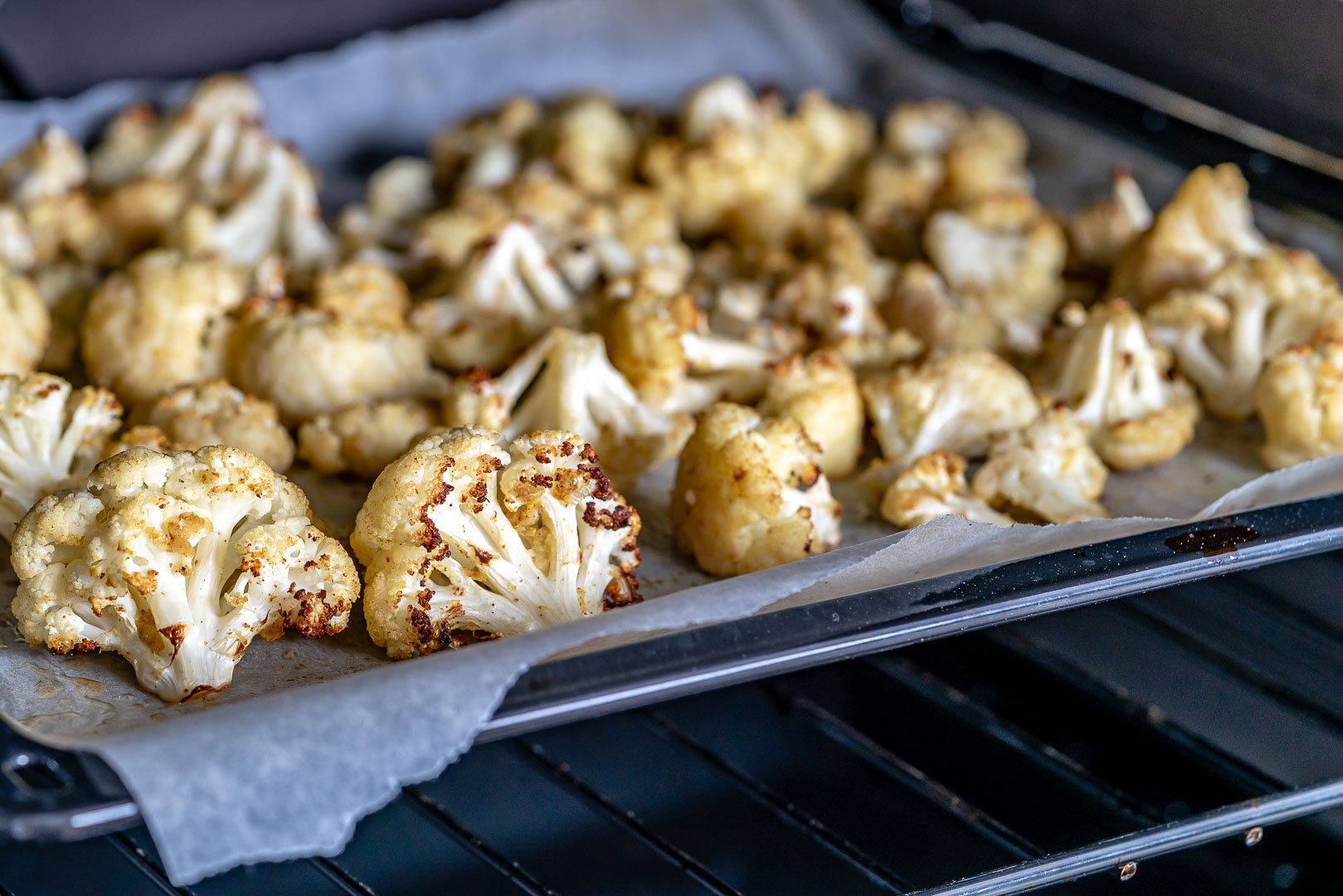 So here’s what you’re gonna learn if you stick around:

So stick around ’cause it gets yummylicious. 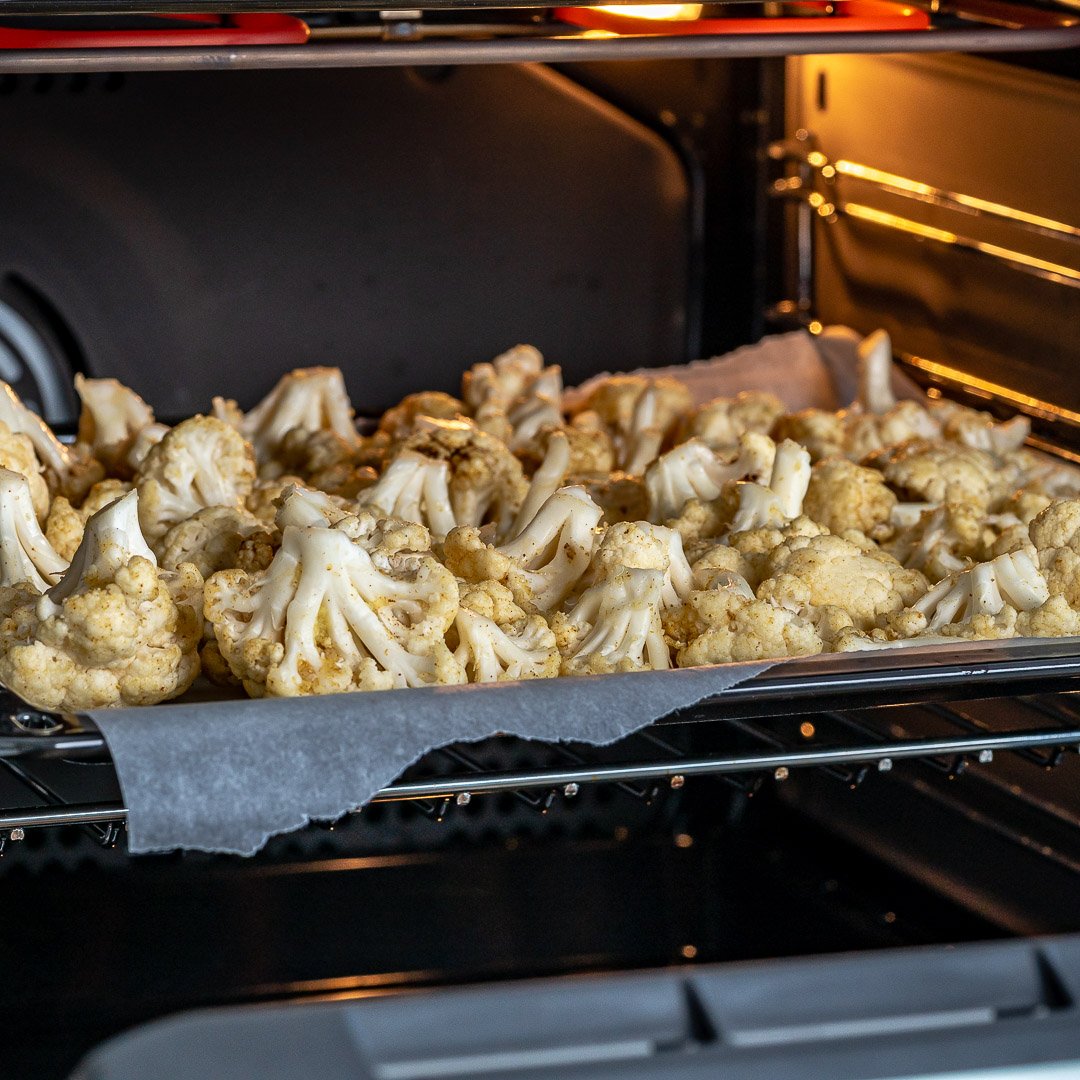 1. Which ingredients can be replaced in this vegan butter cauliflower recipe

You can replace coconut oil* with vegan butter if you want to keep it vegan. If not, you can use normal unsalted butter, ghee or clarified butter.

I personally love coconut cream flavor and that’s why I use it very often in my recipes but I know that tastes can vary and this may not be your cup of tea. In this case, you can substitute coconut cream with heavy cream but bear in mind that it won’t be vegan anymore.

Also, it’s worth noting here that coconut cream is different than coconut milk. 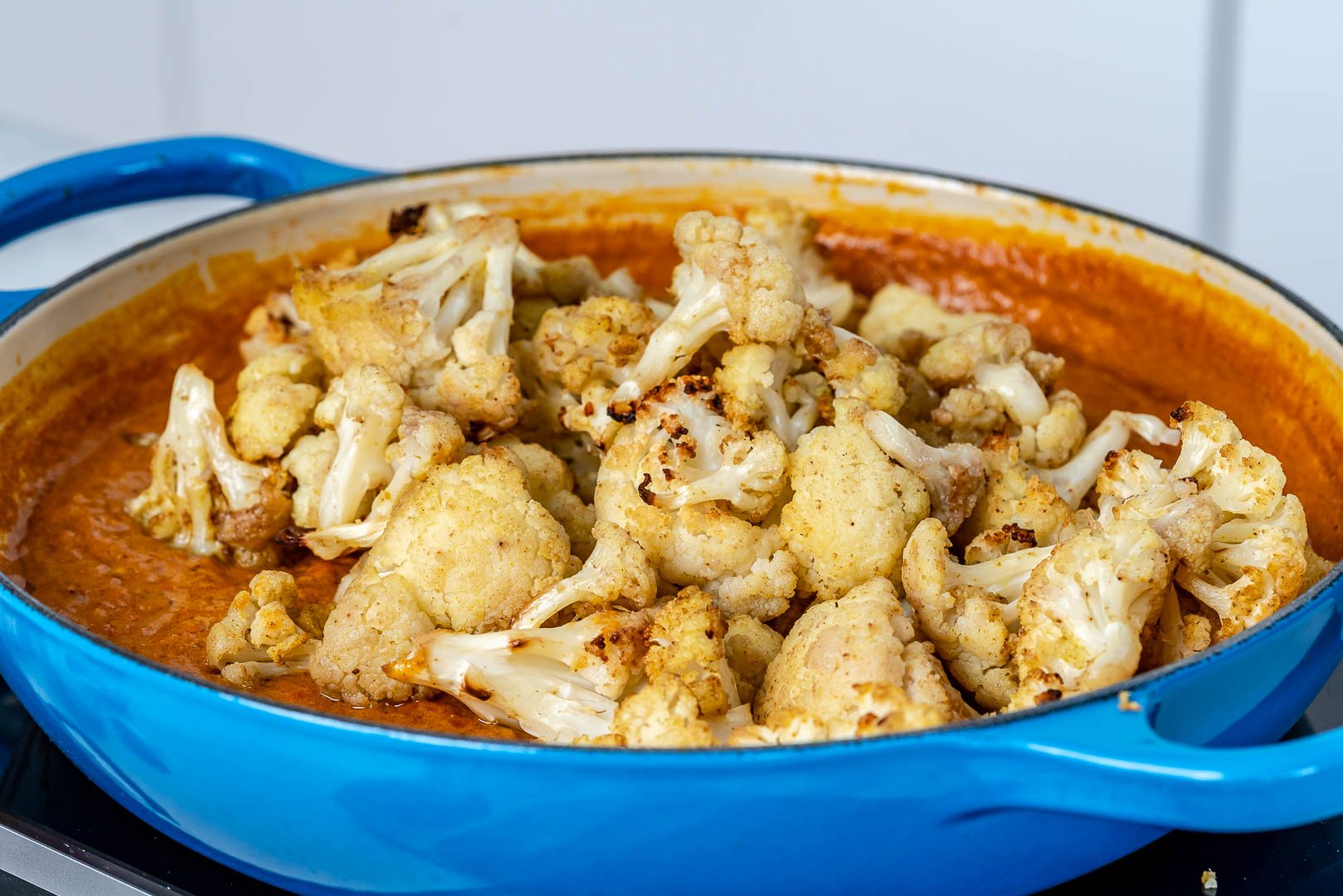 2. Try it with grilled cauliflower

Another thing that you can change in this recipe is the way you cook the cauliflower.

I broiled it and it came out super delish but I strongly recommend you to try it with grilled cauliflower as well.

Grilling veggies and protein enhances their natural flavors and those grill marks add a delicious smoky flavor too.

The recipe would be pretty much the same, the difference is that you’d have to grill the cauliflower instead of broiling it. Keep in mind that you will have to break the cauliflower into large chunks or slice it into ‘steaks’ so it won’t drop between the grill bars. 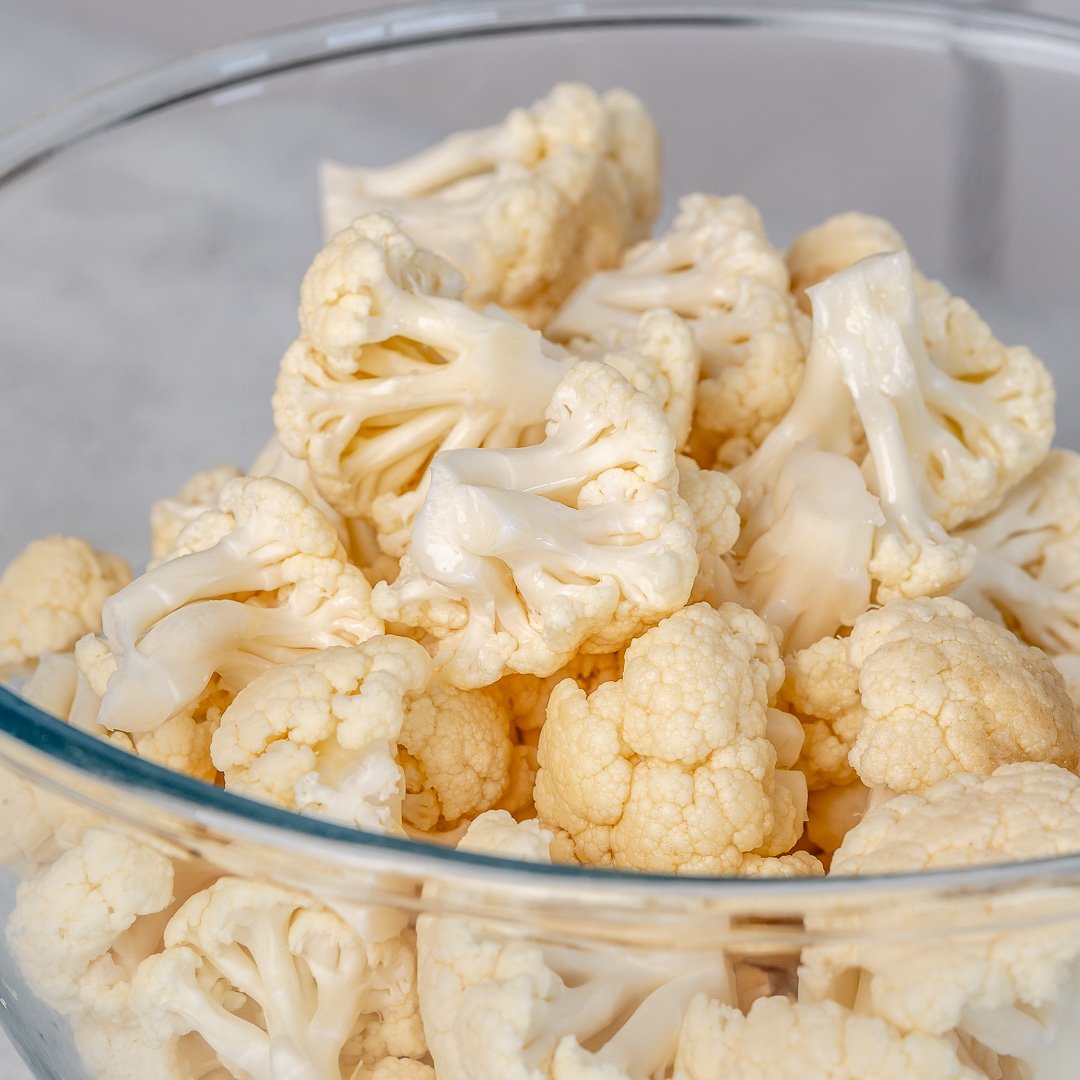 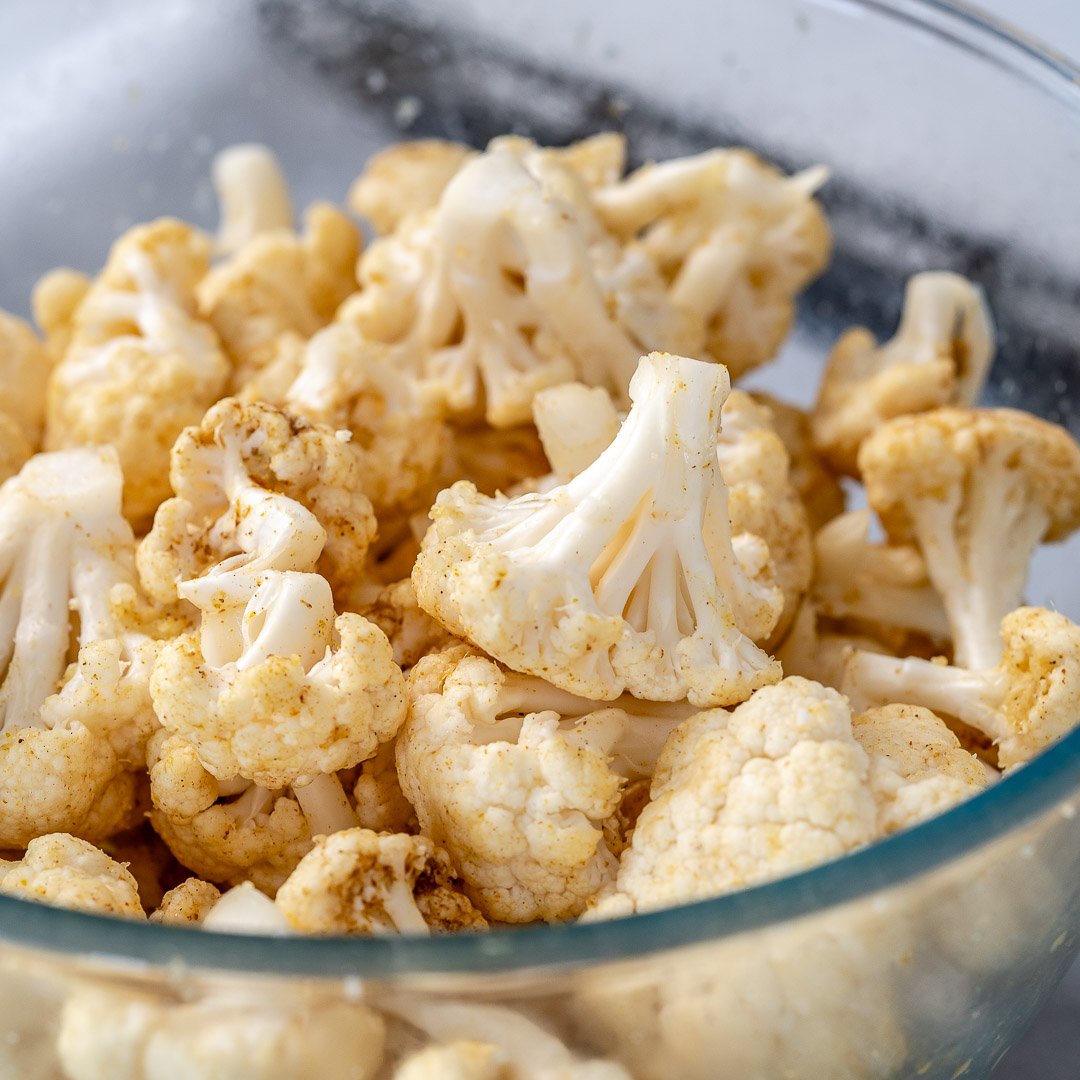 So if you live in the warmer parts of the world, fire up the grill and start grilling cauliflower.

3. What to serve with vegan butter cauliflower 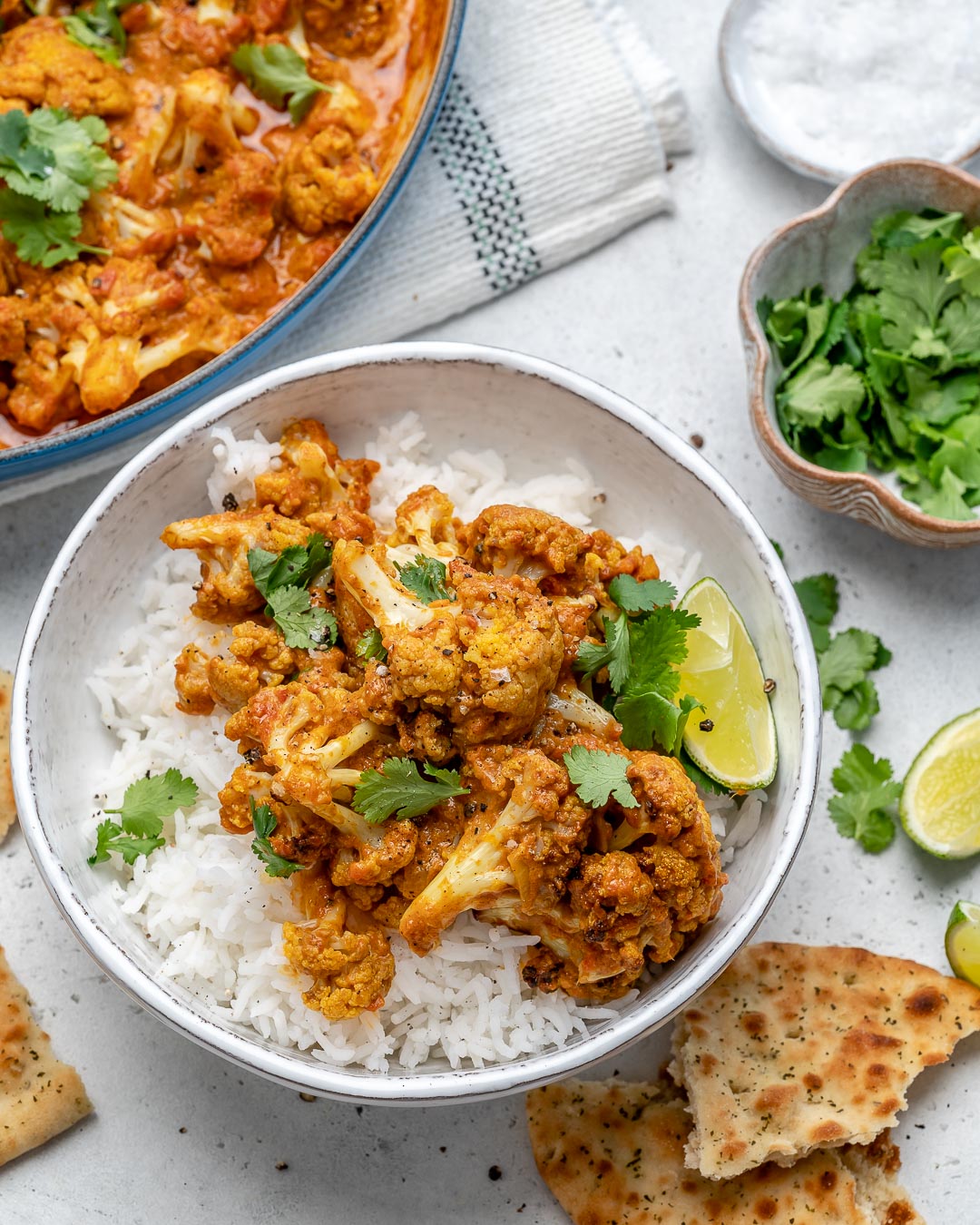 Here are a few side ideas that go perfectly with this butter roasted cauliflower:

Now let’s go further and see how to make a version of this Indian butter cauliflower with meat. Vegans will probably not like this next section so they might want to skip to the next one.

4. How to make Indian butter cauliflower with meat 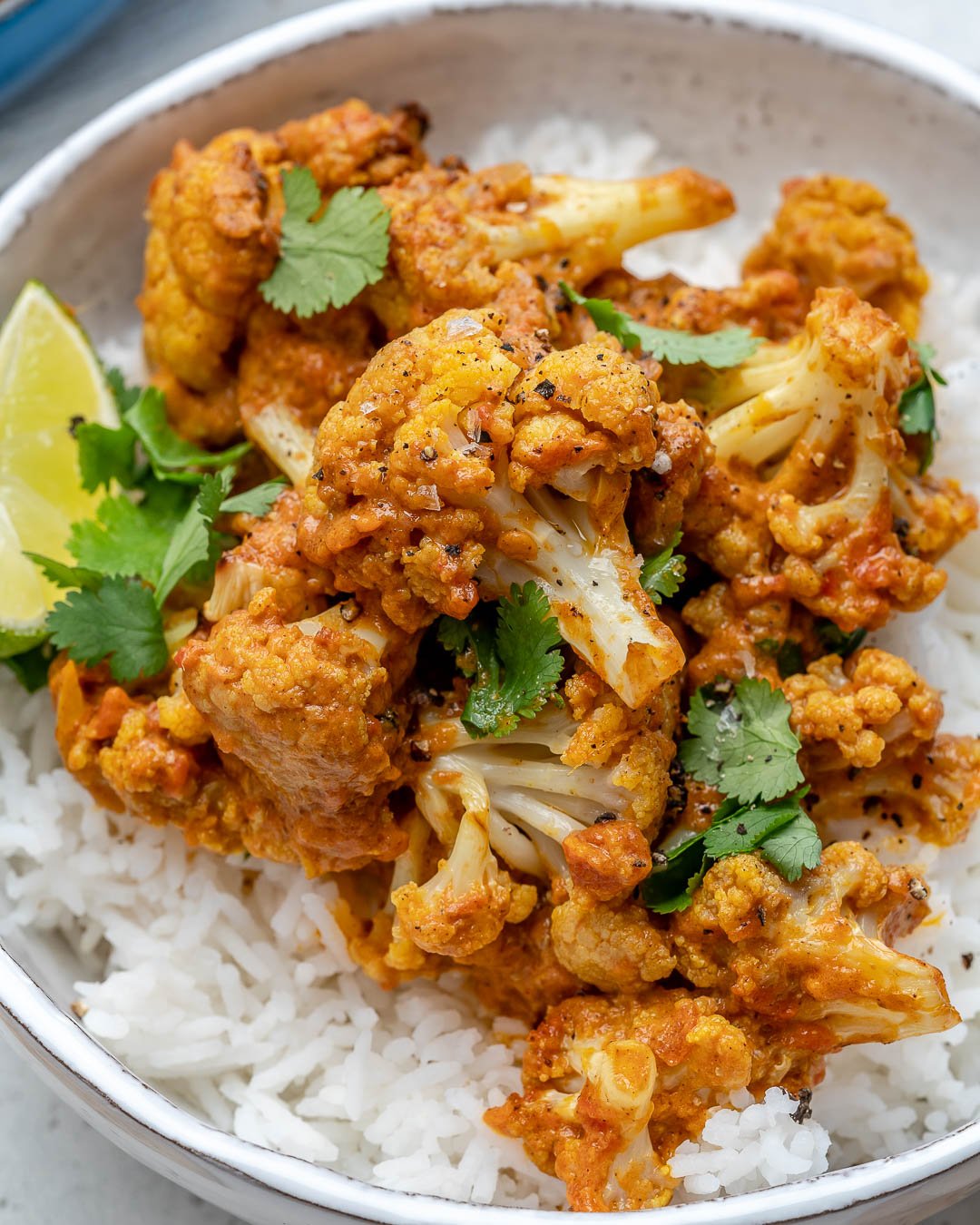 If you use dairy butter instead of coconut oil and chicken rather than cauliflower you’ll get the popular Indian butter chicken.

The cooking method would be pretty much the same. You’d have to cut the chicken in bite-sized pieces, then season it with spices, garlic, ginger and olive oil. Then you can either let it marinate between 30 minutes and 2 hours or cook it straight away.

Cook the chicken until nicely browned and cooked through, then set it aside on a plate. Then make the Indian sauce as in the butter cauliflower recipe below.

Once the sauce is done, stir in the chicken and the juice left in the plate, then simmer for a few more minutes until heated through.

You can also make this recipe with turkey or beef and the cooking method will be the same as for chicken.

Now let’s address a question that I often see about this vegan butter cauliflower recipe.

5. Is vegan butter cauliflower a curry? 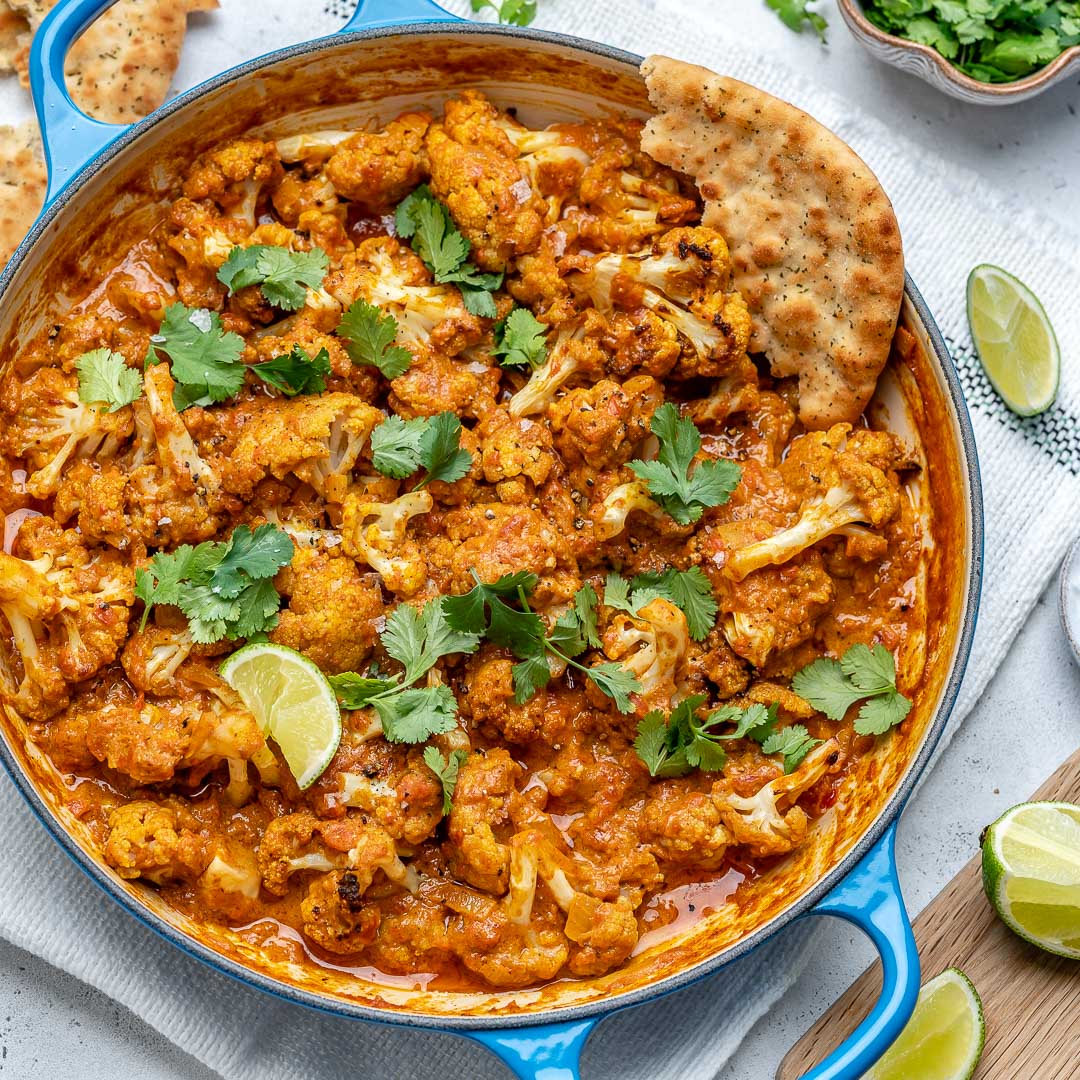 All dishes that originate from the Indian subcontinent and use a combination of spices such as coriander, cumin and turmeric, can be called curries. In India, they also use leaves from the curry tree to spice up their curries.

Furthermore, all dishes that include curry seasoning (paste and/or powder) can be called curries.

So we can say that the vegan butter cauliflower is a kind of curry too.

And if you love curries as much as I do, you gotta check these recipes out: 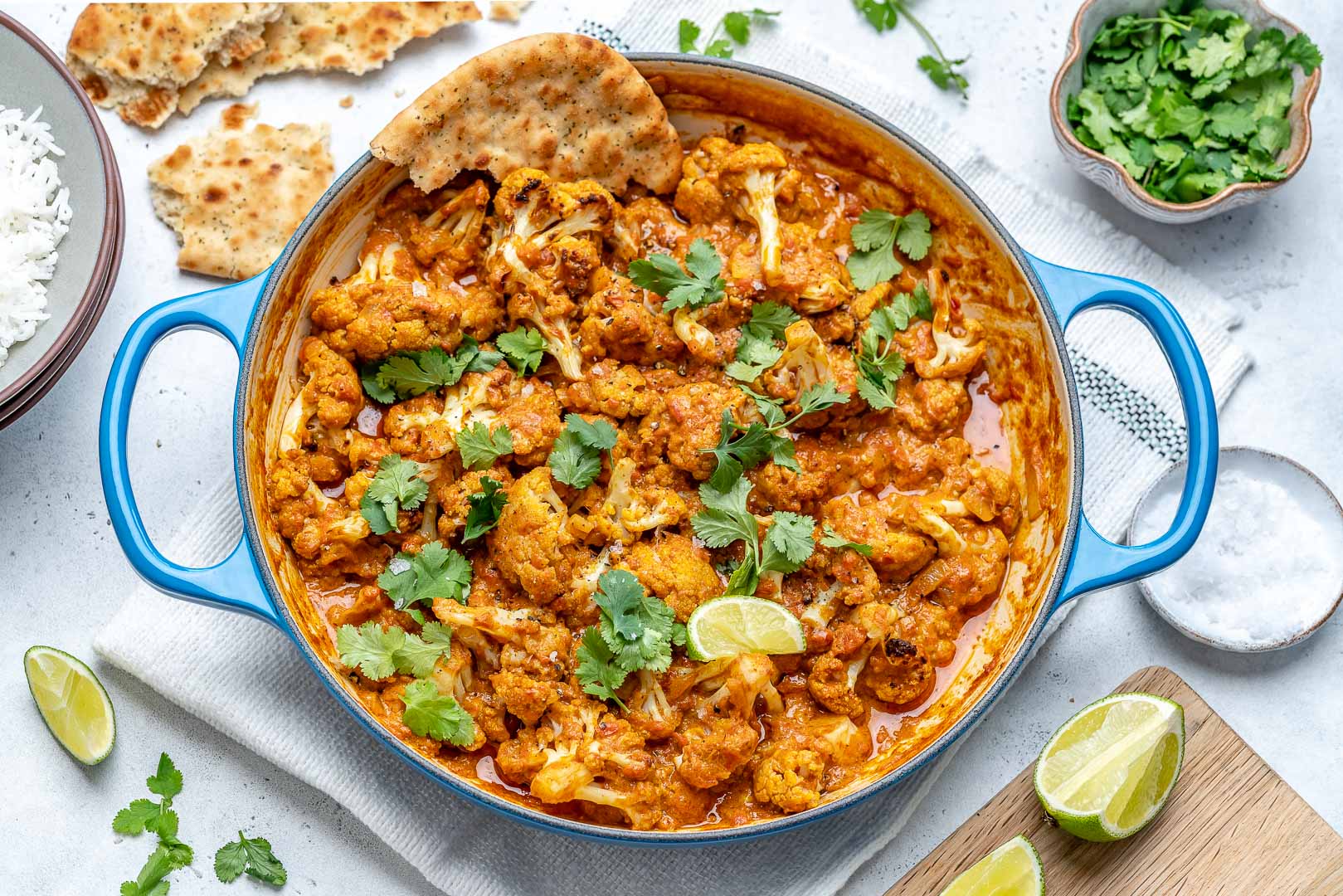 Now you should have a clear idea of how to make this butter roasted cauliflower recipe, so it’s time for the actual cooking. 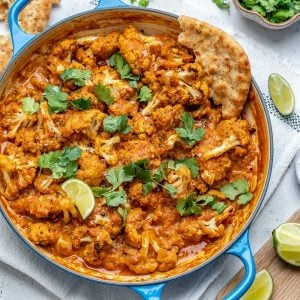 For the Indian sauce:

Please check the Tips & Tricks in the article before making this butter roasted cauliflower recipe. Below is just a summary: