These easy vegan chocolate brownies are gooey in the middle and fudgy on the sides. Everything a foodie could possibly ask from a dessert. 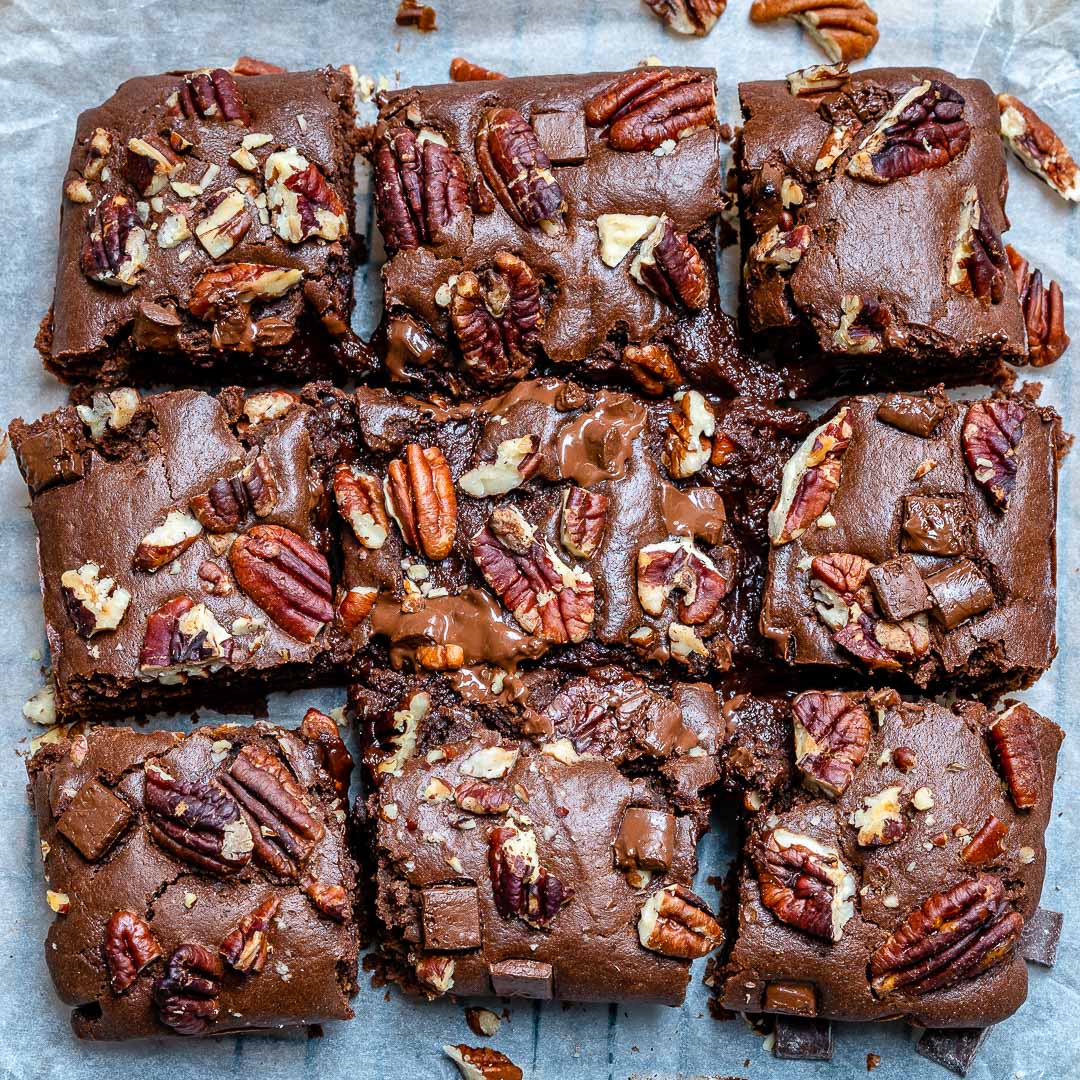 I mean, who can stay away from desserts during the holidays, right?

And if last week’s chocolate banana bread wasn’t enough for you, I thought I should also add some vegan chocolate brownies to your holiday dessert menu.

Mmm… how delish does that sound?!

And I know some people prefer gooey chocolate brownies, while others like’em fudgy, so guess what…

I made these vegan chocolate brownies gooey in the middle and fudgy on the sides to please all foodies.

That’s why I think this is one of the best vegan brownies recipe. They just bring everybody together which is wonderful especially for the holidays. 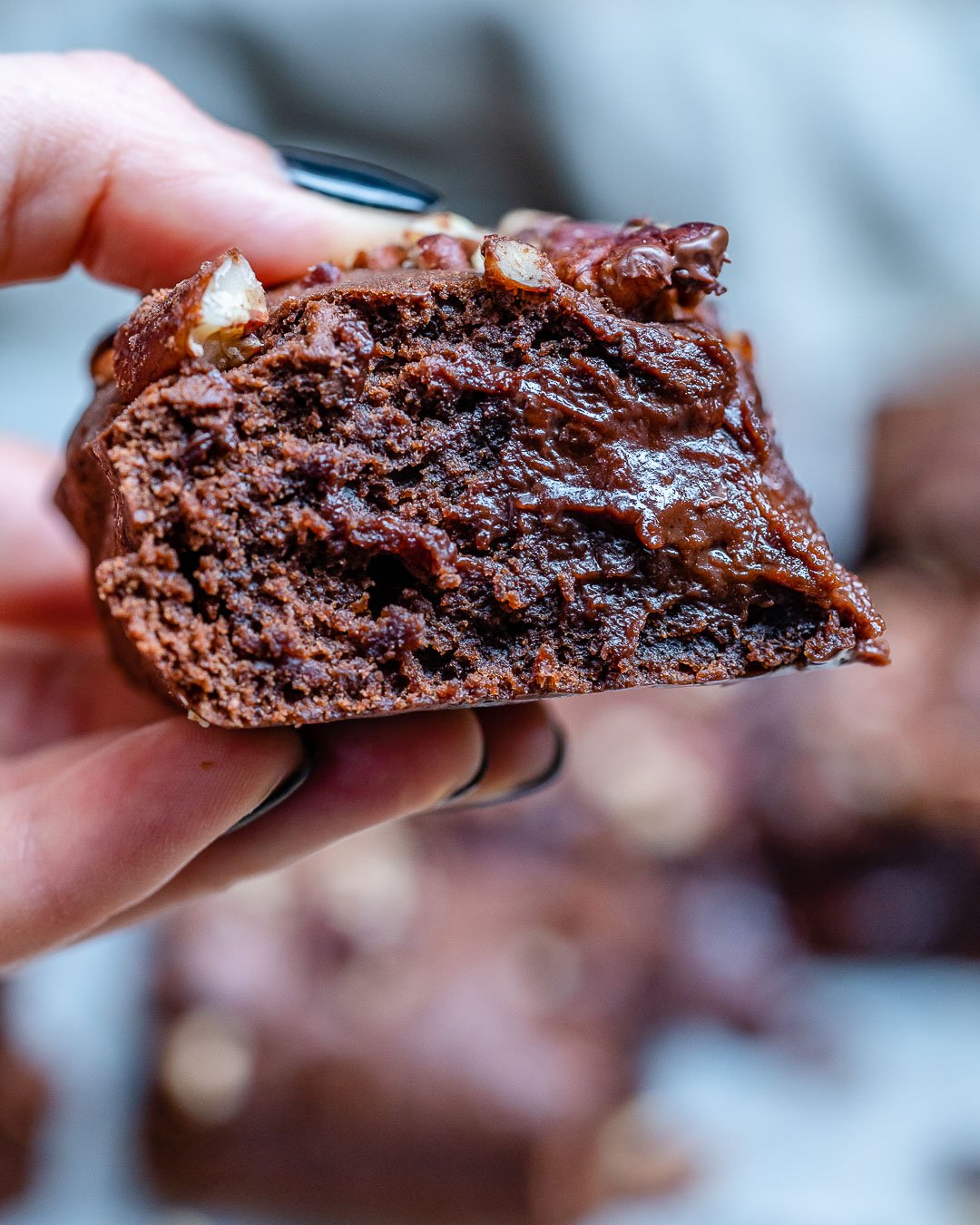 Do you know how long it takes to make this easy vegan brownies recipe?

About 10 minutes to prep and roughly 20 minutes to bake it. Quick, easy and delicious recipes are extremely useful during the holiday season because we all know you’re going to do a lot of cooking during this time.

And that’s another reason why I think this is one of the best vegan brownies recipes. You get to spend more time watching Netflix with your loved ones than in the kitchen. 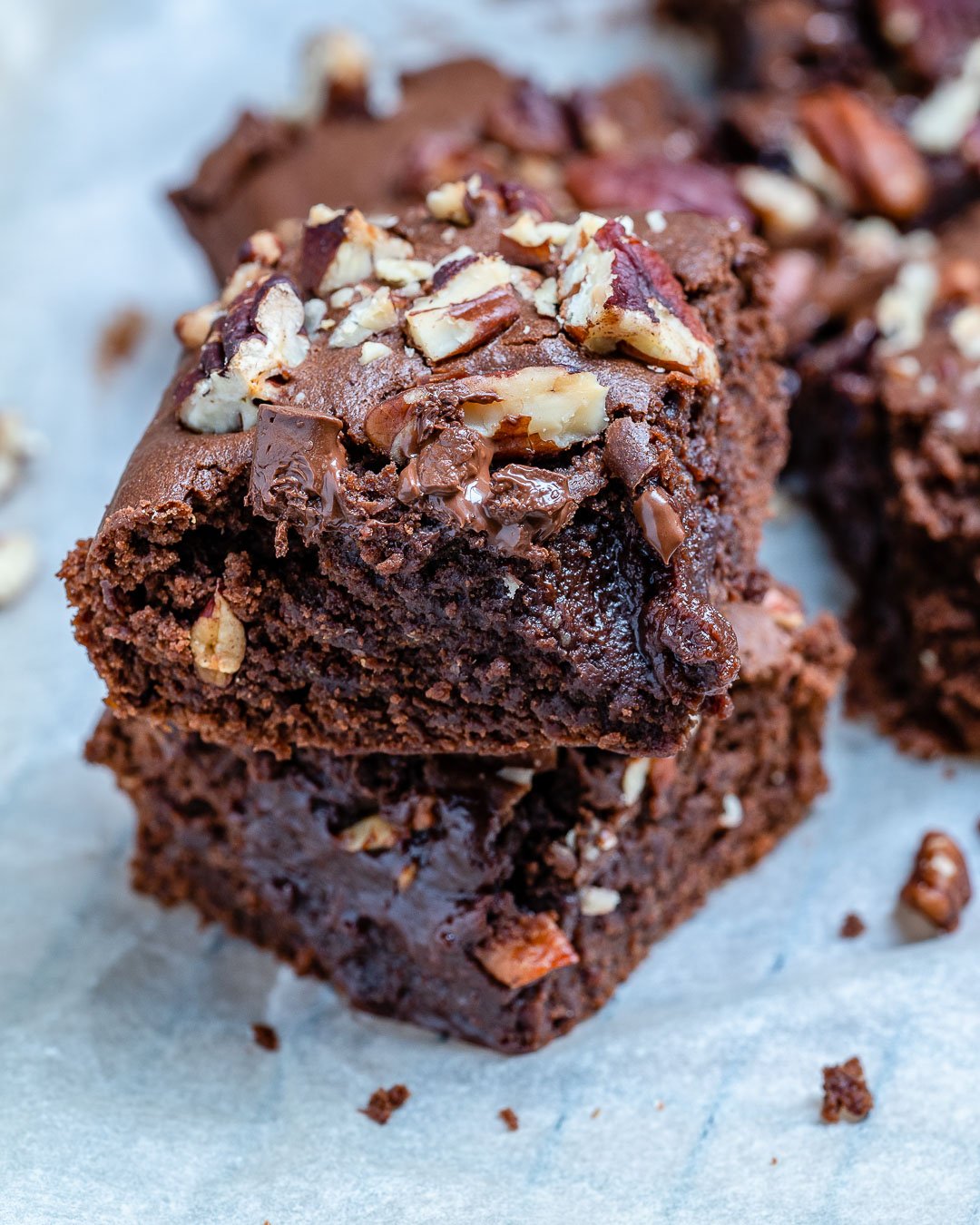 Furthermore, I came up with a list of useful tips and tricks to smooth up the process of making this quick and easy vegan brownies recipe.

They are also meant to help you get it right the first time because I want you to make the best holiday dessert from your first try. I know mistakes can happen, but we really can’t afford them during the holiday season, right?!

So let me show you how to make vegan brownies quick and easy. 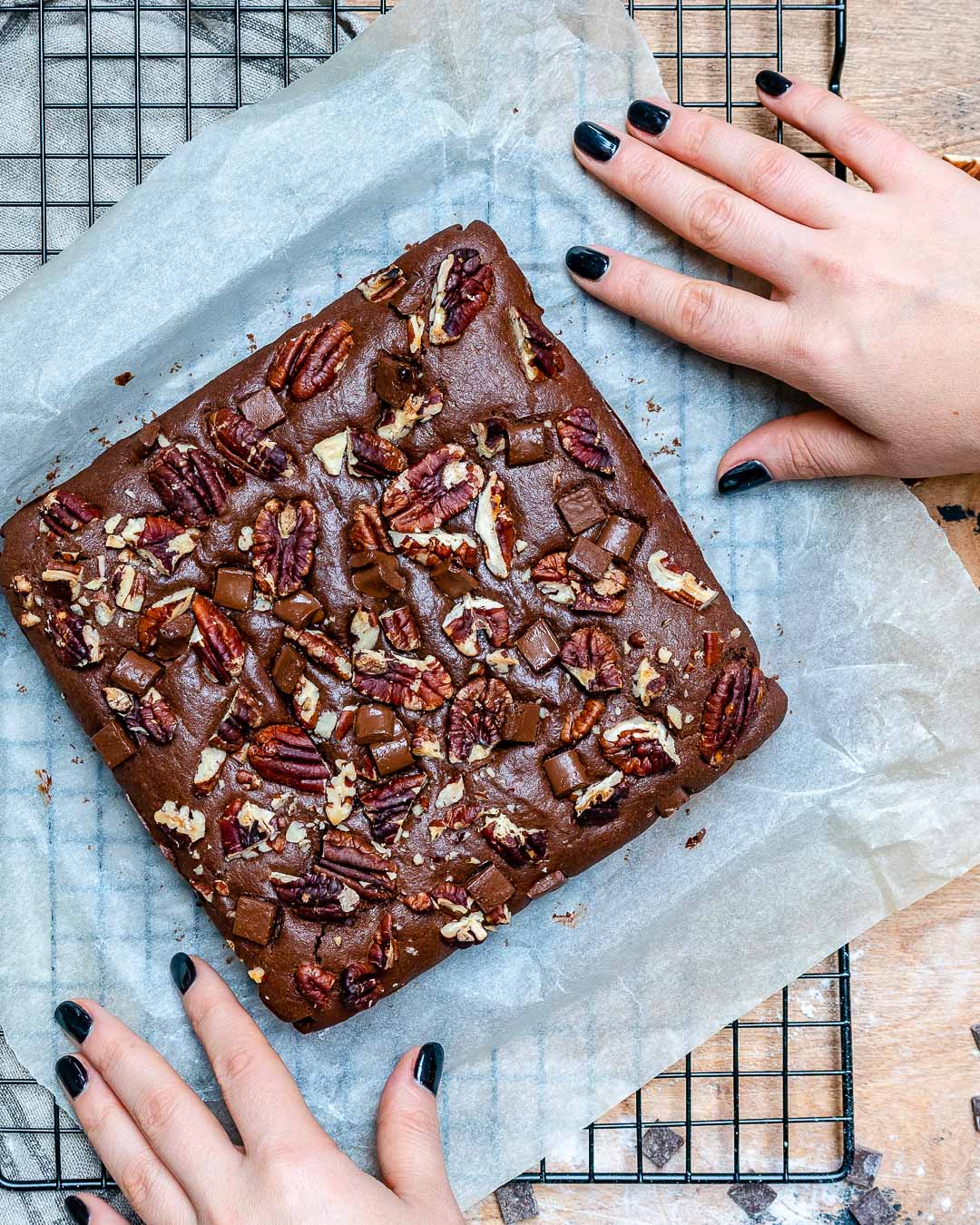 This is one of the most important things to remember when making this easy vegan chocolate brownies recipe.

If you don’t cook them enough, they will come out soft, almost soggy, similar to a badly cooked lava cake. And if you cook them too much, they will get spongy. Not what we’re aiming for.

When it comes to vegan chocolate brownies you want them perfectly balanced. You need to feel the gooey texture first, then the chewy fudge must come in and balance everything, and then the whole mix should deliciously melt into your mouth.

That’s the perfect vegan chocolate brownie and we shouldn’t settle for anything less. 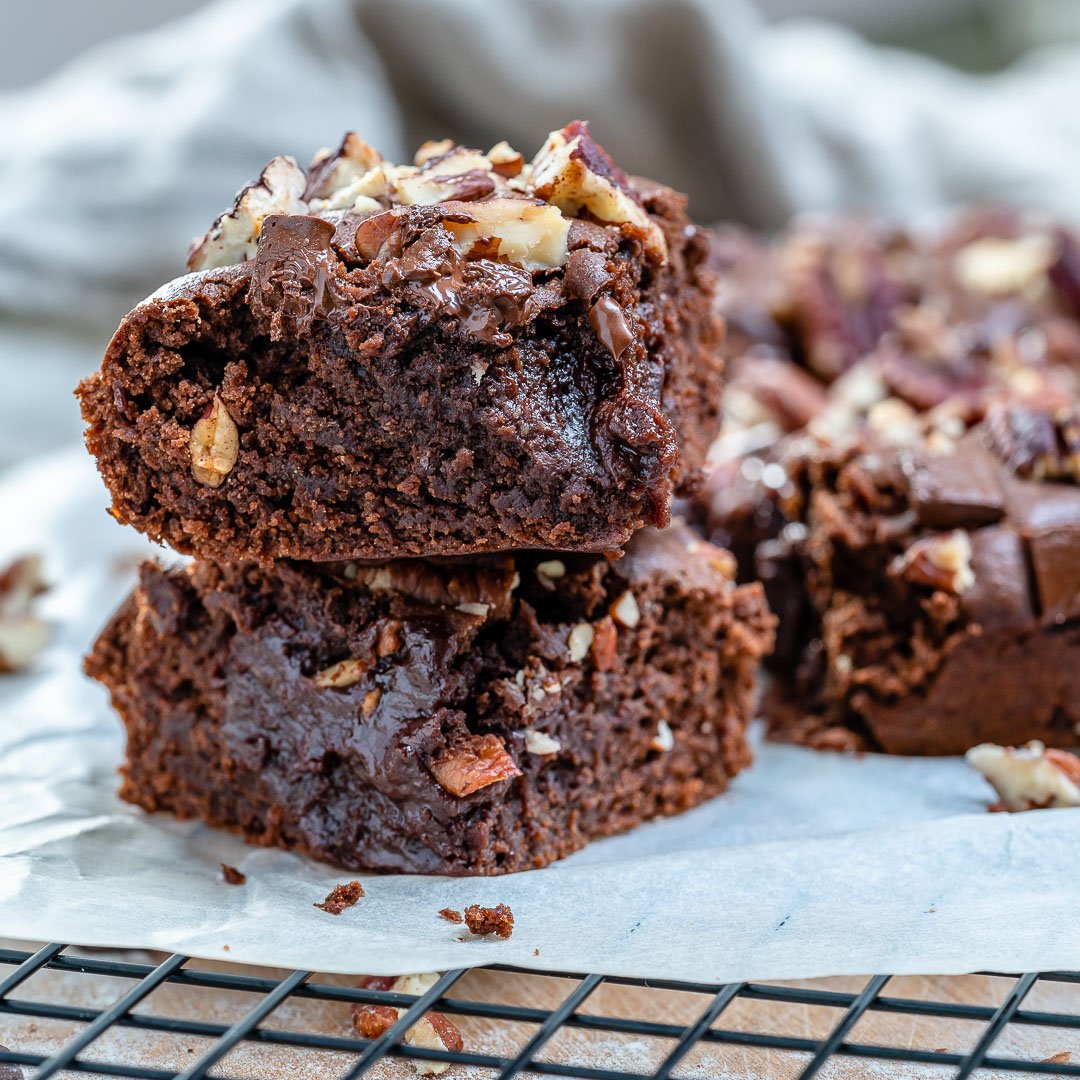 And for that, you need to keep an eye on them while they’re cooking. If the top starts to get too brown, you should cover the tin loosely with baking paper.

It’s worth noting here that the pecans can get roasted very fast so that should be a good indicator of when you need to cover the vegan chocolate brownies.

Another thing to remember is that after you take it out of the oven, it will harden slightly while cooling.

Now that you know how to make vegan brownies gooey and fudgy at the same time, let’s see how to serve them.

2. How to serve vegan chocolate brownies 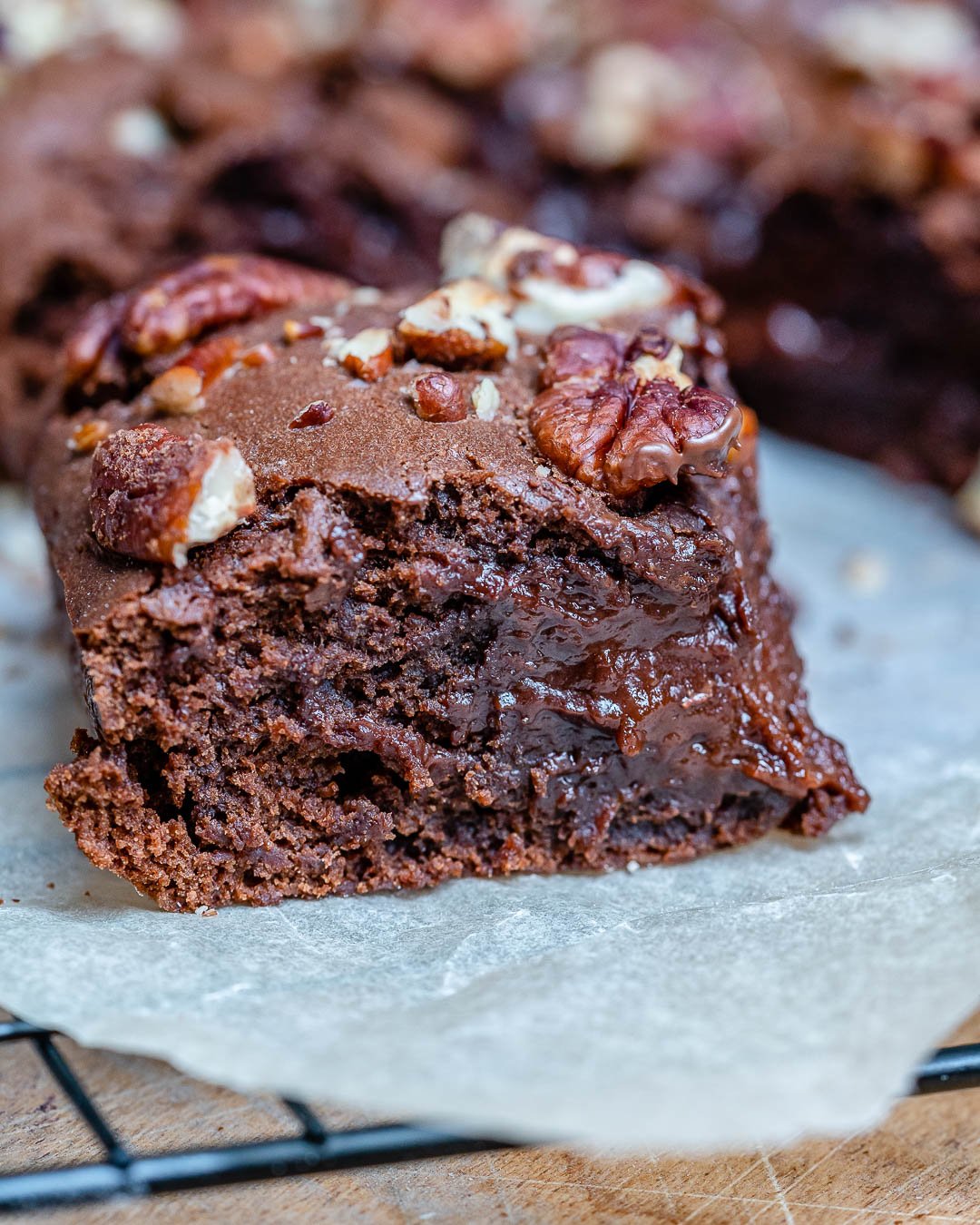 These vegan Chocolate brownies are best served slightly warm because that’s when their texture is perfect. That’s when they are gooey in the middle and fudgy on the sides.

You can keep them in the fridge for up to 5 days or on the countertop, in an airtight container, for up to 3 days. But keep in mind that they will harden when refrigerated and they will turn fudgy.

They will still be super delicious but if you like them gooey make sure you gobble them up while they’re still warm.

Well, I don’t think that’s going to be a problem especially if you have guests over but it’s worth mentioning. 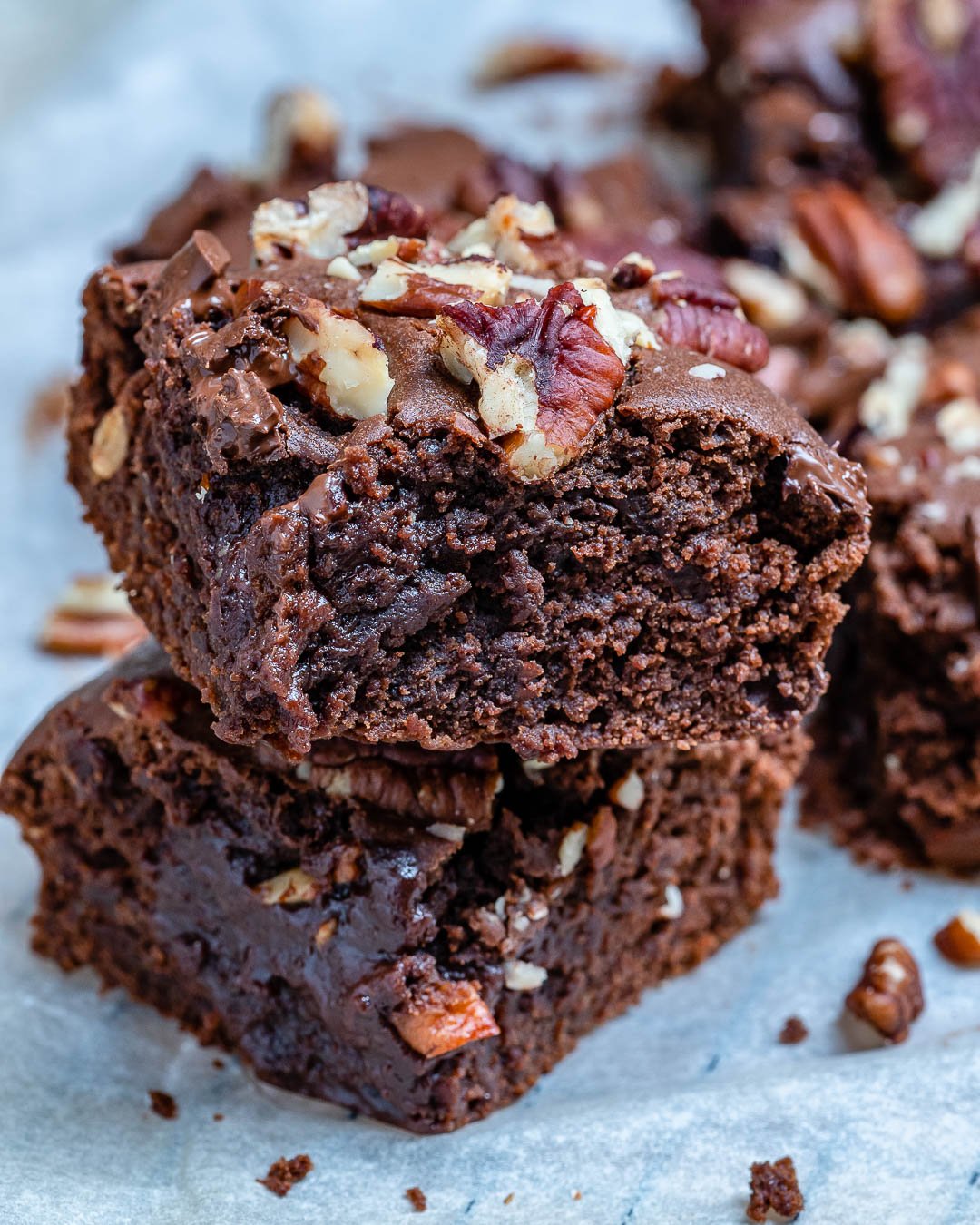 And if you want to make them even better, here’s a tip.

Serve each brownie with a scoop or two of your favorite ice cream. Caramel and pralines is the one that I like most, so I think this combo is insane, probably one of the best desserts ever.

3. Adjust this easy vegan brownies recipe to your taste 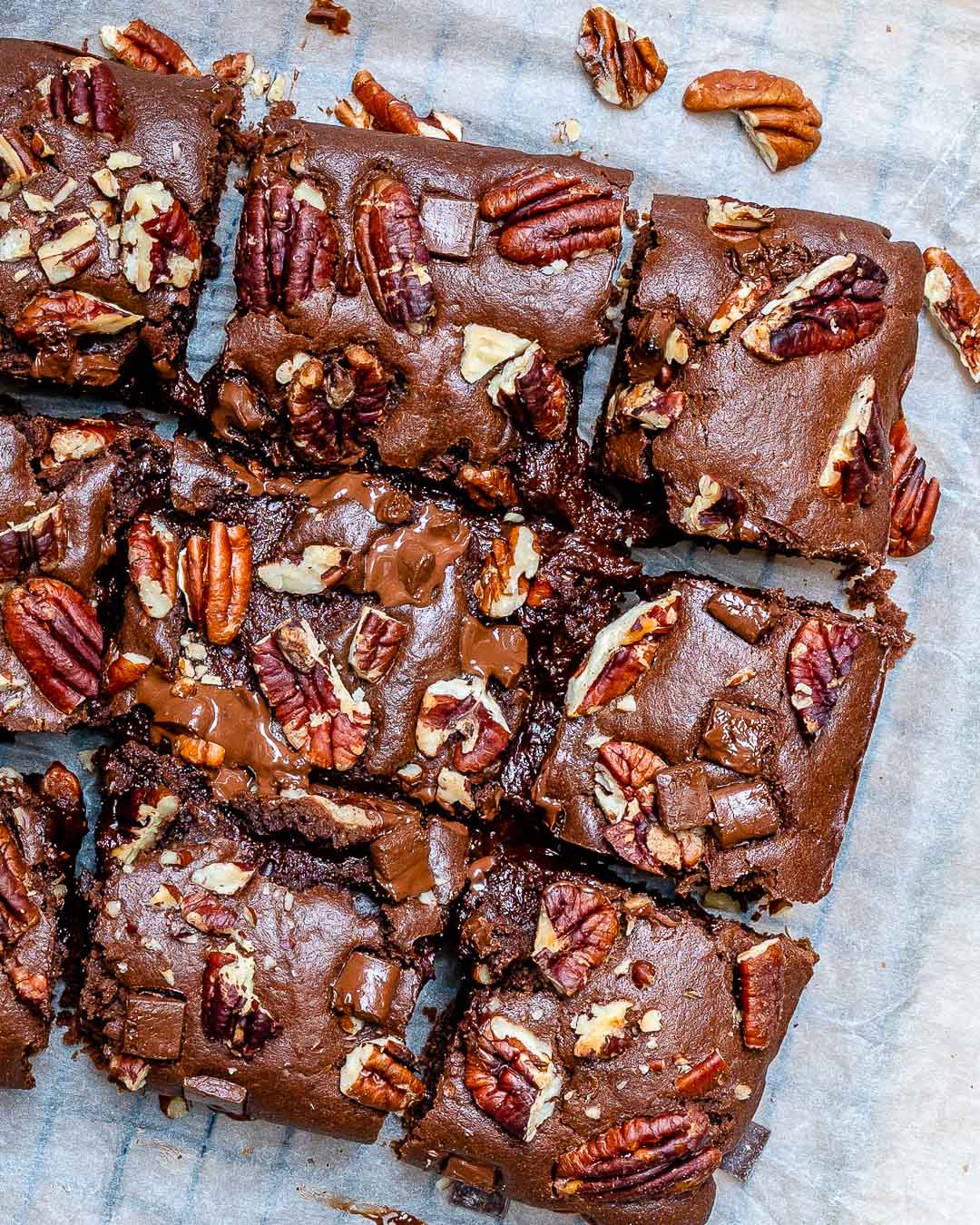 These tips are for the creative foodies, who just can help themselves from bringing their own touch to every recipe they make.

The ingredients in this easy vegan brownies recipe are quite simple and I honestly wouldn’t change a thing. But here are a few that can be replaced without altering the taste and texture. 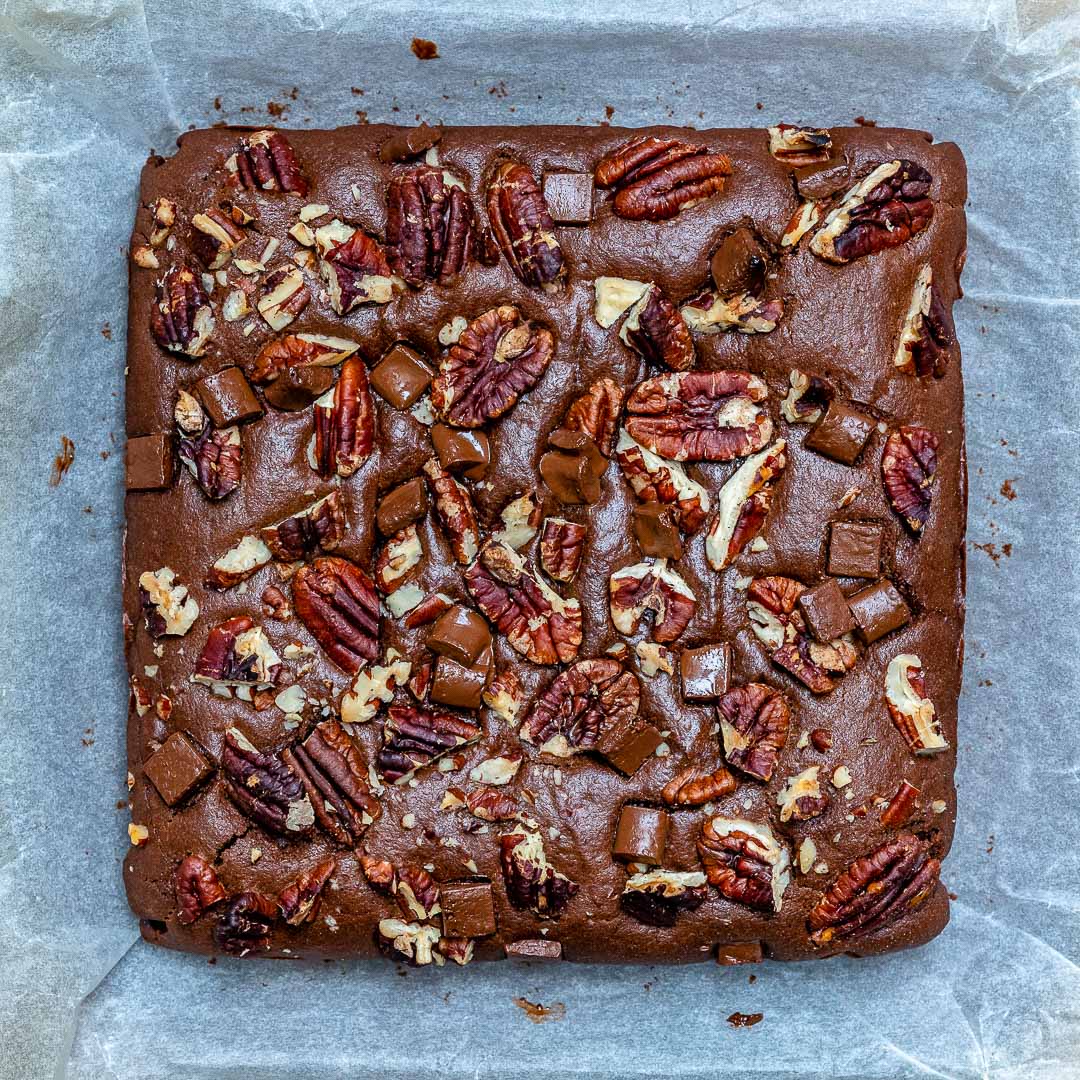 But remember… If you want to replace the ingredients in any recipe, I think you should only do it if you are experienced in cooking. Otherwise, it may be best to stick to it because you can easily mess everything up.

And now, the last trick for this easy vegan chocolate brownies recipe is…

4. Which chocolate is best for making easy vegan brownies 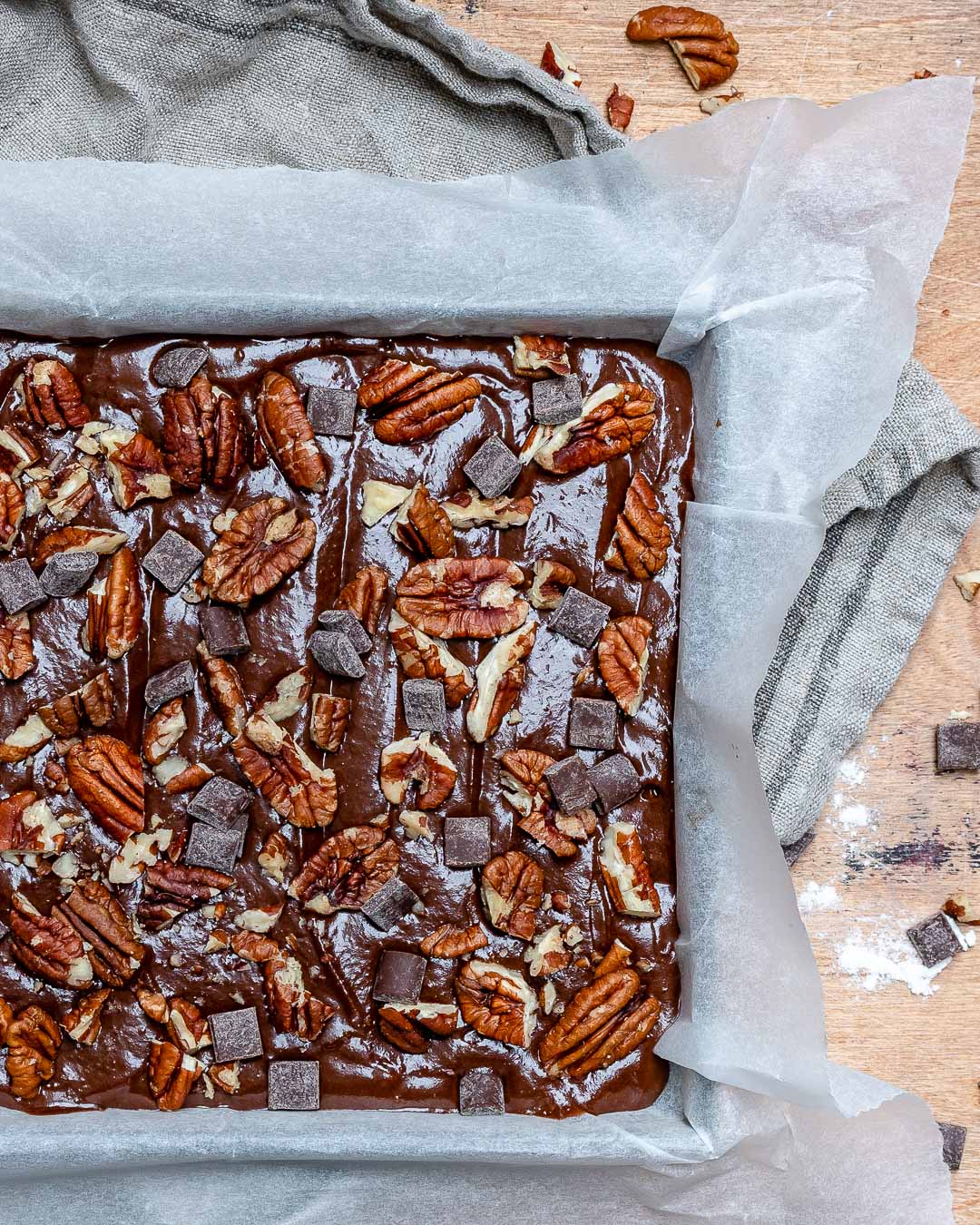 This is very important if you want to make the best vegan brownies recipe.

I used chocolate chips with a minimum of 45% cocoa and no milk. Really important if you want to keep it vegan.

These are perfect for baking and they form a chewy texture which remains like that even after the brownies harden in the fridge.

As I said above, these easy vegan chocolate brownies will lose that gooeyness once you keep them in the fridge, but they will still be chewy if the chocolate is good.

When you pick the chocolate, make sure it’s made with raw cocoa powder and search for organic, fair trade and non-GMO certified. 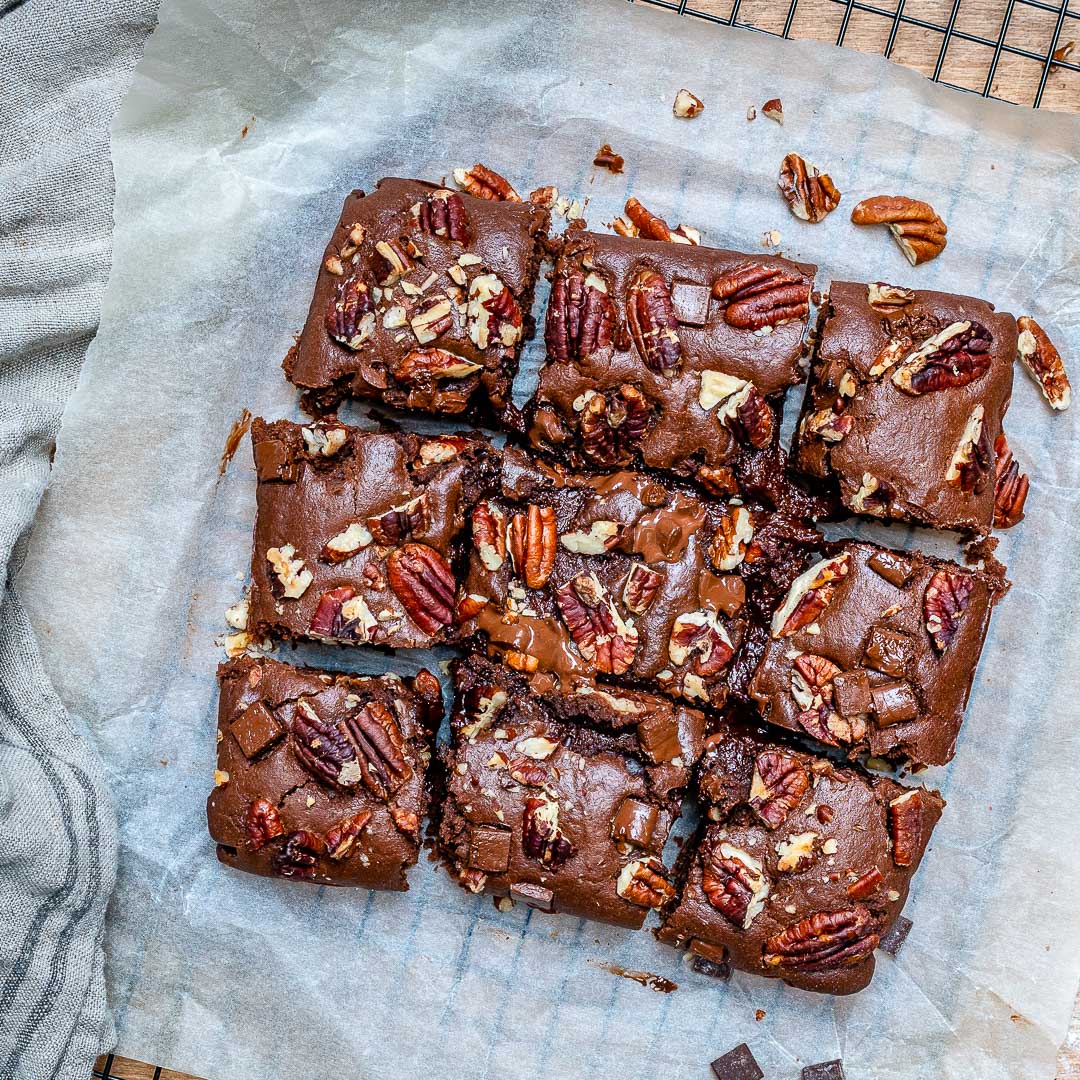 This was everything you needed to know to make the best vegan brownies recipe. Now it’s time to put it all into action.

And after you do that, don’t forget to snap a shot and post it on Instagram using the tag @theblondelish and hashtag #blondelish

Please read the Tips & Tricks in the article, before making this easy vegan chocolate brownies recipe. Below is just a summary: