This easy shakshuka recipe is the perfect breakfast, nourishing and incredibly tasty. I learned it when I worked at Ottolenghi, gave it my own touch and now I am passing it on to you. 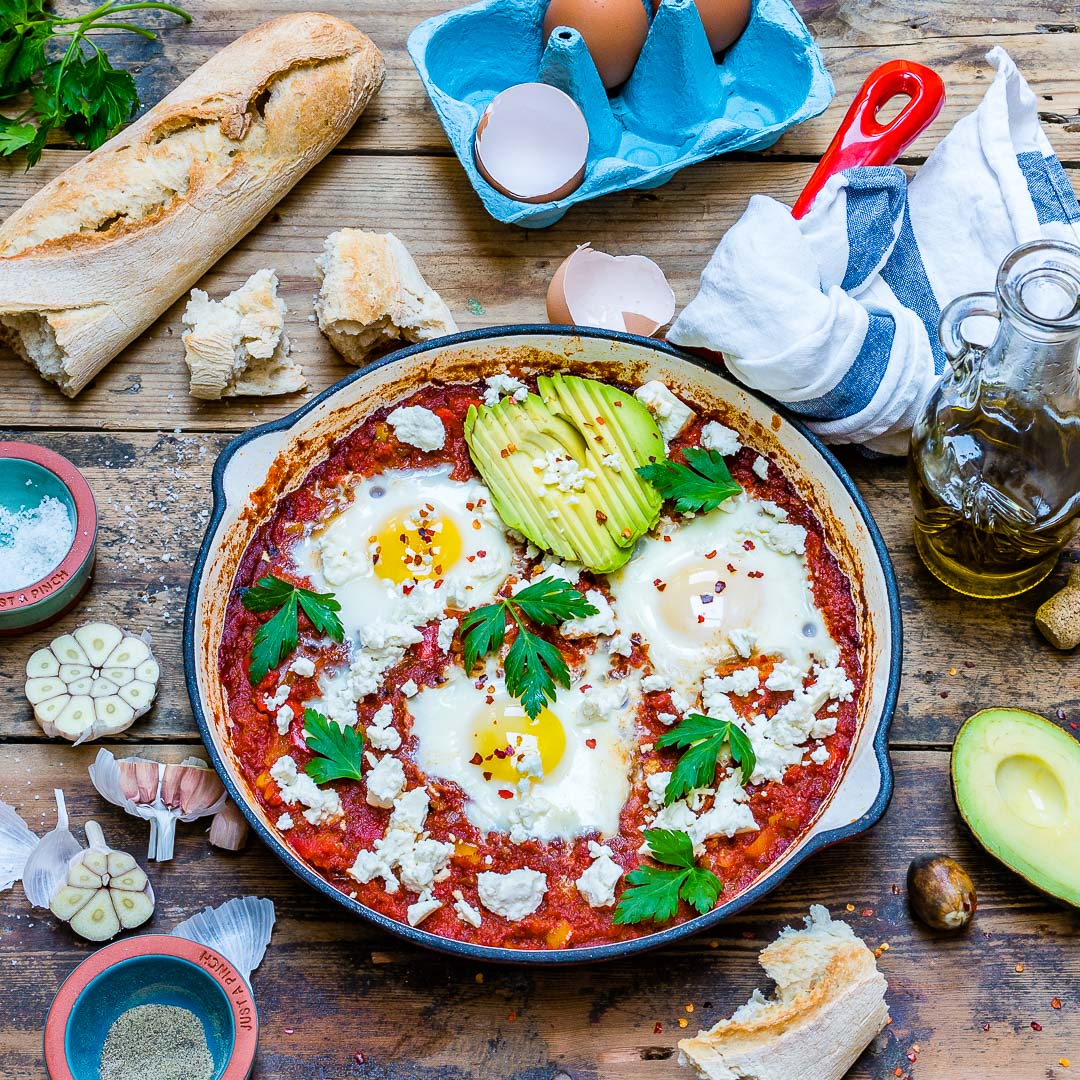 Today’s delish is one of the best Shakshuka recipes around. And I say this because it’s based on Ottolenghi’s recipe, the chef that made it famous.

I learned it when I worked in his Notting Hill restaurant a few years ago. I guess this is one of the perks of working in the best restaurants in London (there is also the employee discount 🙂 )

You get to learn from the best people in the industry.

This easy shakshuka is so popular that The Guardian even wrote an article about it. And here’s a fragment from it:

Now, I should point out that the one I made today is not entirely Ottolenghi’s shakshuka recipe.

I used his as the basis and I added it a few of my own touches (a blondie’s touch 🙂 ).
Hopefully, my ex-bosses will like it and I made them proud.

And it may seem like bragging but honestly, it came out crazy delish and the best part?
You can make this easy shakshuka recipe in under 25 minutes.

Another thing I should mention here is that shakshuka is also known as eggs in tomato sauce.

And as you probably know, there are hundreds of recipes for eggs in tomato sauce, but that doesn’t necessarily mean that they are all shakshukas.

The way it’s made and the ingredients will make the difference. 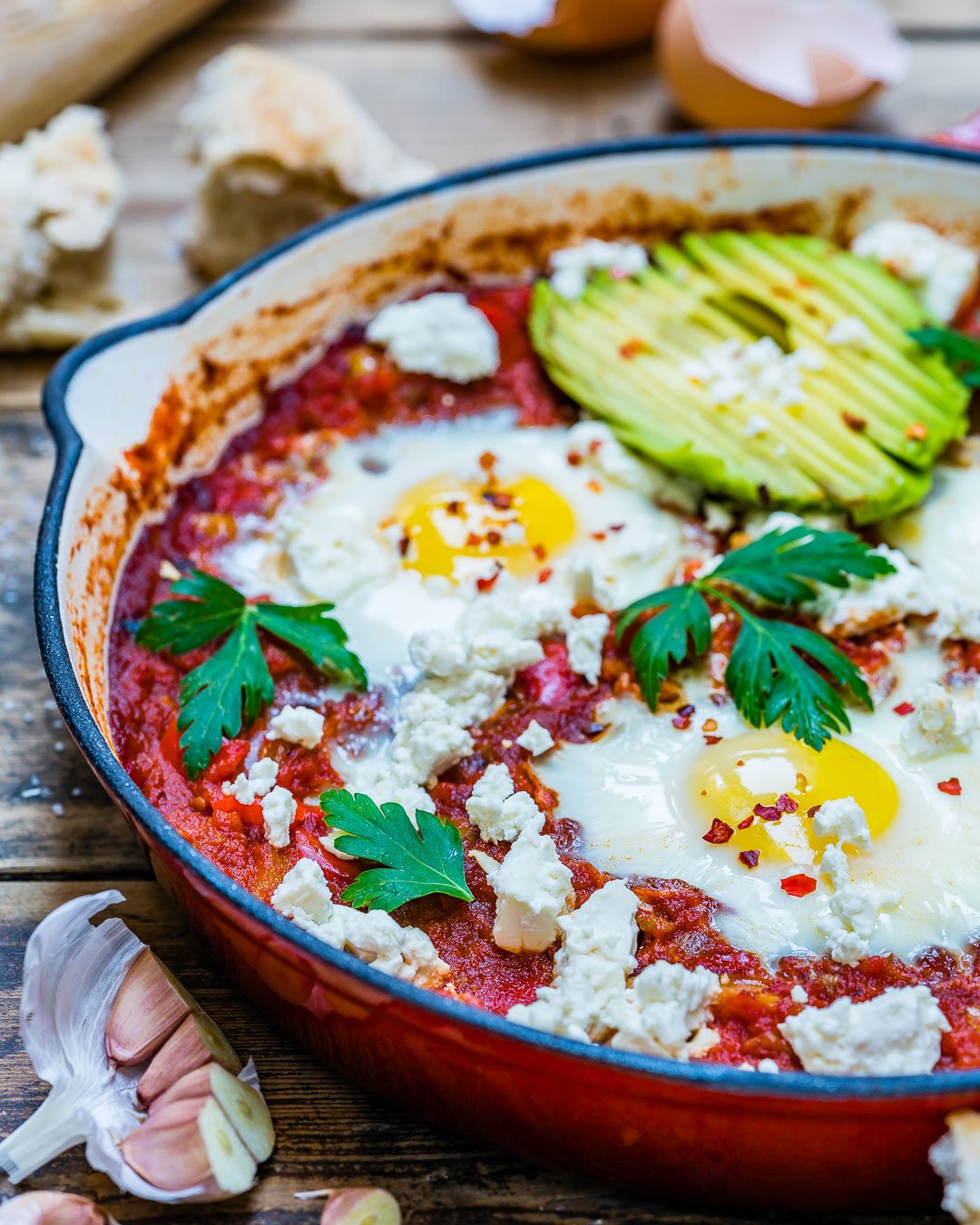 Right now you’re probably eager to make it and see it on your plate at once.
I know, I am too.

But first, I would like to explain in a few sentences what shakshuka is exactly as I know there are foodies out there who don’t know much about it.

So let’s start with the basics before firing up the ovens, ok? 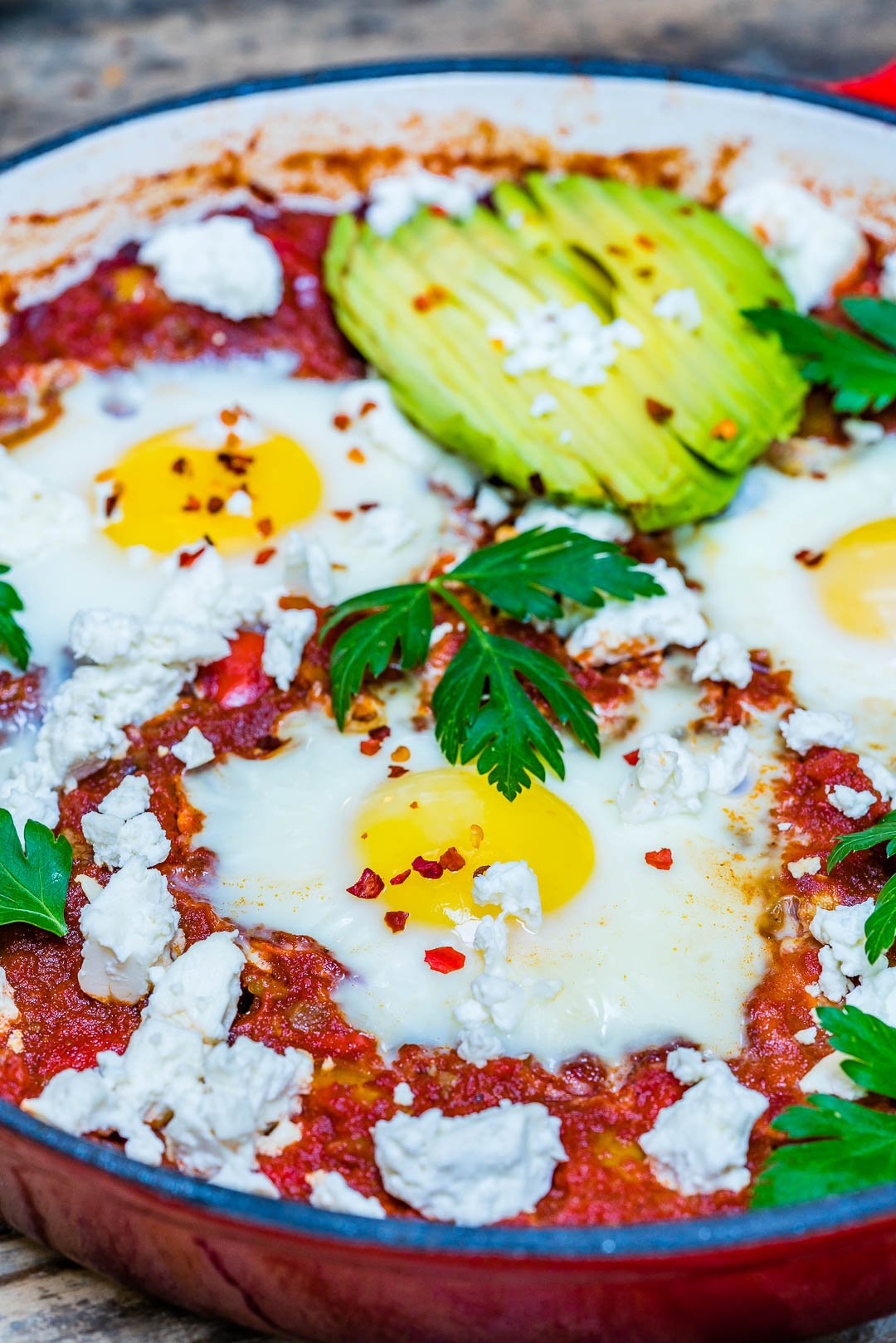 Shakshuka is a Middle-Eastern dish made of eggs poached in tomato sauce. It is a staple in both Arab and Israeli cuisine (Source: Wikipedia) and it is served for breakfast or lunch.

In Israel, they even serve it for dinner and it’s considered a national favorite along with hummus and falafel.

Shakshuka is usually cooked in a cast iron pan and served with crispy bread or pita (try soaking it in the sauce before serving, it’s crazy delish).

Tomatoes are one of the two basic ingredients. They make a mouth-watering sauce in which you add the second ingredient, poached eggs.

That’s why it’s also called eggs in tomato sauce. On them, you add cheese, herbs, and even meat, according to your taste.

Ok, now that you know what it is, it’s time to give you some tips on how to make it. 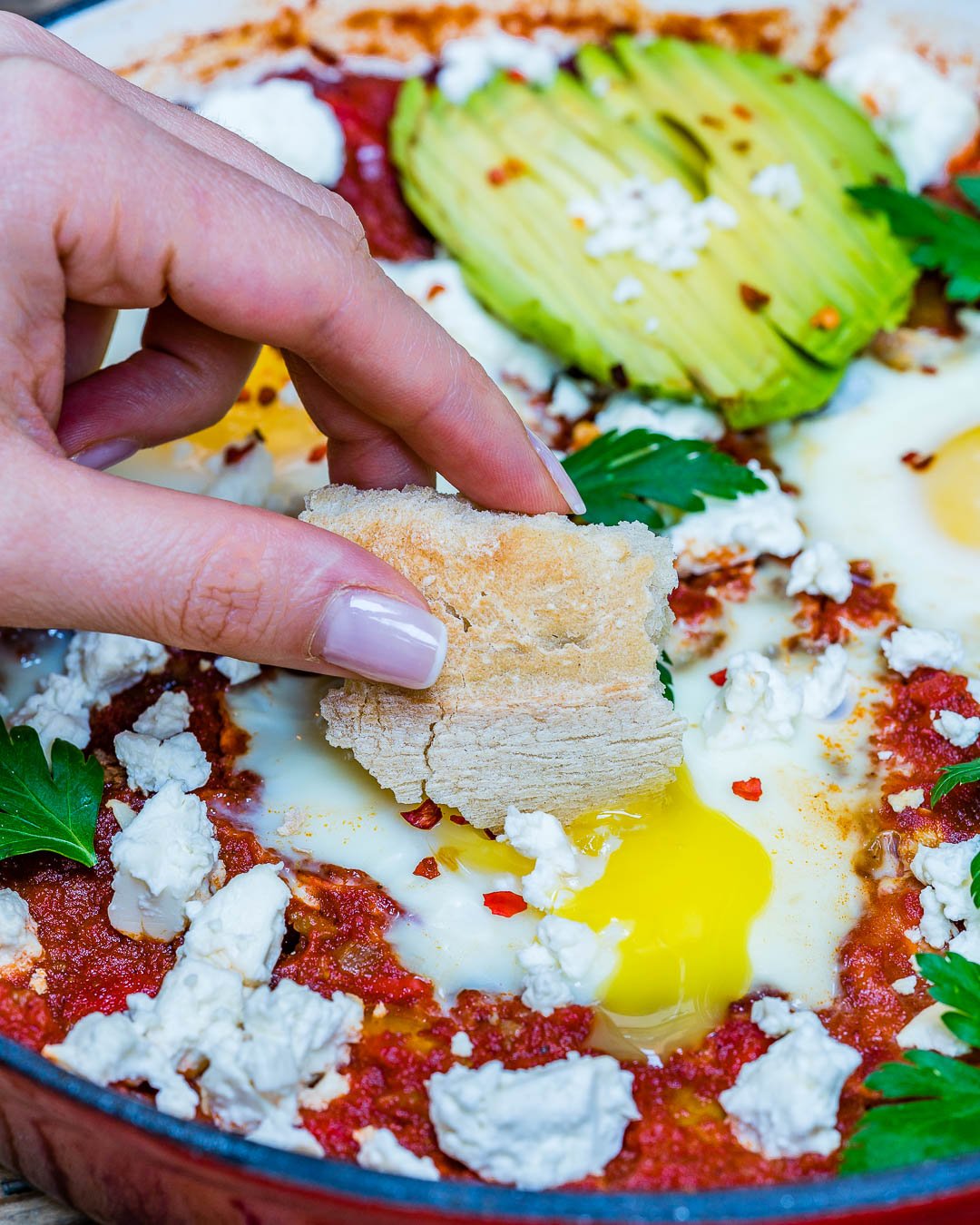 How to make Shakshuka a.k.a Eggs in Tomato sauce. Recipe with Tips & Tricks

Remember when I said that I took Ottolenghi’s shakshuka recipe and added my own touches?

Well, you can do the same thing with mine. You don’t have to make it exactly the same as I did.

As long as you respect the basics (eggs poached in tomato sauce), you can go crazy with the other ingredients and mix them up to your own taste.

Keep in mind that this is not just a popular Israeli dish.

Over time, it became a traditional egg dish in so many countries and they all influenced it in their own ways.

For example, in Spain, they make it with their traditional sausage, Chorizo.

What I am saying is that you can do the same, and add it your favorite ingredients, even the ones that are popular in your country (or region). 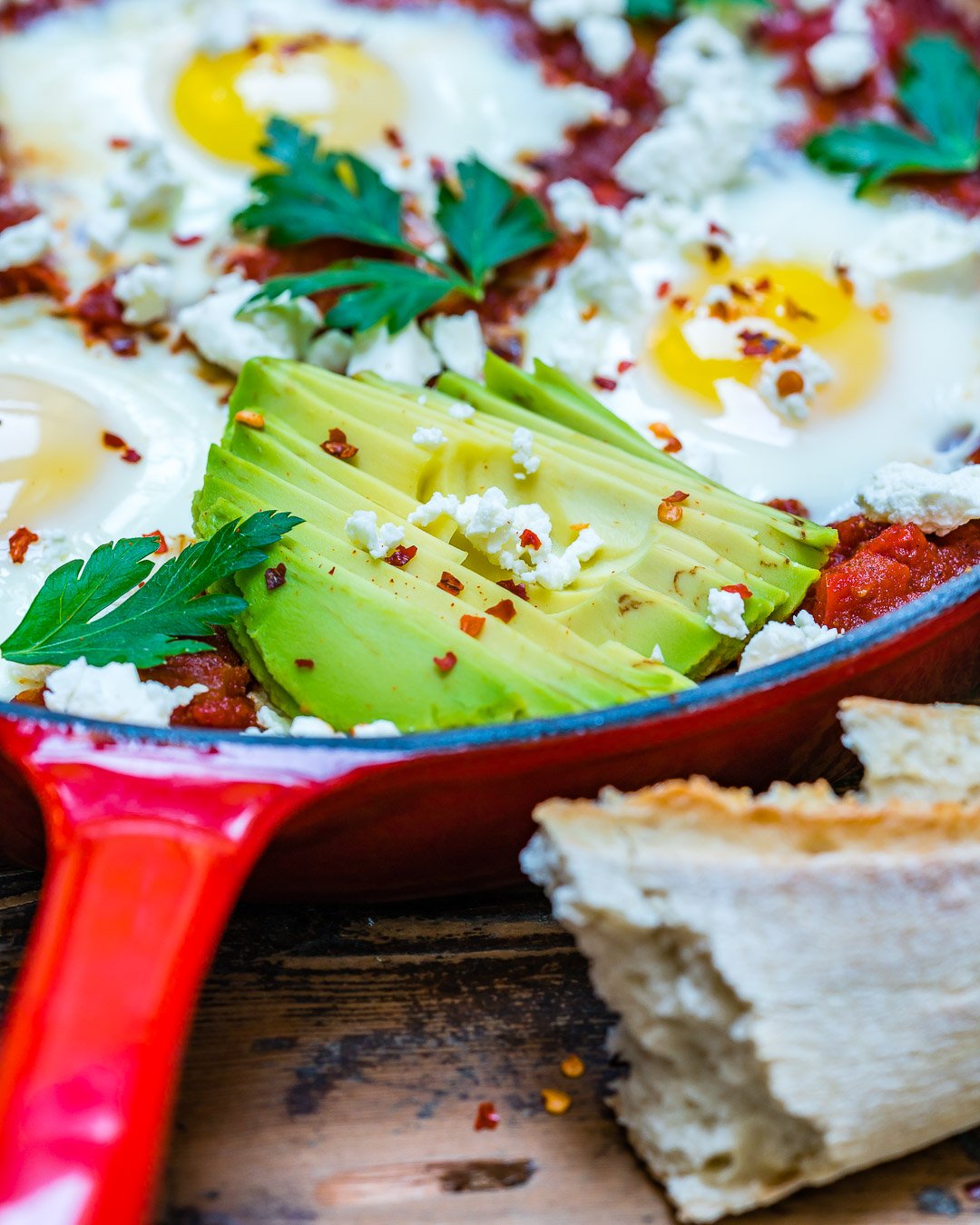 In fact, some of the tips and tricks below will give you some idea of how you could mix the ingredients.

So check them out, make this easy shakshuka recipe and let me know how it comes out.

Also, let me know if you add any special ingredient to it. I am so curious to see how it might turn up. 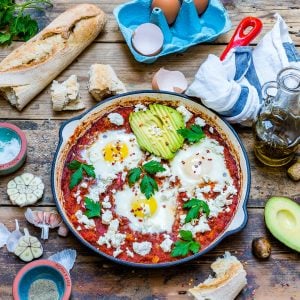