How to make the best Ratatouille recipe this fall? In a slow cooker, of course.

Looking for a healthy and delicious autumn recipe? How about some good old Ratatouille?

But there are so many versions today that it’s hard to know which one is the best ratatouille recipe, isn’t it?

Well, I always found it more interesting to mix the classic and the modern when it comes to cooking. That’s why I took a traditional ratatouille recipe and cooked it in a slow cooker (a.k.a Crock Pot). 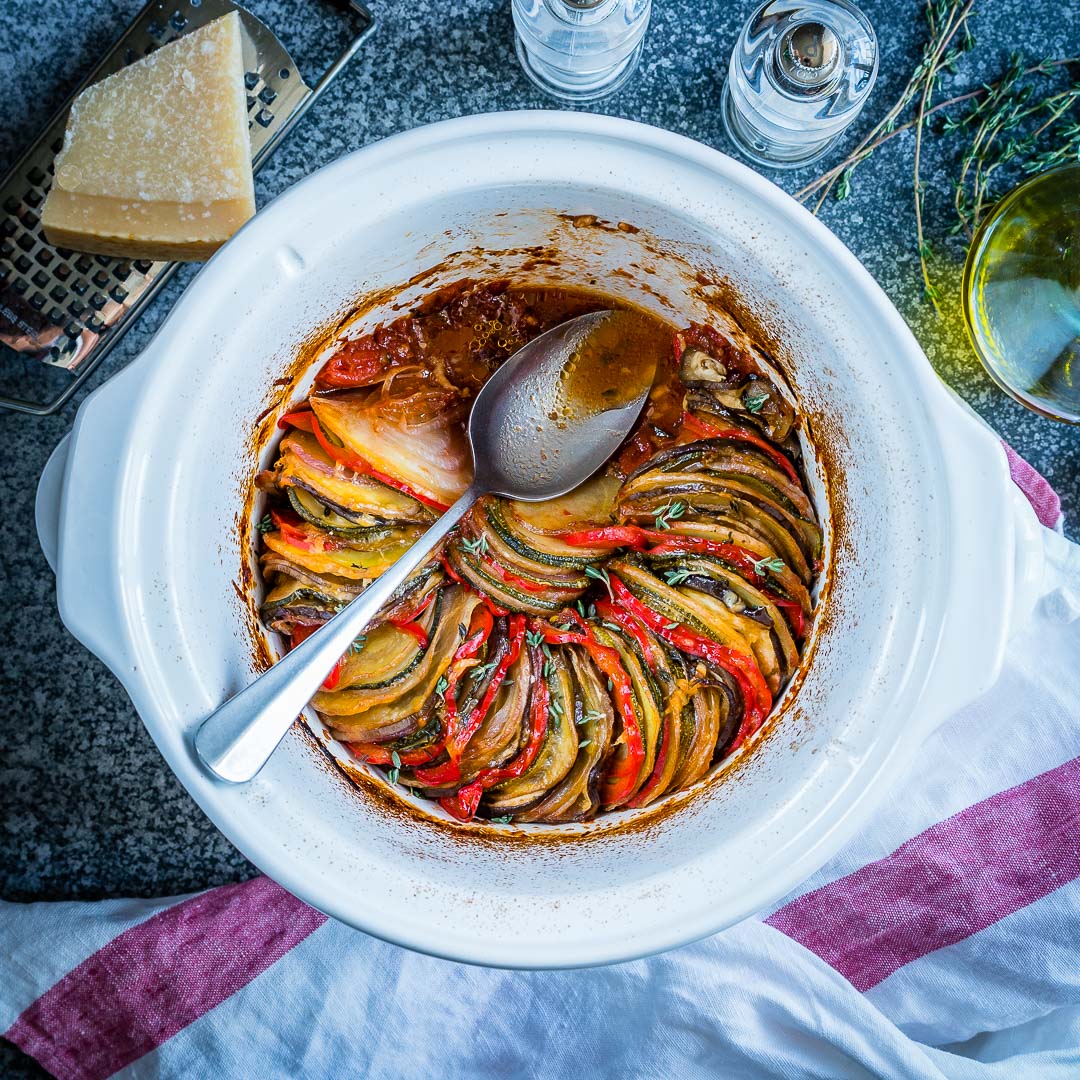 Making ratatouille in a slow cooker takes more time, but it’s really easy, because all you have to do is prep it, throw it in and leave it there until it’s done. There is no need to watch it or to adjust anything.

And because we are cooking the veggies at low temperature, they keep most of their nutrients and flavor, making them healthier and more delicious. 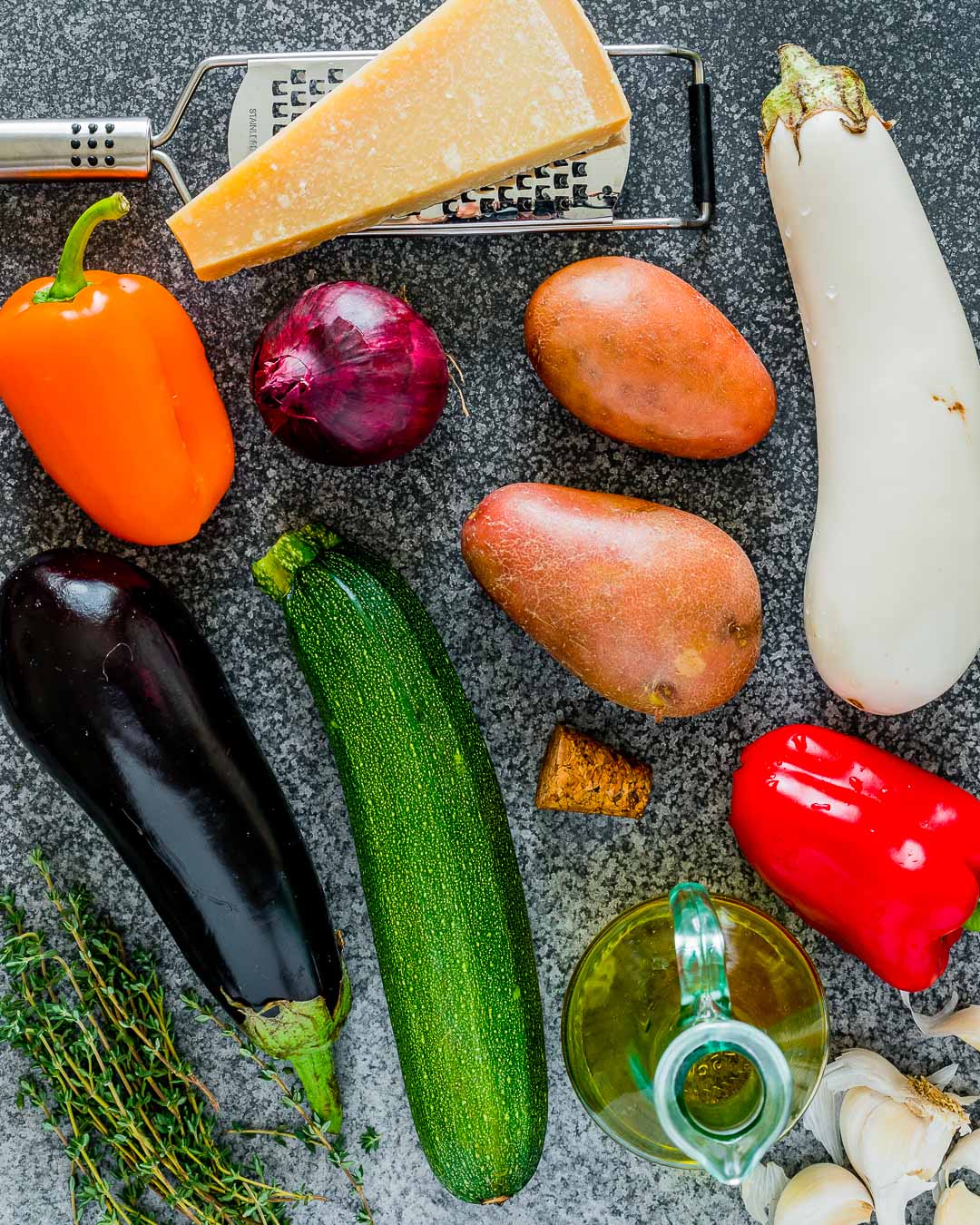 If you don’t have a slow cooker, you can find a decent priced one on Amazon, but you can also make this recipe in the oven, without a crock pot. I have included the instructions for doing that in the Recipe Notes below.

But before we rock the kitchen, I would like to tell you a few things about this dish. I have also included my best tips for making this easy slow cooker ratatouille recipe, so keep reading as it gets interesting.

Now, out of curiosity, how many of you know what ratatouille is?
Just to be clear, I am not talking about the movie, and the recipe was not named after it. 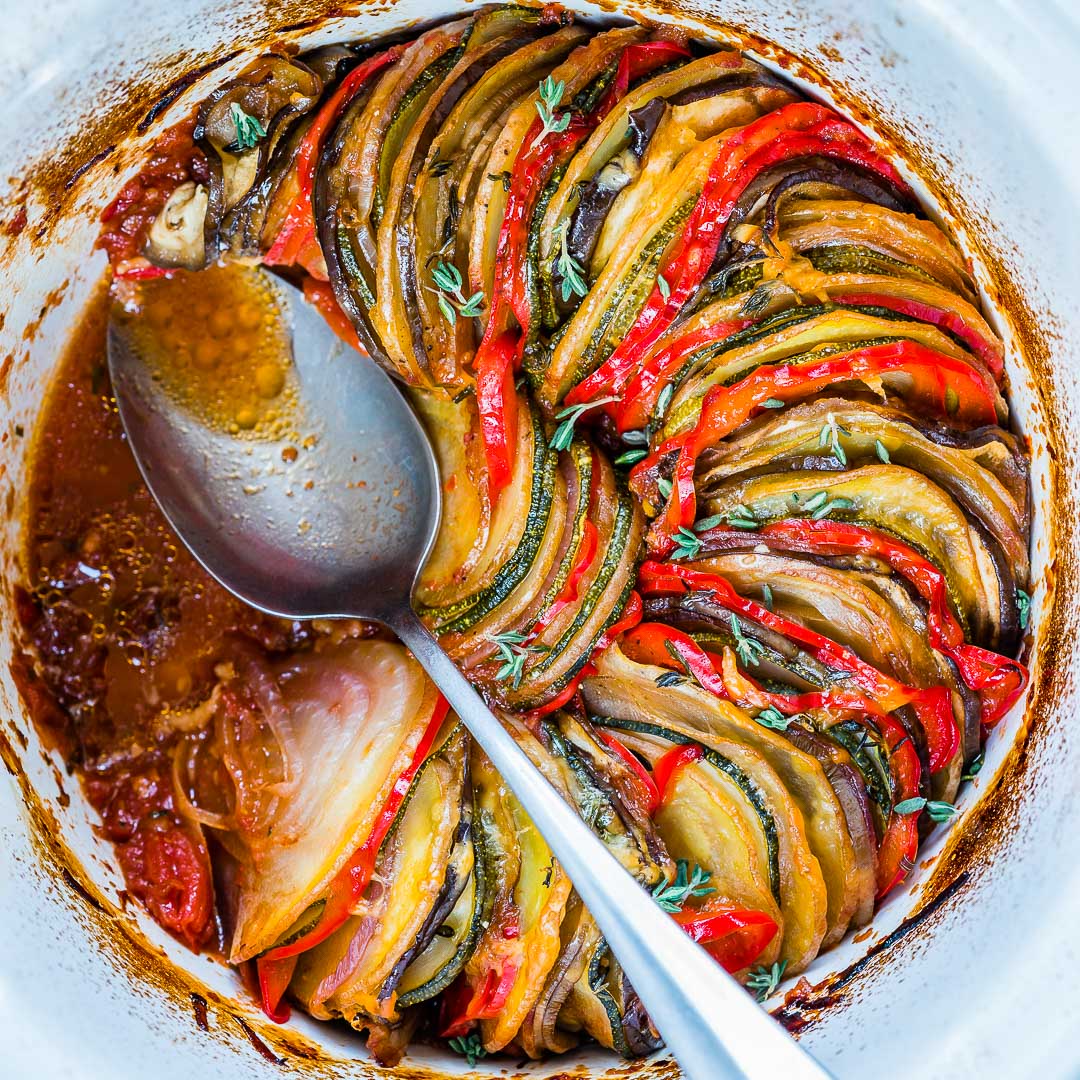 According to Wikipedia, Ratatouille is a stew made of veggies and it originates from south of France, more specifically Nice. Hence, it is sometimes called ratatouille niçoise.

In its old days, it was known as the poor man’s dish. Today, it became so popular around the world and although it is relatively cheap to make, it’s hardly for the poor.

But due to its current popularity, there are now so many versions of it. 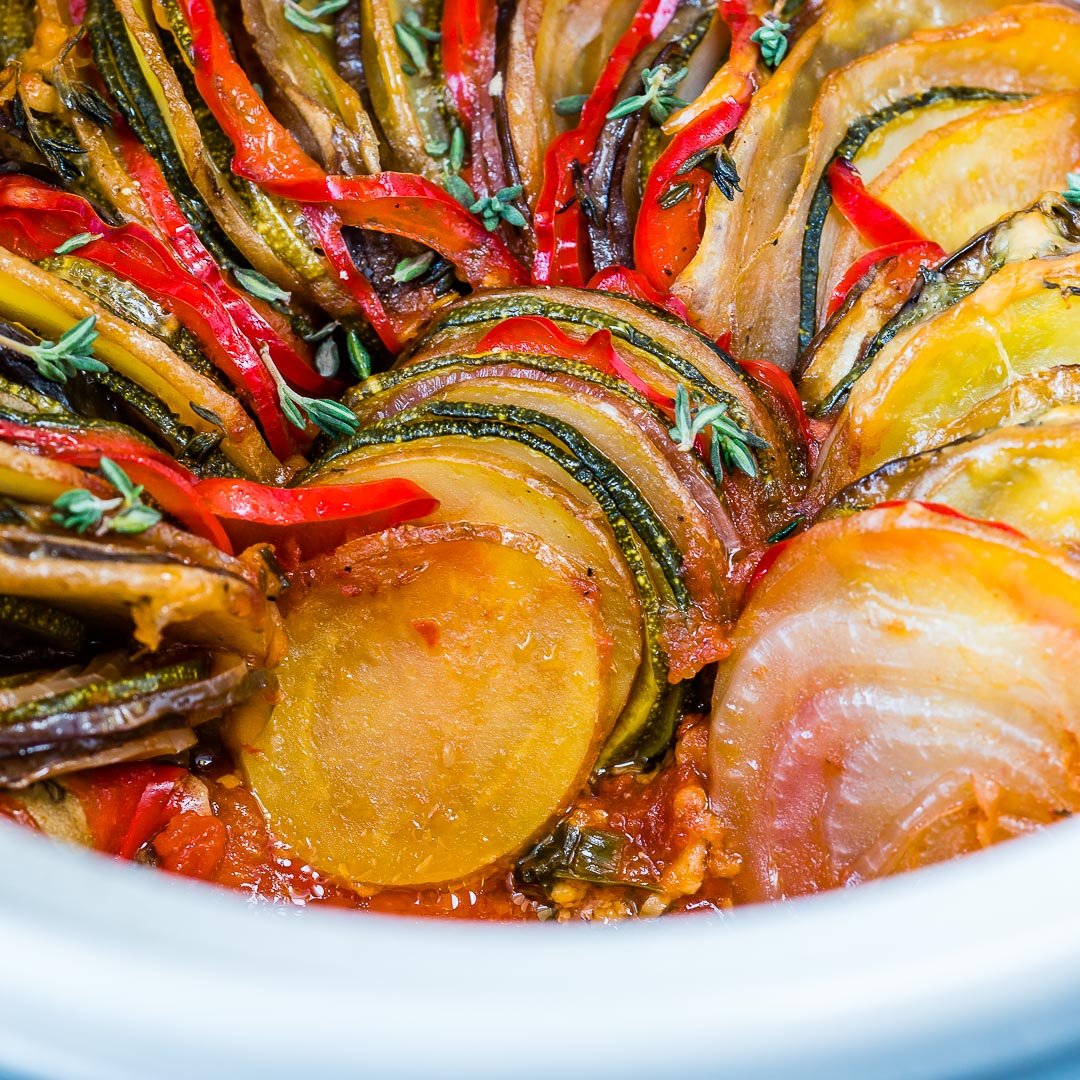 Now, as mentioned above, I like to mix the classic and the modern when cooking. So today I will show you how to make a traditional ratatouille recipe in a slow cooker.

You can serve it as an appetizer, main, or side dish.

If you’re a vegetarian it’s great as a main. But since most foodies love it as a side dish, I will give you a few ideas on what to serve with ratatouille.

What To Serve With Ratatouille 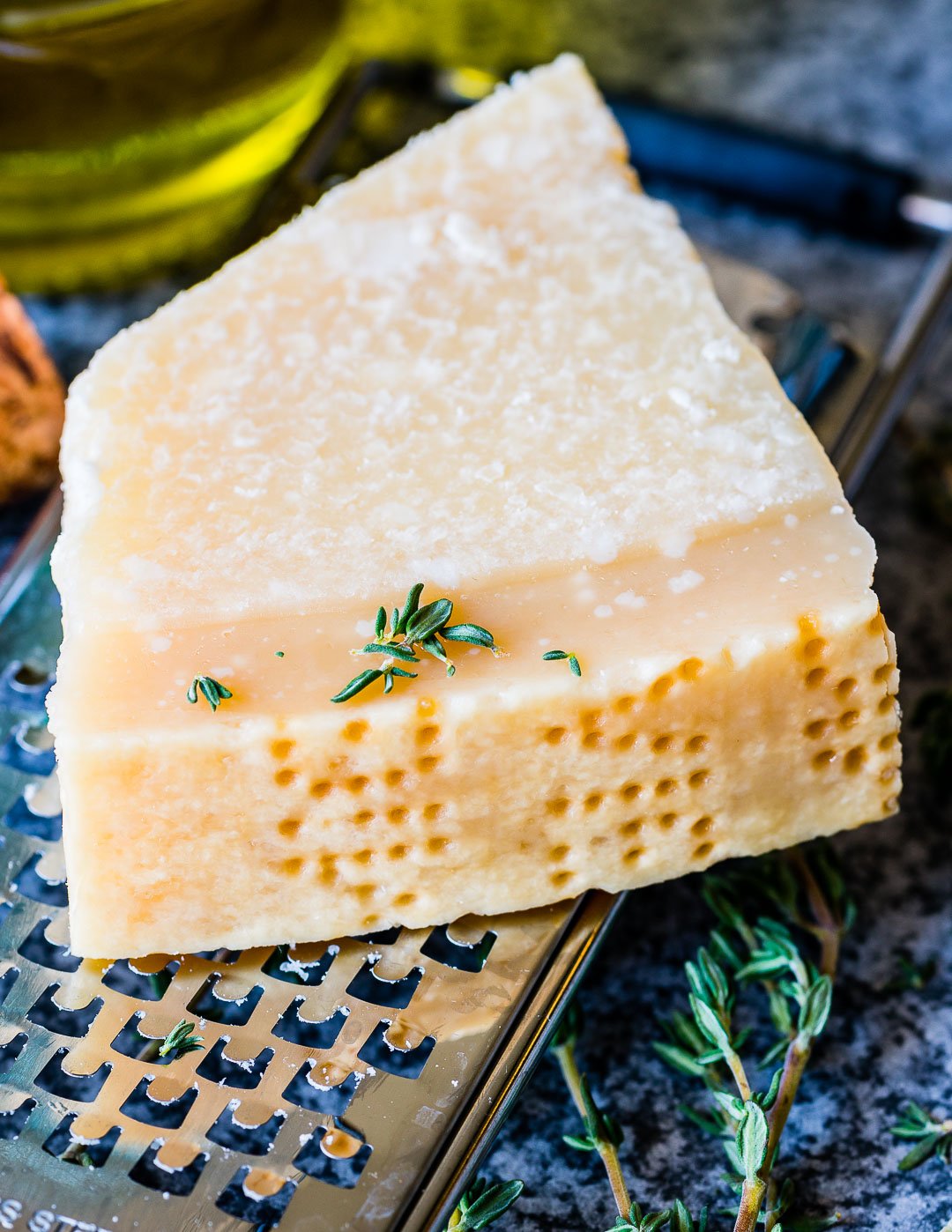 The answer to this would be quite broad because it goes perfectly with a lot of dishes. But I will narrow it down to my favorites, as I think you will love them too: 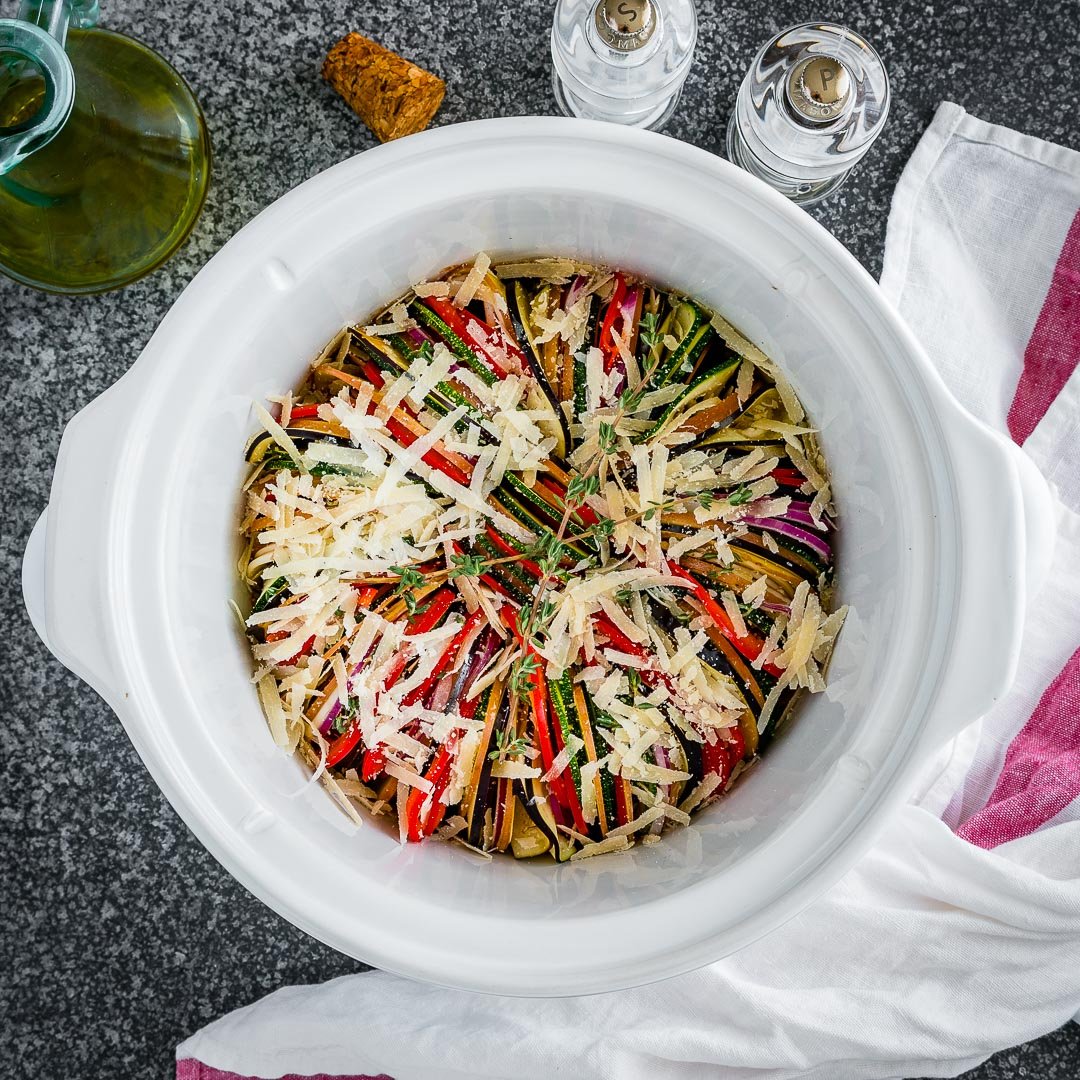 Now that you know what to serve with ratatouille, I will also give you a few tips about cooking it:

Now you know what ratatouille is, what to serve with it, and the best tips for cooking it. So let’s rock the kitchen, shall we?

Watch the video and see how to make Ratatouille in a slow cooker, and don’t forget to Subscribe to my Youtube Channel for more recipe videos.

How To Make Ratatouille In A Slow Cooker 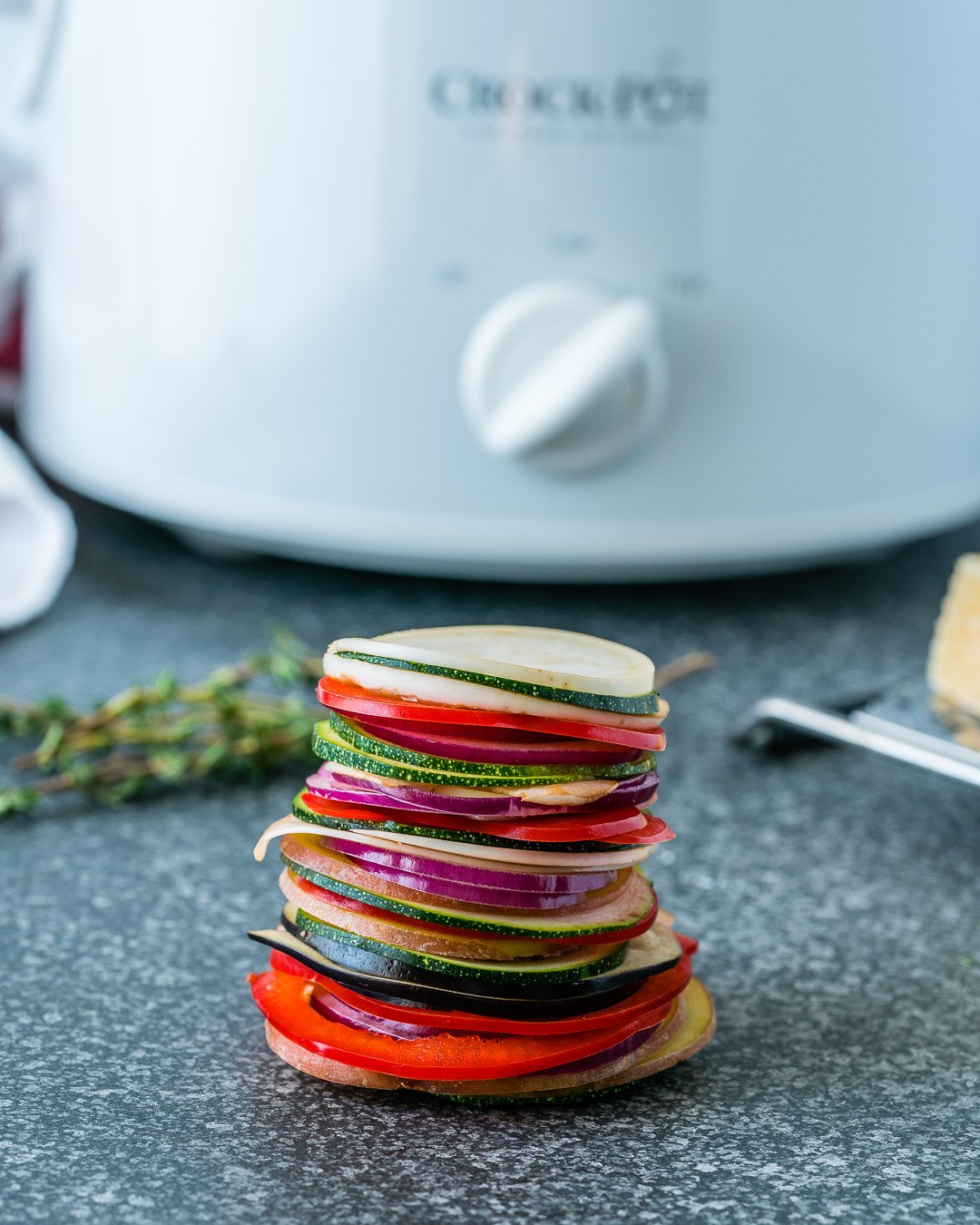 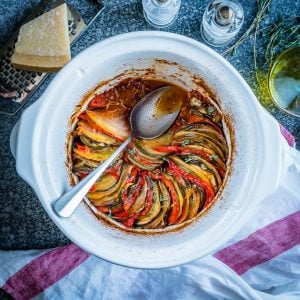 You can also make this recipe in the oven. Replace the slow cooker with a round oven-proof dish or a cast iron pan and cook it in the oven for about 1.5 hours, at 350F/180C. The ingredients remain the same.