Blondelish.com›Travel›4 beautiful places to visit in Transylvania – Traveling in the land of Dracula 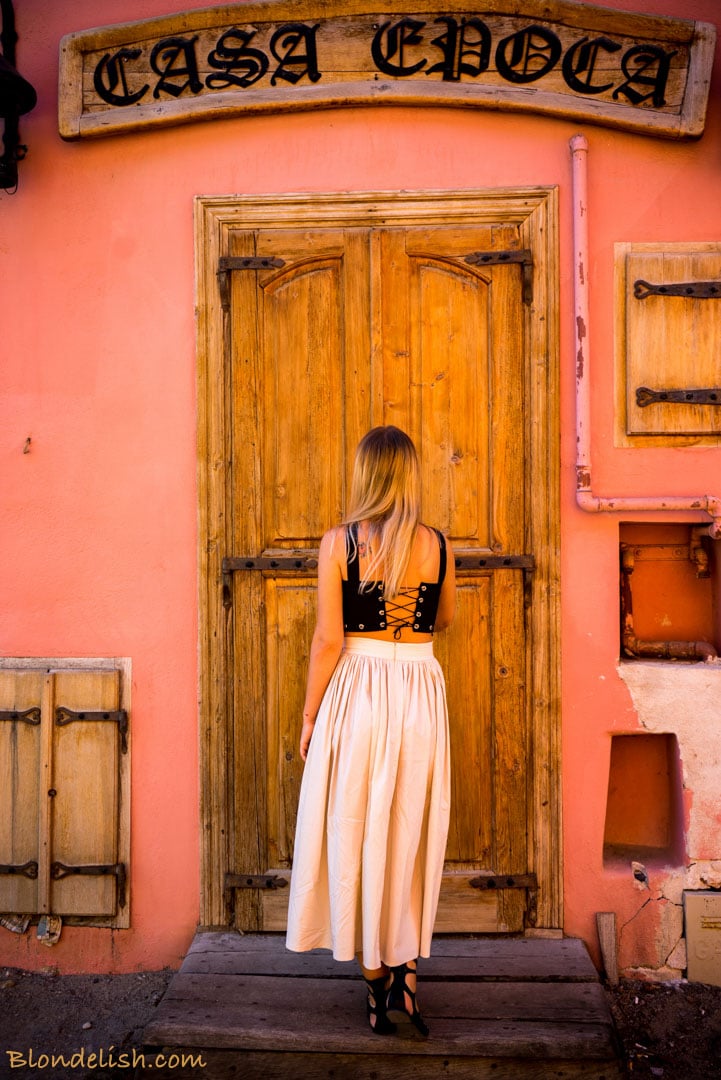 About a month ago, I decided to quit my job at Zuma and do a bit of traveling. I started with the beautiful beaches in Ibiza and then I headed back to my home country, Romania. I wanted to see something new, something that would impress me, so I started asking friends for suggestions.

Most of them told me about places I had already seen, so none aroused my interest. But one came with the brilliant idea to travel to Transylvania and visit Sighisoara, the place where Dracula was born. He also told me that I should try to find accommodation in the old village of Miclosoara, at Count Kalnoky’s Guesthouses.

And then he came up with another suggestion that sounded really interesting. He told me to visit Viscri, an old remote Saxon village, where the Prince of Wales recently bought a house and made it his summer retreat. I remembered reading in the local media a few years ago, that he and Prince Harry went there for a short summer holiday, so I asked myself “Why in the world would these guys spend a holiday in an old Romanian village??? when they could easily spend it on a yacht in Bora Bora next to Kim Kardashian and Kanye West 🙂 ”

So I decided to go and see for myself what exactly made this village famous within the royalties. I called and made a booking at Count Kalnoky’s Guesthouse and early next morning I was road-tripping to Transylvania in search for remote villages and Dracula’s birthplace… woo, that sounds a bit creepy. I probably should’ve taken a silver dagger with me, just in case I run into a vampire 🙂

In the search for Dracula, I passed through Brasov, a beautiful Transylvanian city. And since you can’t chase vampires on an empty stomach, I decided to make it the first stop on my list.

Hidden between the mountains, the city boasts some impressive medieval Saxon walls, colorful buildings and a cobbled old town which is home to hundreds of cafes, restaurants, and pubs.

As I was strolling through the cobbled streets of the old town I found a small restaurant with a lovely terrace called La Ceaun. This restaurant served Romanian traditional food made after their local recipes. Most restaurants in that area serve traditional dishes but this one got to me because there was a lot of people waiting in the queue for a table. I thought that if all those people were willing to wait in line to eat there, it’s definitely worth a try.

After about 20 minutes my table was ready and this is what I ordered: 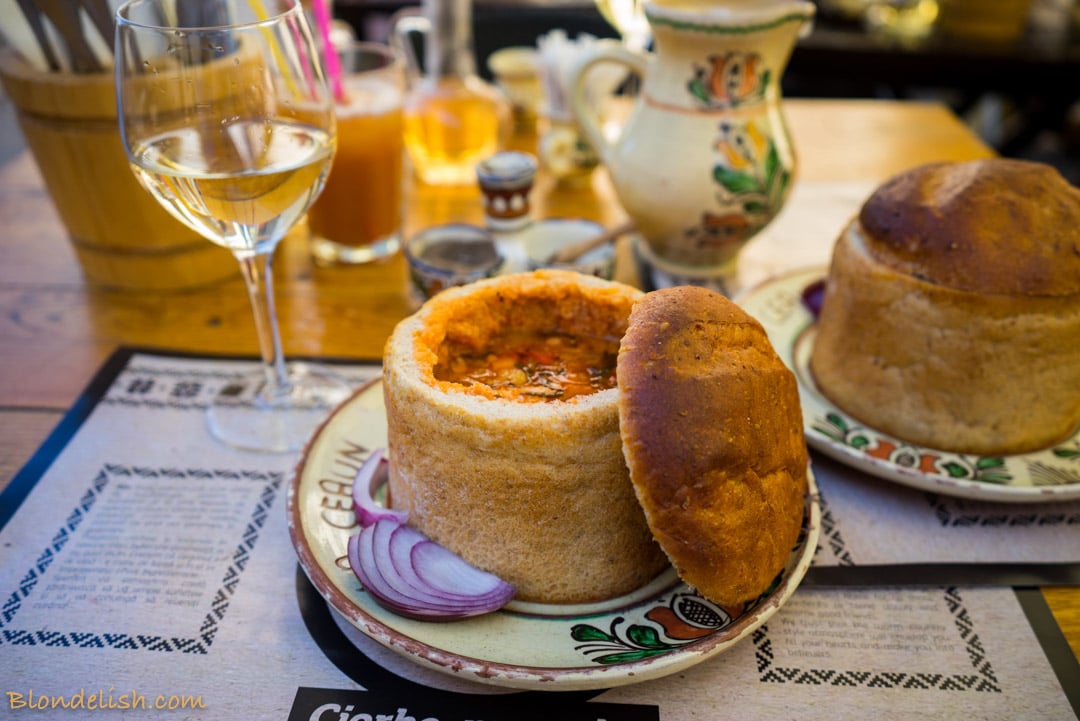 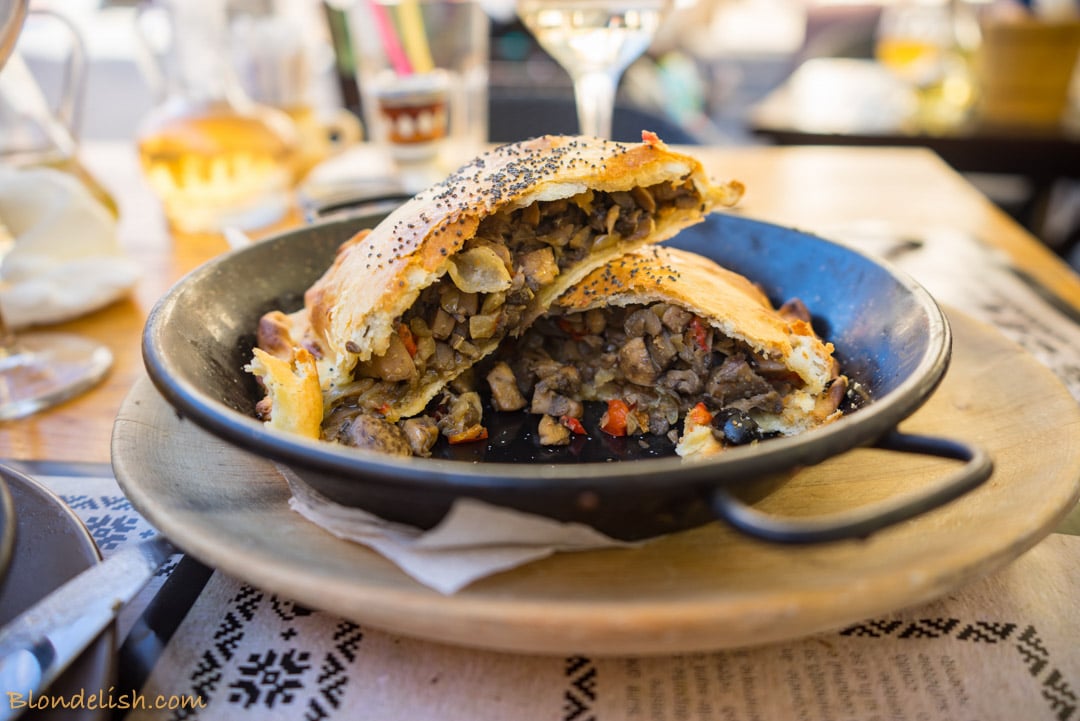 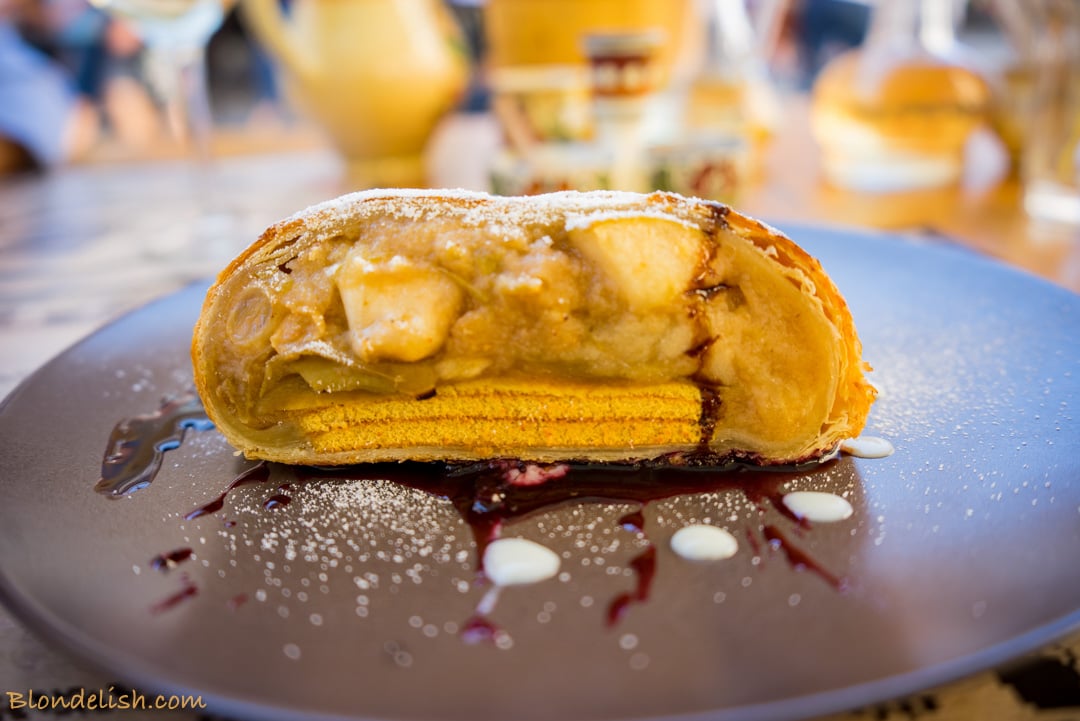 When I saw the dishes I said: “It was totally worth the wait”. In the first photo there’s a Romanian traditional beans and smoked pork soup, served in…. bread. Yea, quite an original plating isn’t it? And it was that good, that I literally ate the plate 🙂

The second one is a mushroom tart and the third is a delicious apple strudel. This restaurant is surely my top recommendation if you ever travel to Brasov.

The main attractions are: Brasov’s Citadel Fortress, Tampa (a small mountain near the city center that offers breath-taking views), Poiana Brasov (a ski resort for the mountain lovers) and Rasnov Fortress, which is in the nearby town of Rasnov.

There’s a number of things to do here, especially in the surrounding area. However, I was short on time so I had to resume my road trip. But for those of you who wish to visit Brasov for longer than a few hours, I would suggest you try the Bran Castle (a.k.a Dracula’s Castle). 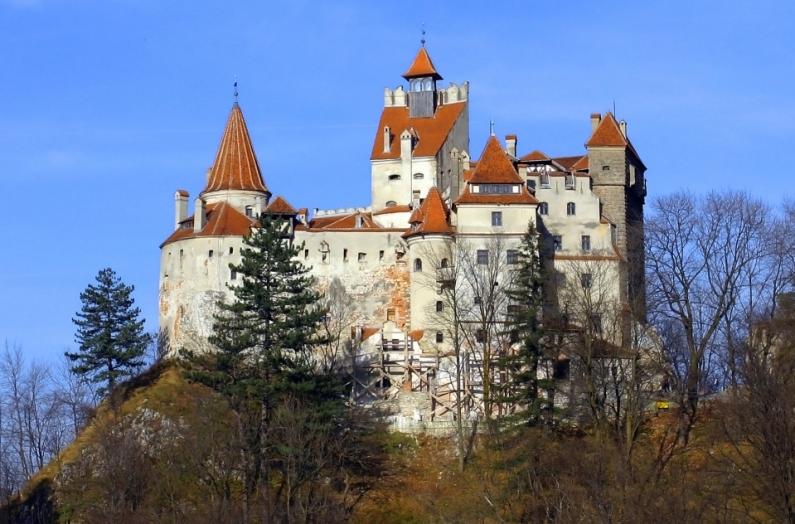 Back on the road, I was heading deeper in Transylvania towards Count Kalnoky’s Guesthouses. After about an hour away from Brasov, I got to the village of Miclosoara.

At first sight, the houses in that village didn’t seem much, a lot of them being pretty old. I wanted to call my friend who suggested it to me and ask him whether he played a trick and sent me to some sort of old farm. But after passing through the gates of the estate I realized that he didn’t play any tricks.

There were a few old houses restored to their original condition and right after I entered the reception area, the quality of the restoration struck me. It wasn’t the type of old, damaged and dusty that I thought it would be when I saw the first houses in the village.

It was a quality antique restoration which required careful attention to detail and even though everything was old, it was in very good condition. Wooden beams, a beautifully decorated fireplace, the old furniture, they all created a relaxing environment meant to take you back in time. It was like a peaceful and relaxing encounter with the old Romanian way of life. 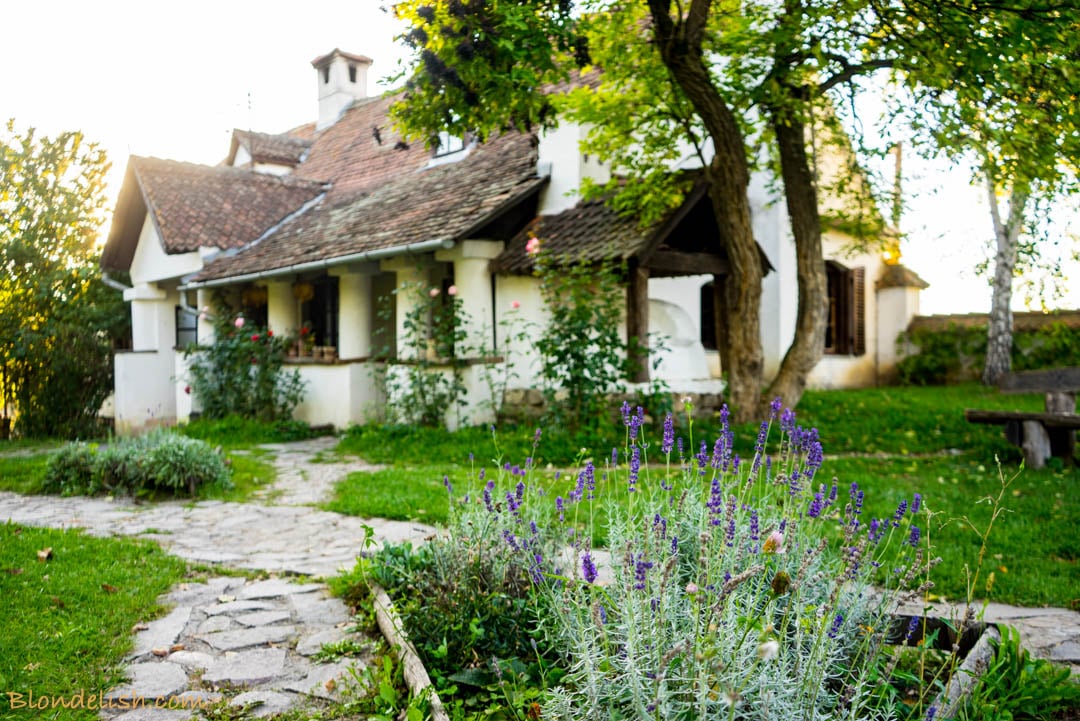 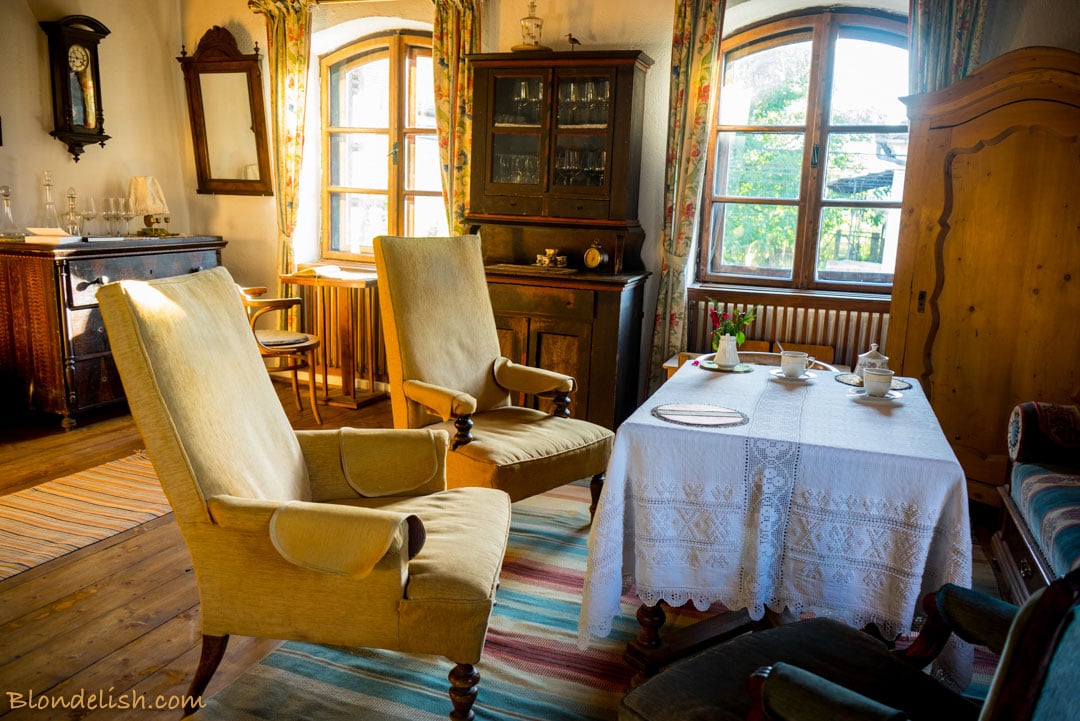 After enjoying the surrounding nature and shot tons of photos, we went for dinner in the house’s cellar. This was an old cellar made of stones and wooden beams. All guests sat together at a large table so we could interact better and make new friends. We served tasty traditional food and an excellent wine that made everybody chatty and eager to share stories.

Early next morning we checked out, said goodbye to our new friends and traveled to the second destination on our list: 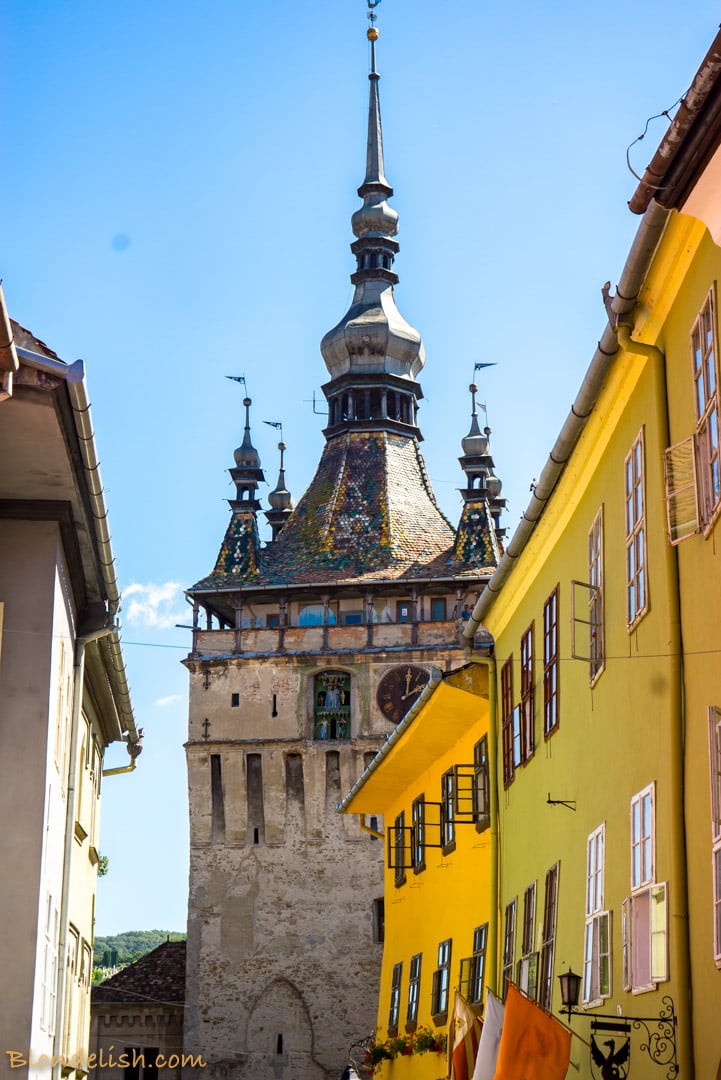 Although I heard a lot about it, it was my first time in this small fortified city. Built by the Saxons in the 12th century, it features a network of charming cobbled alleys, a well-preserved medieval tower with stunning views, and loads of restaurants and cafes hidden within the colorful buildings.

The best time to visit Sighisoara is on the last weekend of July during the Medieval Festival. That’s when lots of people gather to enjoy live music, street theater plays, and the town’s best pubs and nightlife. The House of Dracula, The Venetian House and the Church on the Hill are some of the main attractions.

Here are a few photos of where Dracula spent his childhood. Judging by the way this fortress looks I would say he’s had it good. I wonder what made him so bloody? 🙂 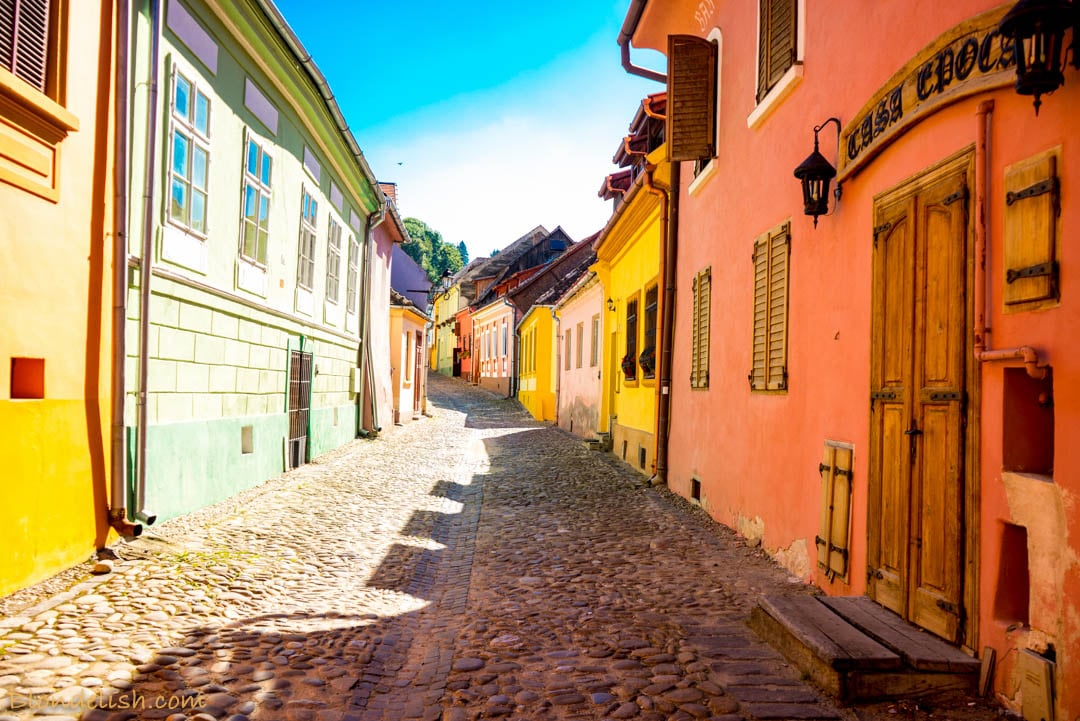 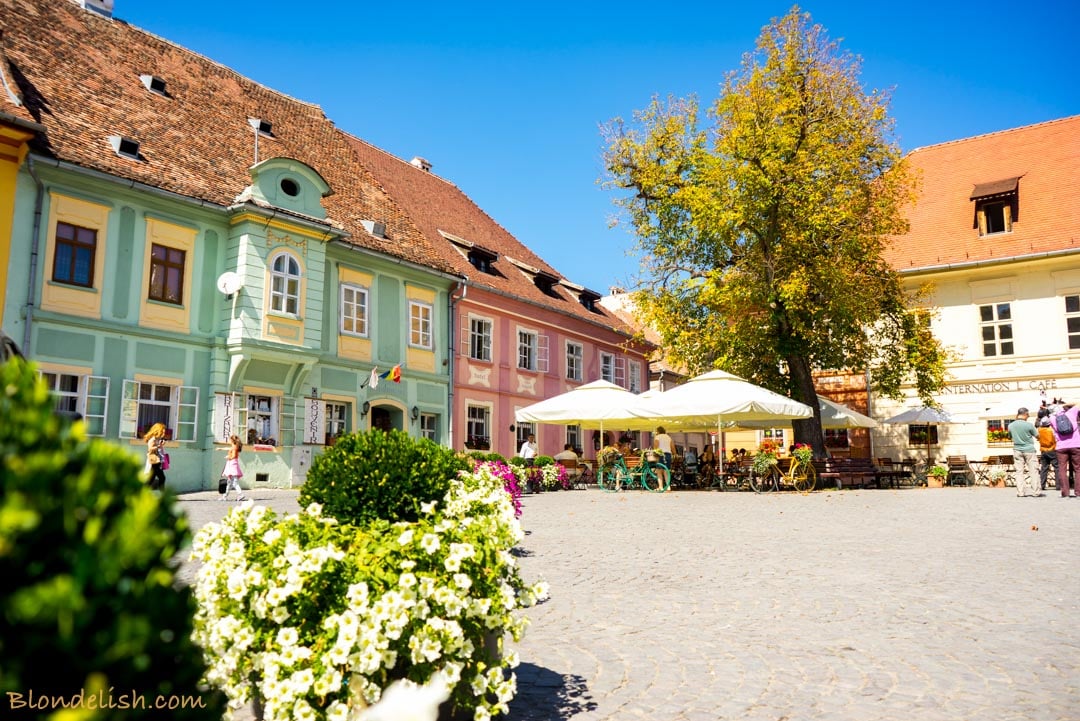 I wandered through the cobbled alleys, climbed the steep stairway to the Church on the Hill, went up in the Clock Tower and guess what? … No signs of vampires.  Therefore, I decided to abandon my vampire search and move on to the third destination in my travel list. 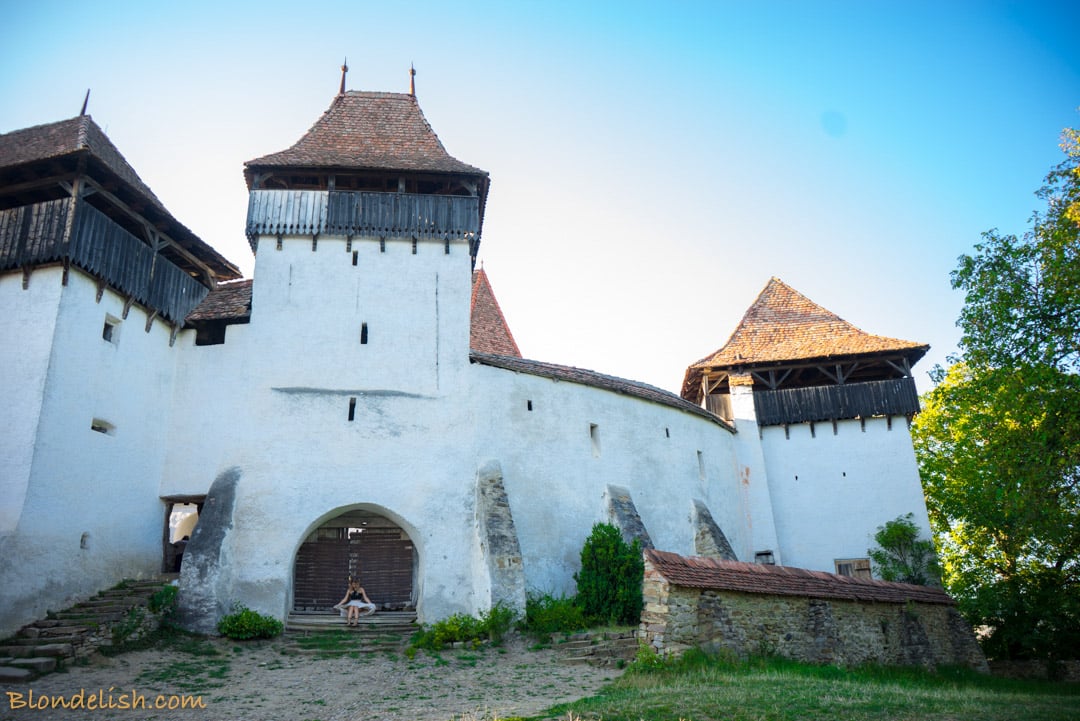 Now, I have to say Viscri wasn’t easy to find. Google didn’t show it on its maps and there were just a few unnoticeable signs. I had to get old school and just ask the locals for directions 🙂
This village is quite remote, so while I was trying to find the way towards it, I kept asking myself: How on Earth did Prince Charles find this Godforsaken village?

But as we approached it, I began to understand what probably made him come in here. It was the unspoiled beauty of the place, the landscape, the colourful well-preserved Saxon houses. But most of all, I think it was the authenticity of the place that probably got him here.

The main attraction in Viscri is a fortified church, built around 1100 AD. Locals used it as shelter locals during sieges and attacks. It’s amazing how well-preserved is this fortress, considering that it’s a thousand years old.

The museum in the church offers an insight of the old Saxon way of life. 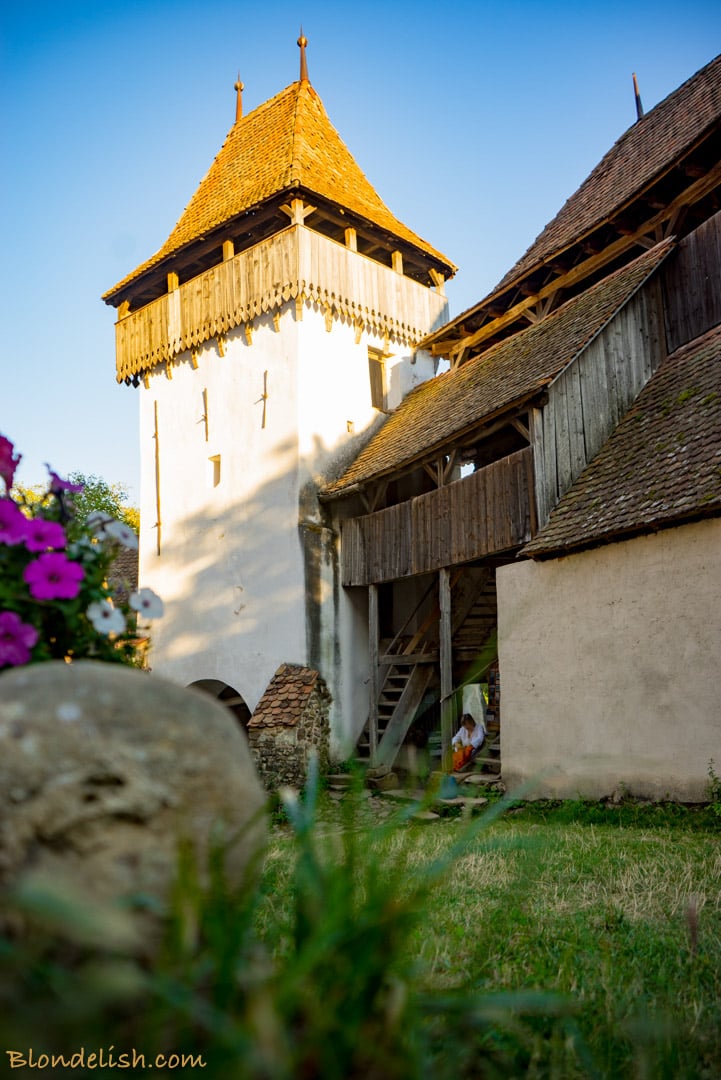 The church’s tower offers a breath-taking view over the hills that surround the village. 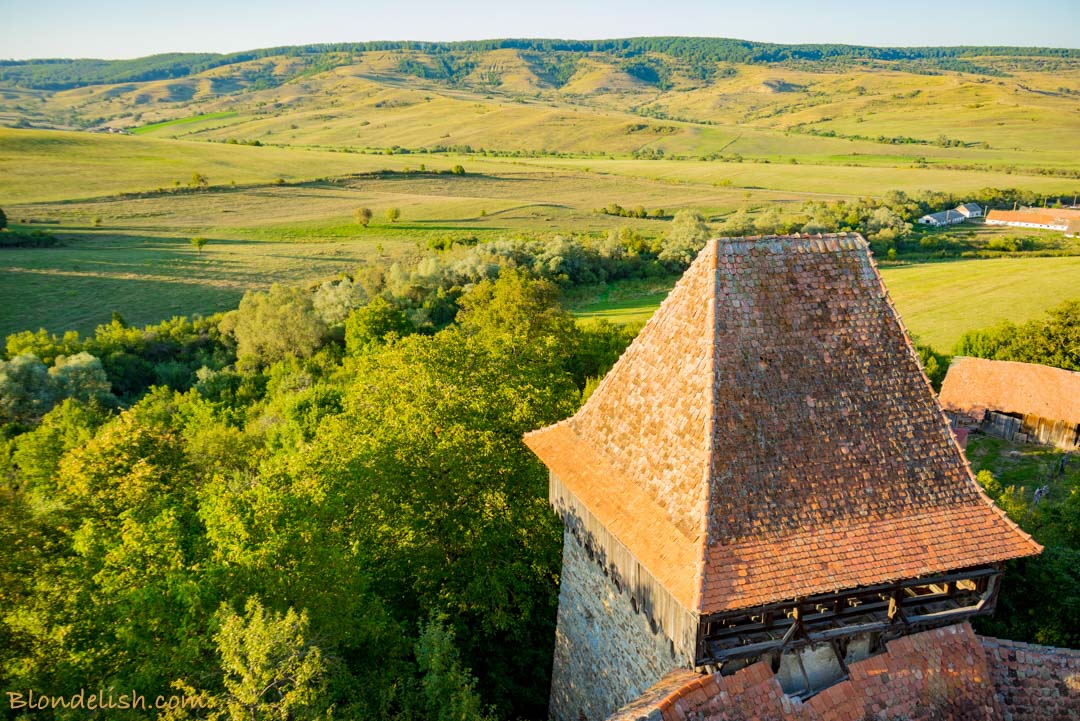 Local craftswomen and their children sell handmade garments and pottery 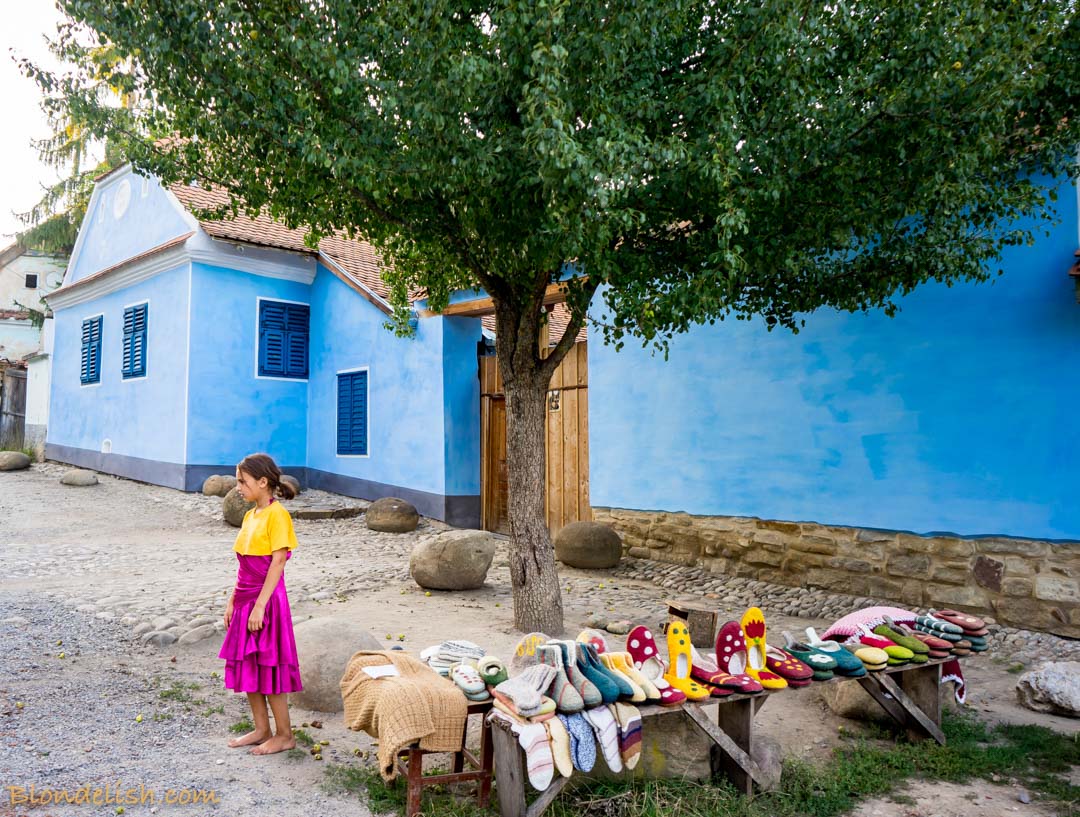 I ended my road trip with a traditional meal at a local guesthouse. As expected, food was great, the hosts were very nice and their colorful Saxon style house was a great subject for a quick photo shoot.

So I guess it was the uniqueness and peacefulness of this village that made the Prince of Wales come on holiday in Transylvania. Although it’s not the Austrian or Swiss mountain resorts, Viscri is a hidden gem, rich in unspoiled beauties, where time stood still. This place is waiting to take us back in its own time and certainly not for us to take it into our times.

Finally, the last place on my list wasn’t part of this journey. It was a separate one which I took to increase my collection of food photography props

4. Sibiu and the Potter’s Trade Fair 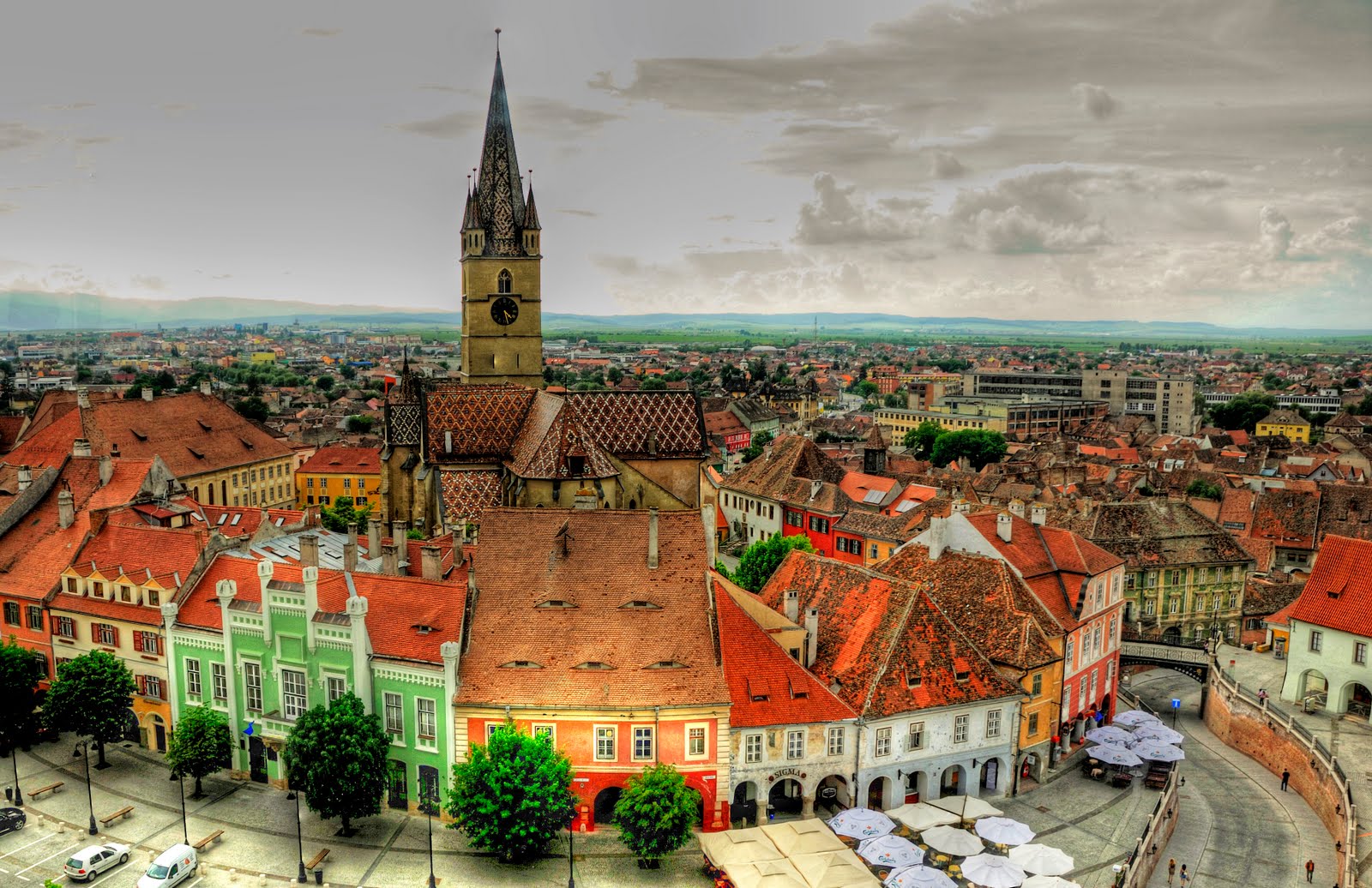 Sibiu and its surroundings are some of the most visited places in Transylvania. It’s close to the Carpathian mountains, so it features a few nice ski resorts as well. It was ranked as “Europe’s 8th most idyllic place to live” by Forbes in 2008.

The Center of Sibiu looks a bit like the one in Brasov, having a lot of Saxon influences. The area boasts hundreds of restaurants and cafes. If you get there, you should definitely try the octopus at Jules Bistro. 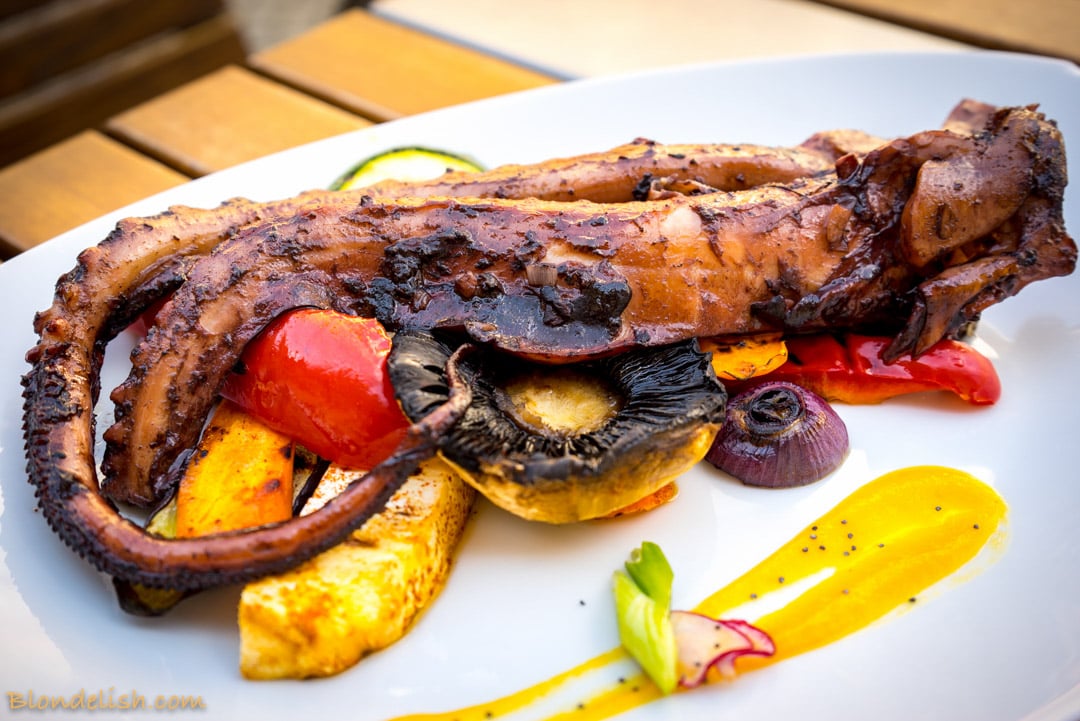 For those of you who would like to visit Sibiu, here is a list with the top 10 attractions here.
But for the moment, I was mainly interested in its Potter’s Trade Fair, Transylvania ’s oldest event of this kind.
With 50 years of existence, the fair gathers Romania’s most skilled craftsmen and offers a wide range of handmade pottery. It takes place every year on the last weekend of August.

As a food stylist, I am crazy about this stuff. I collect as many as I can, from all my holidays. Not only they are beautiful souvenirs but they also make great props for my food photography.
But a picture is worth a thousand words, right? So I’ll pack a few thousand words in these photos and let them describe Sibiu better than me. 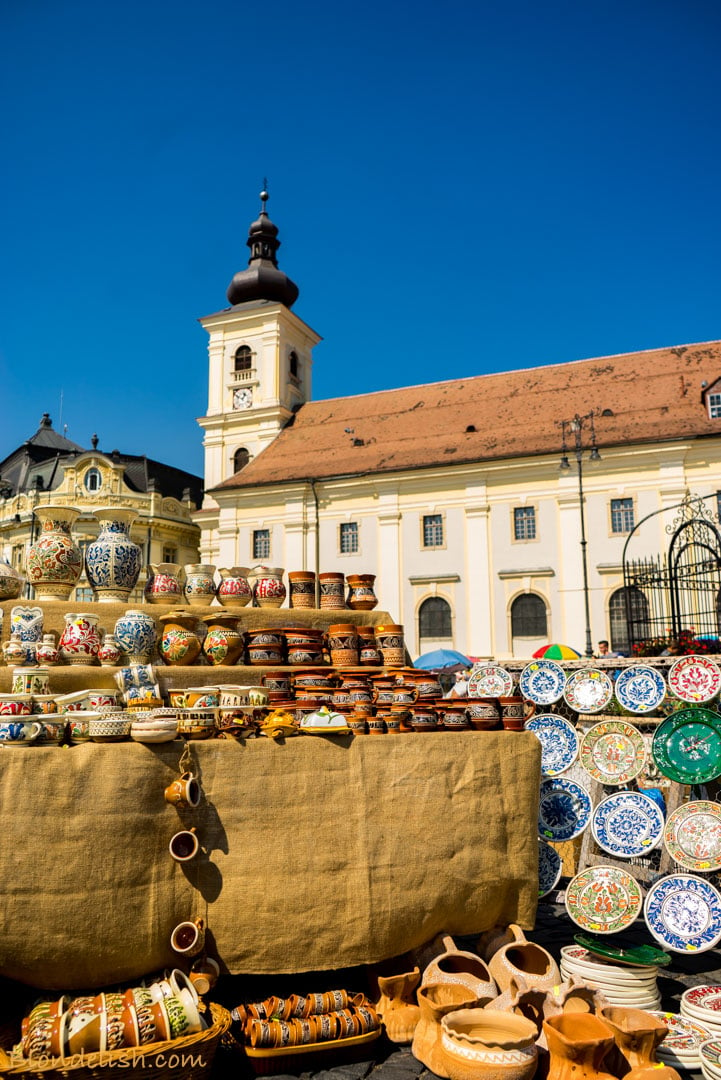 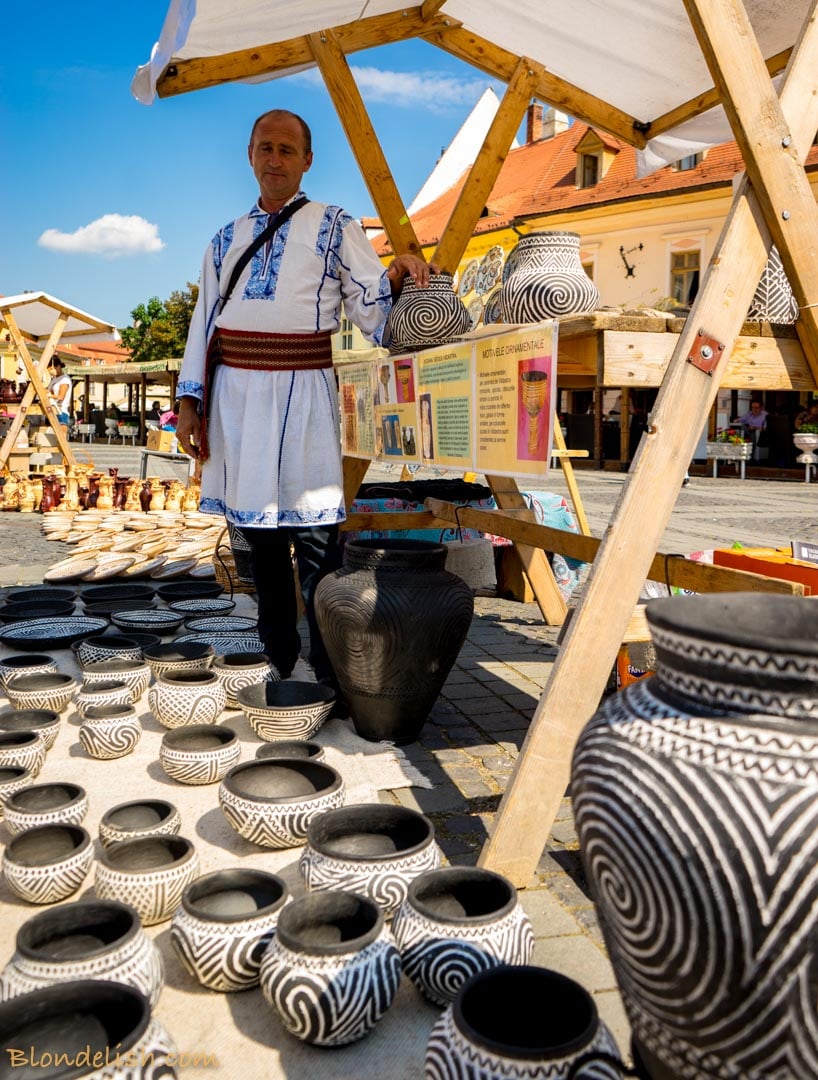 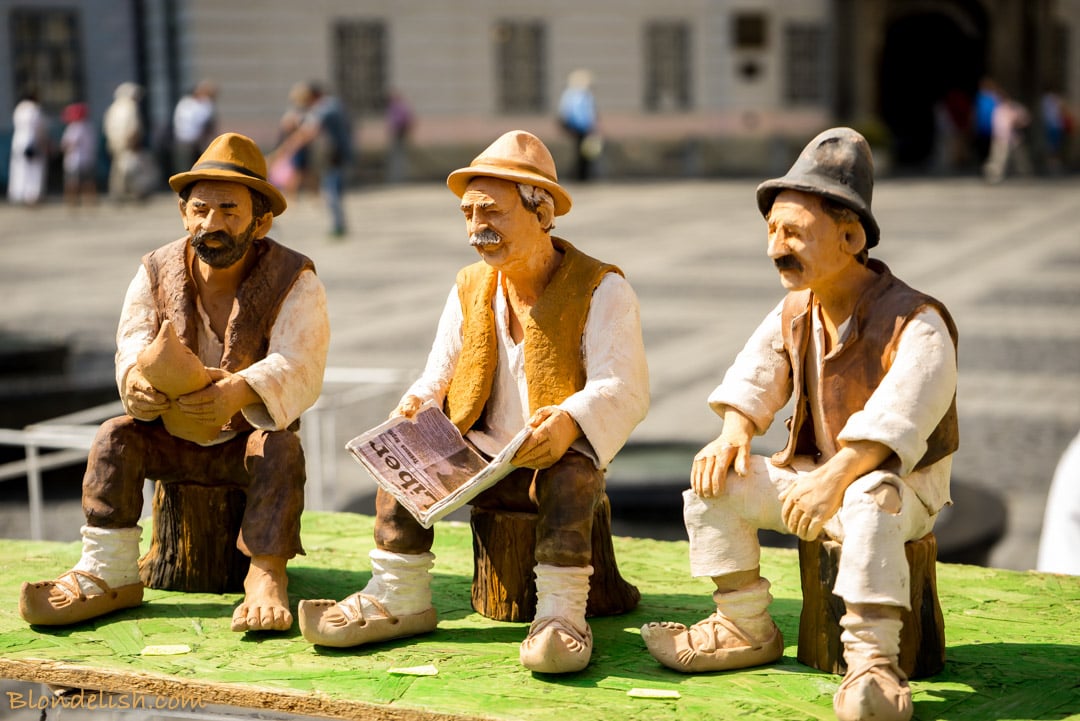 So now we got to the end of our journey in the land of Transylvania. I hope you’ve enjoyed it. If you ever visit these places (or other in Romania) and need suggestions, don’t hesitate to ask me on my Facebook page.

So bye for now, but not for long, because I’m already planning my next trip