If you love salads as I do, then you need to try this Mediterranean Chickpea Salad recipe. It is a variation of the tabbouleh salad and the difference is that I used chickpea instead of bulgur. Follow the video recipe and learn how to make chickpea salad at home. 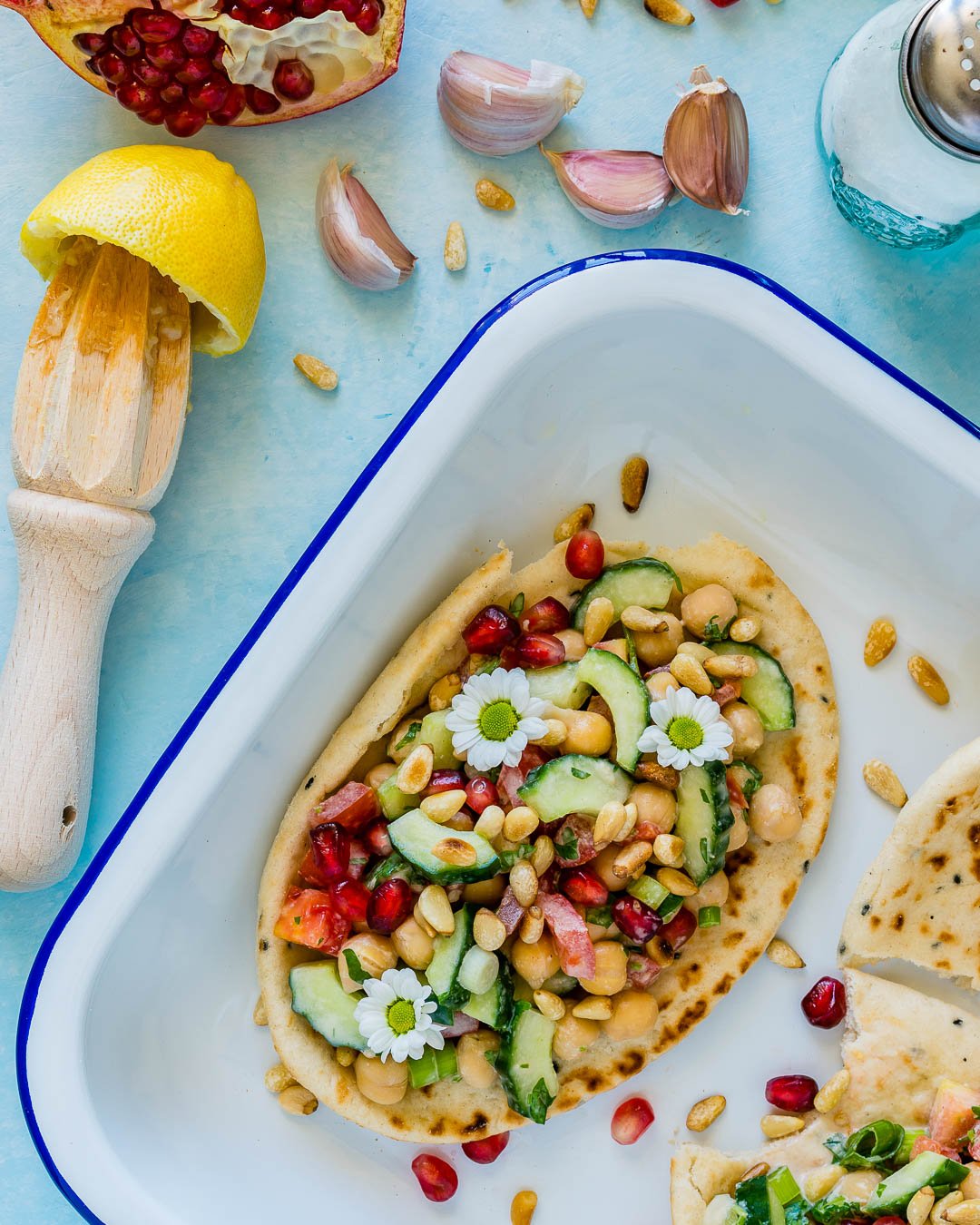 Summer is all about salads, isn’t it?

I mean, we can’t let burgers make us look fat on a nice beach in Ibiza, can we?
I am saving that for winter, when everything is covered :))

But now seriously, for some reason, salad consumption during summer goes through the roof, compared to other seasons.

As for me, I am probably one of the biggest fans. But being a passionate foodie means that I also like to have a filling and satisfying meal. That’s what a lot of salads fail to do.
They might be delicious, but they are far from filling because they lack protein and carbs. 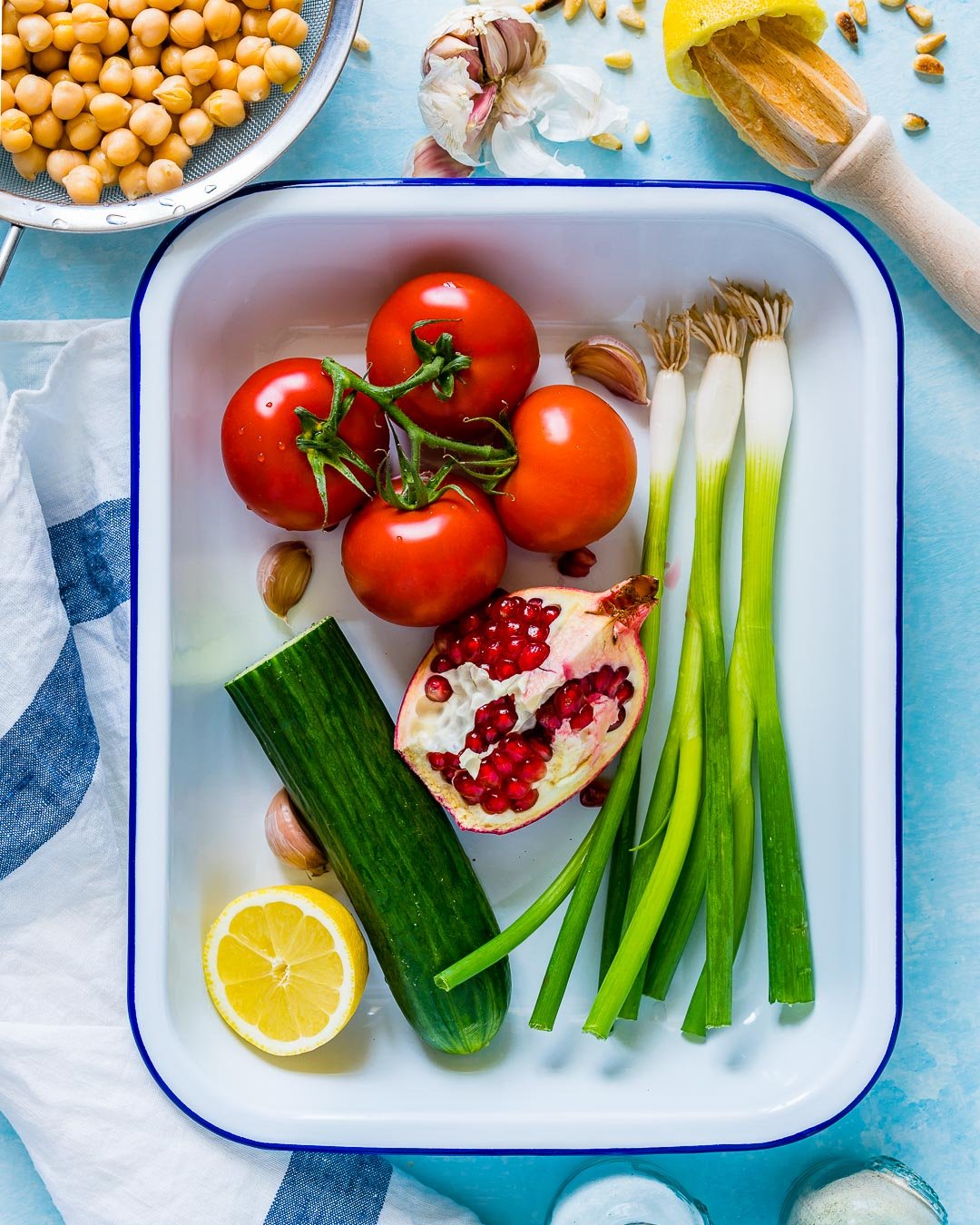 Lots of times when having salads (especially when I’m keeping a diet), I get hungry the moment I finish eating. And eating more of them just to keep me filled, will surely not get me that bikini body for the summer.

So I got inspired by the Tabbouleh Salad and I tried to make it more filling, by adding chickpea. This is a legume popular in Middle Eastern, Mediterranean and Indian cuisines.
And if you are wondering what tabbouleh salad is, I will give you more details about that in a bit.

According to Wikipedia, Chickpea is rich in protein, carbs, and vitamins. We normally get our protein from meat, but this little bean has it all, which makes it a good replacement.

That’s why the Chickpea salad is so filling and you don’t need to serve it with meat. And for this reason, I consider it one of the best chopped salad recipes.

But if you are a foodie that can’t possibly fathom a meal without meat, then you might want to try this Strawberry and Avocado Chicken Salad. 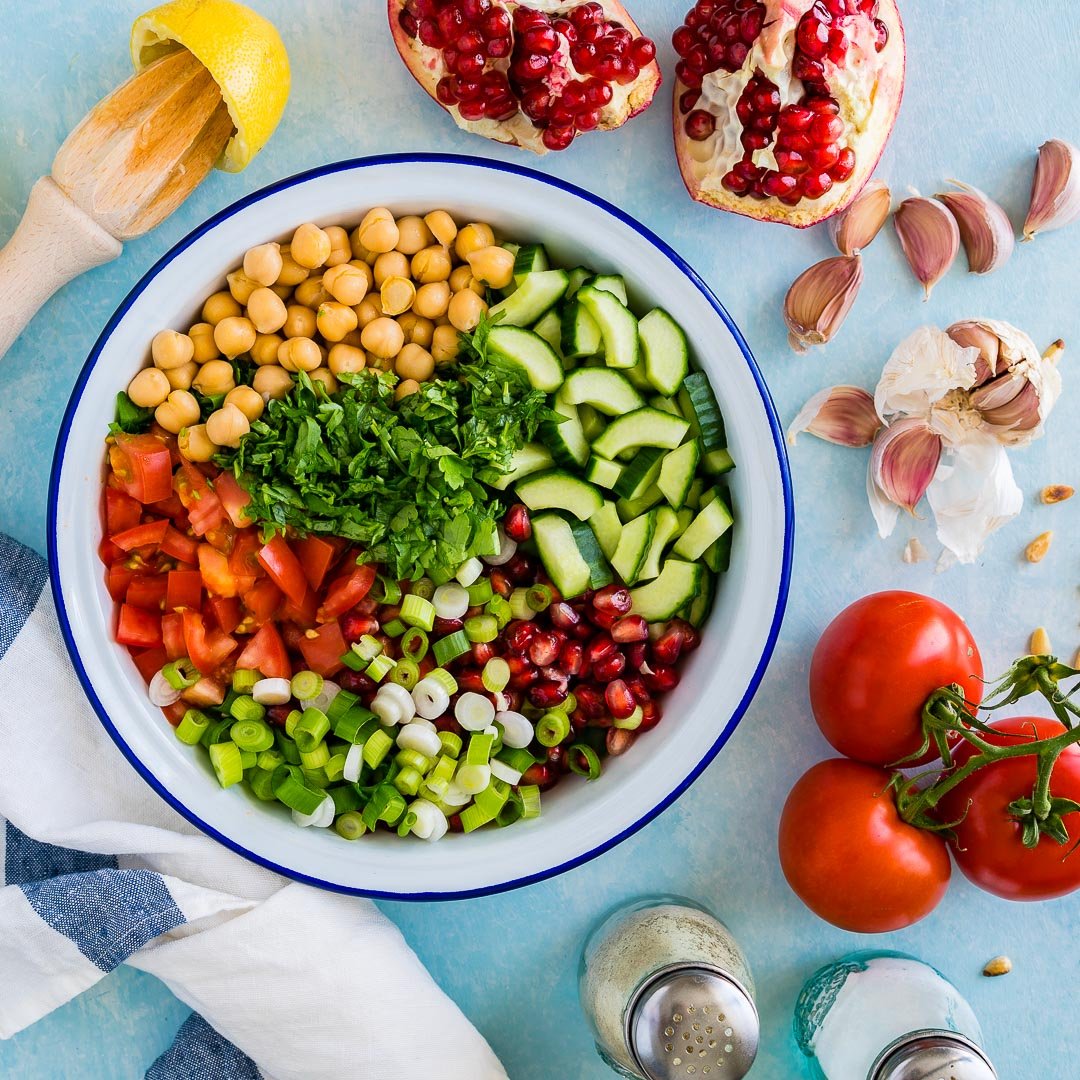 What is Tabbouleh Salad?

Tabbouleh is an Eastern Mediterranean vegetarian dish.
This is a chopped salad made with parsley, mint, bulgur, onion, olive oil, lemon juice, and salt. It also has tomatoes, but some variations replace them with pomegranate.

It is originally from Syria and Lebanon, but its popularity grew across the whole Middle East, making it one of the most popular salads in the region.

There are lots of variations of Tabbouleh, and my Chickpea Salad recipe is one of them. 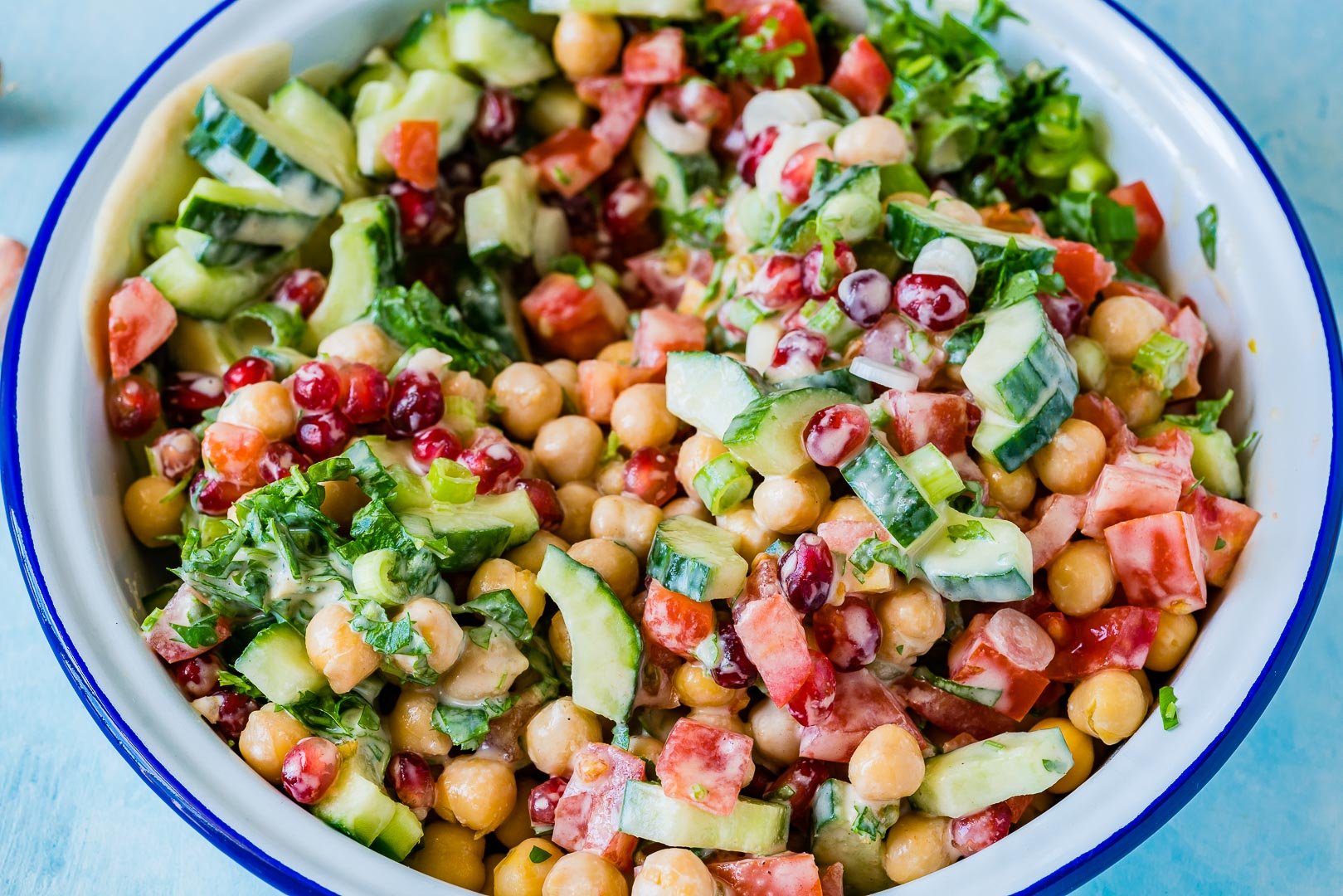 The difference between them is that I replaced bulgur with chickpea.
As I told you above, this makes it more filling because it’s loaded with protein and carbs.

Although some variations replace tomatoes with pomegranates, I decided to use both.
I didn’t use mint, but you might want to try it as it adds tons of flavor.
Instead, I made a delicious Tahini dressing that goes perfectly with the chickpea salad. 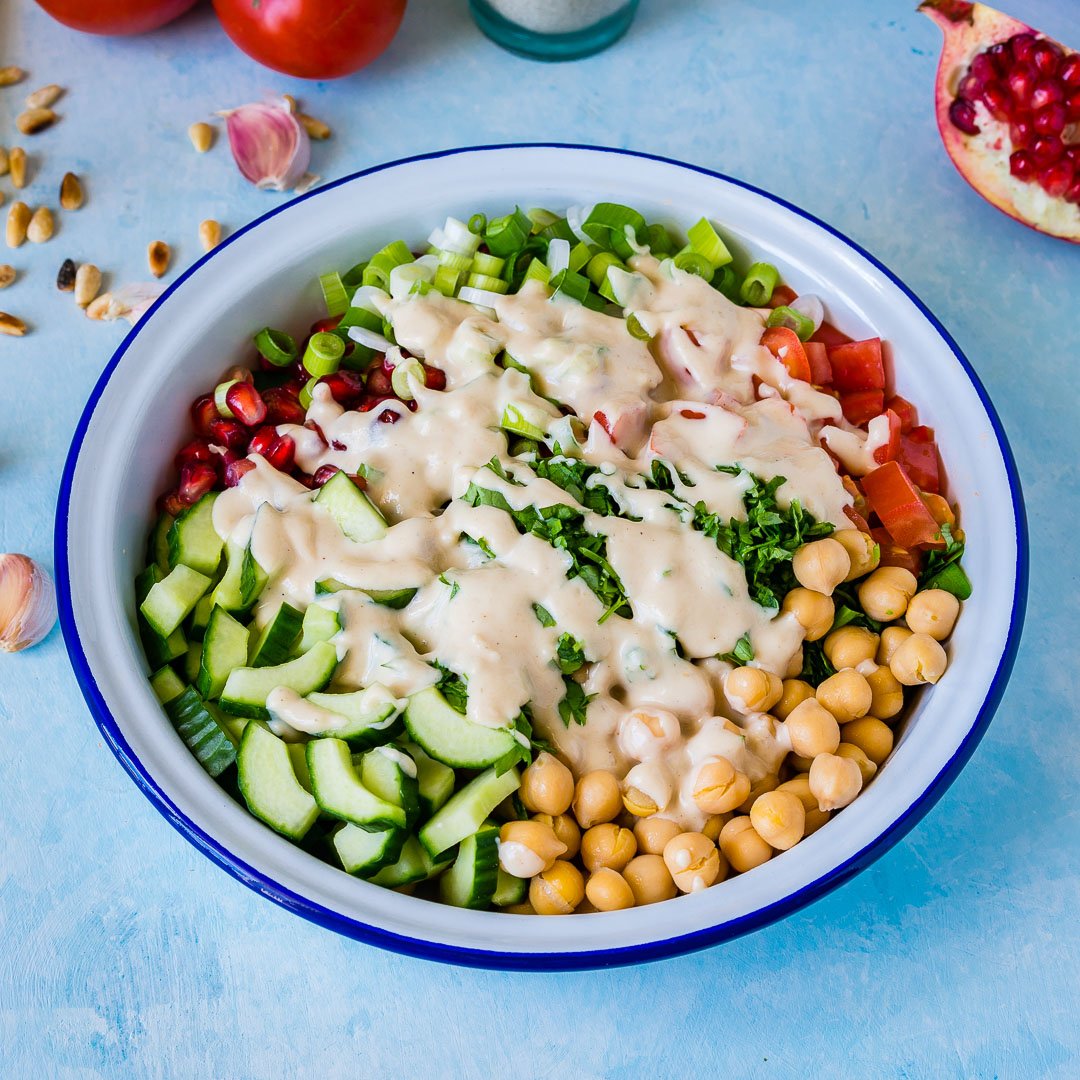 Tahini is a popular Middle Eastern topping for meat and veggies. It is made from sesame seeds and you will find it in most Hummus Recipes.

You can use it as a topping with a number of dishes like grilled or roast veggies and almost all kinds of salads.

I made the dressing for my Chickpea Salad from Tahini, lemon juice, garlic, honey, salt and pepper and I thinned it with a bit of water. It’s really easy to make, just follow the instructions in the recipe below and you’ll make it in no-time. 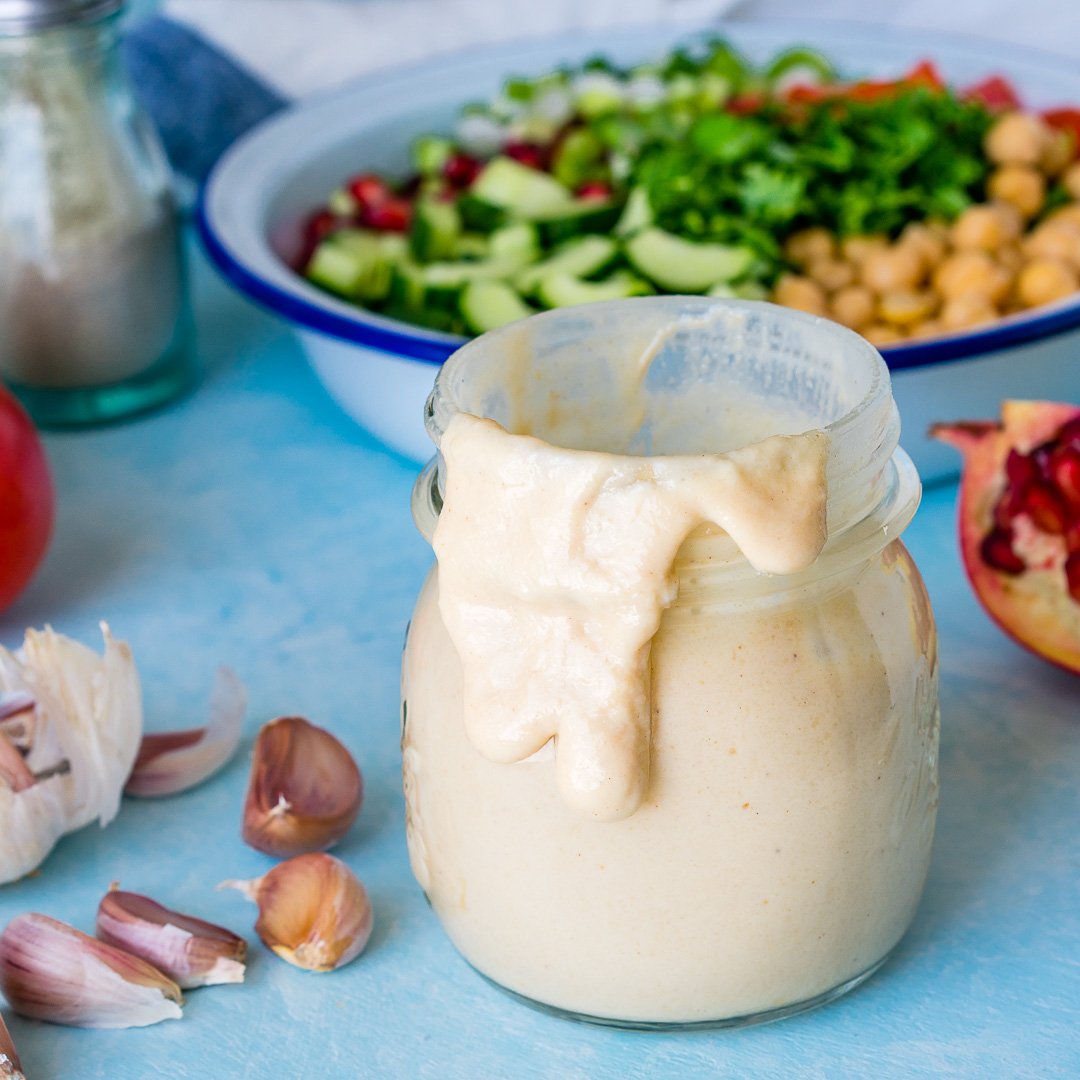 Another reason why I like this chickpea salad recipe is because of how easy it is to make.
All you have to do is chop the ingredients, throw them in a bowl and mix.
That’s it! As easy as it gets

Furthermore, you can use the Chickpea Salad in a number of weight-losing diets and it’s an amazing vegetarian dish. Easy to make, delicious and healthy… what more could a foodie ask for?

As you can see below, I served it on pitas. This is more of personal preference and you don’t have to do the same. But wrapping them in pitas or tortilla is a good way to serve the Mediterranean chickpea salad when you’re on the go, or at work. 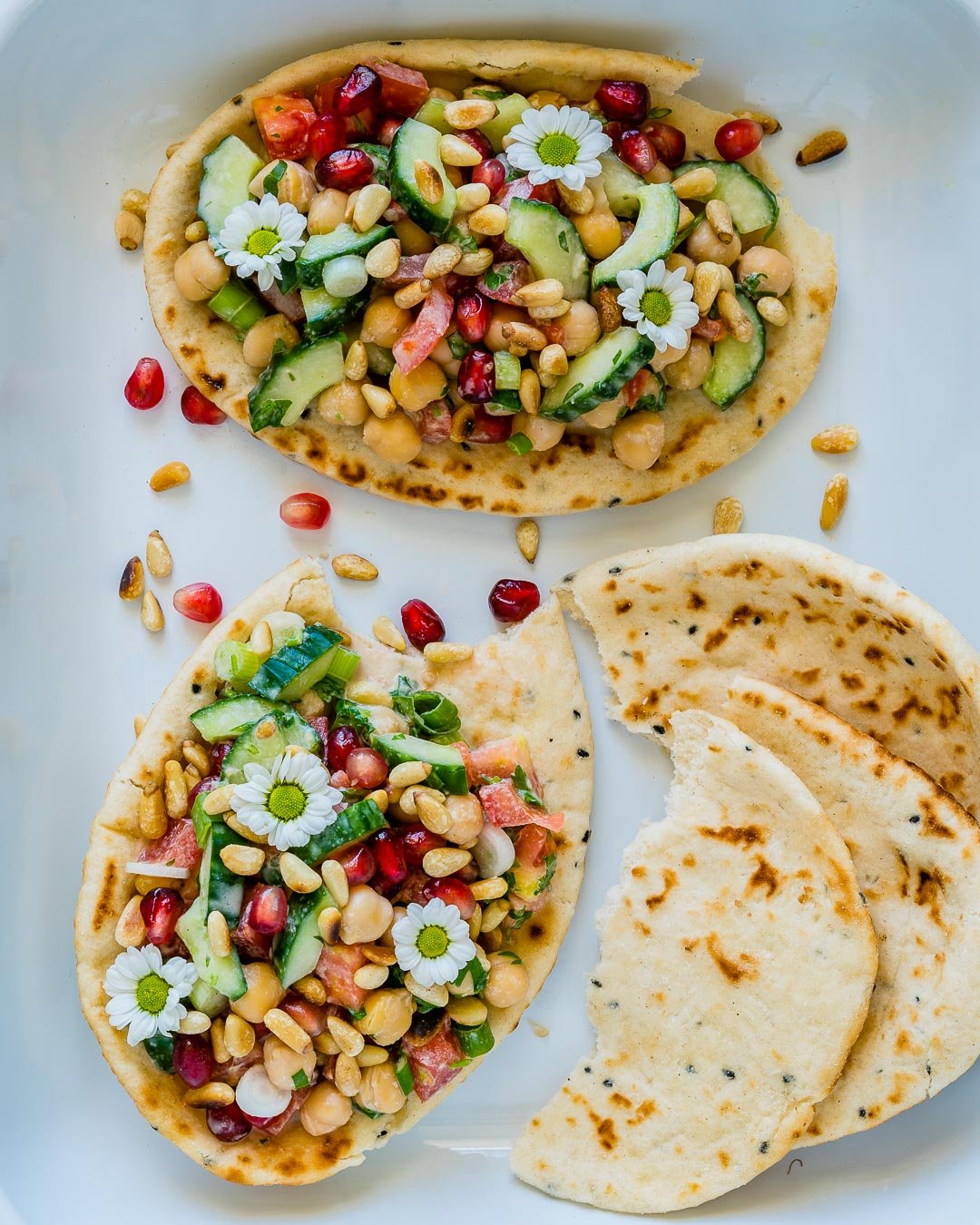 It also makes it even more filling, but whoever wants to lose weight probably needs to stay away from bread. So although it’s a good way of serving the Chickpea salad, it may not be for everyone.

But fear not, it tastes just as good if you have it on a plate.

This simple chickpea salad recipe will surely keep you filled and healthy for the summer. But if you want to keep fit and show off that rockin’ body on the beach then you need to keep a disciplined diet based on healthy and filling salads and smoothies.

By the way, what is your favorite summer salad?

And now it’s time to rock the kitchen.

How to make Mediterranean Chickpea Salad with Tahini Dressing 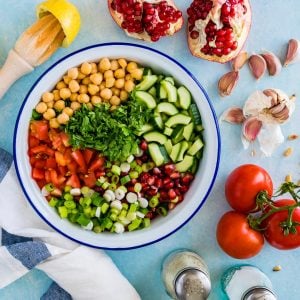